Is this ceiling box wiring correct and how can I reconnect an abandoned 3-way switch to it?

I have a house (Georgia, USA) and some kitchen renovations have revealed some prior electrical work and I am trying to figure it out. Originally, there was a ceiling box in the kitchen with a fan/light fixture controlled by a pair of 3-way switches. One 3-way switch was located at the kitchen entrance to the garage and the other switch was located in a 2-gang box that it shared with a 2-way switch for a ceiling light in the dining area. The fan and light did not have separate switches.

At some point in the past, an exterior flood light was added to the house and the 3-way switch in the 2-gang box was replaced with a duplex switch. One switch controls the light fixture and the other controls the exterior flood light. The 3-way switch at the garage entrance was abandoned and covered with a cover plate. And by abandoned, I mean the 'electrician' bent back the tabs on the switch and shoved the entire switch into the box). The overall layout looks like this: 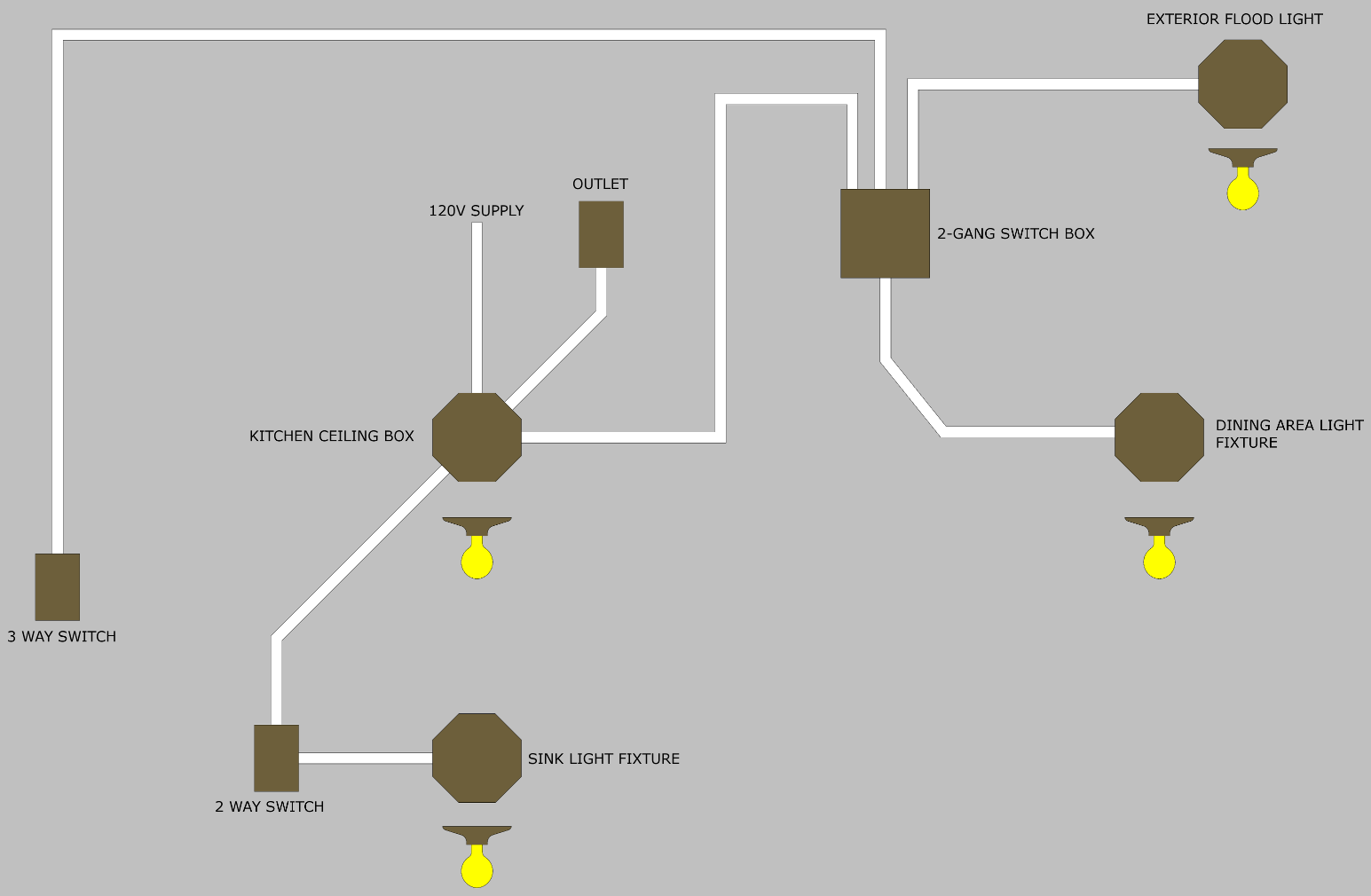 While renovating the kitchen, I found that the fan was mounted to a shallow fan-rated box with wiring from it to a second non-fan-rated box that was just laying on the insulation in the attic. I removed the ceiling fan and the boxes (mentally noting how it was all wired) intending to rewire it (using a properly sized single box) the following day. Due to circumstances beyond my control, the work was delayed several weeks and I cannot remember the exact wiring. I spent a couple of hours with my multimeter checking continuity to determine which wire was connected to what and I think that the kitchen ceiling box and 2-gang switch box looked something like this: 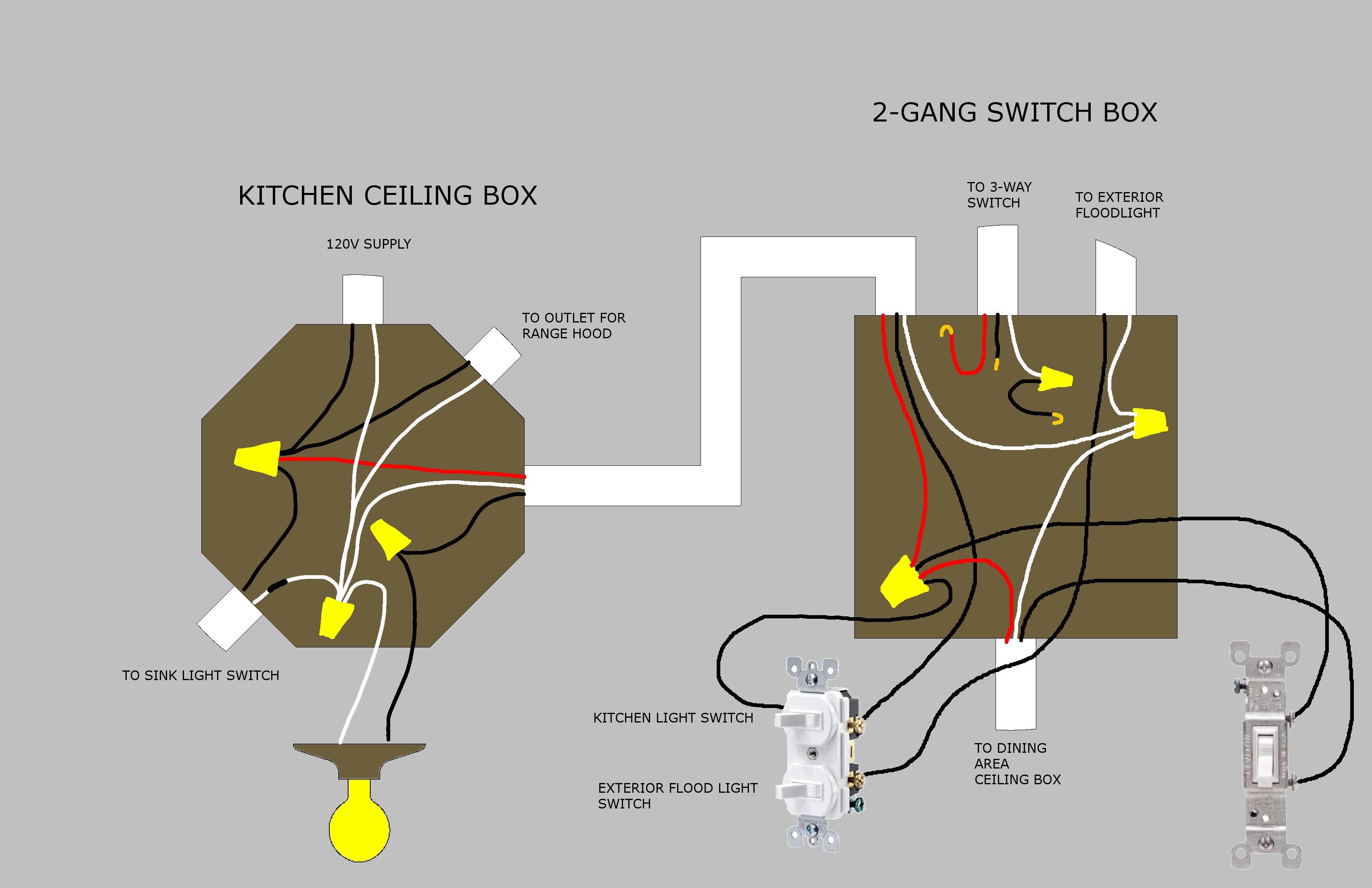 The 2-gang switch box on the right is exactly as I found it. The wires from the 3-way switch were sitting at the back of the box, unterminated with bare conductors exposed. The neutral was connected to the black unterminated pigtail with a wire nut as shown.

Having said all that, there are three parts to my question:

My current plan is to implement the answer provided by A. I. Breveleri with the minor change recommended by RedGrittyBrick to make the constant hots black and the switched hots red. So the final result, if I'm not mistaken, will look like this: 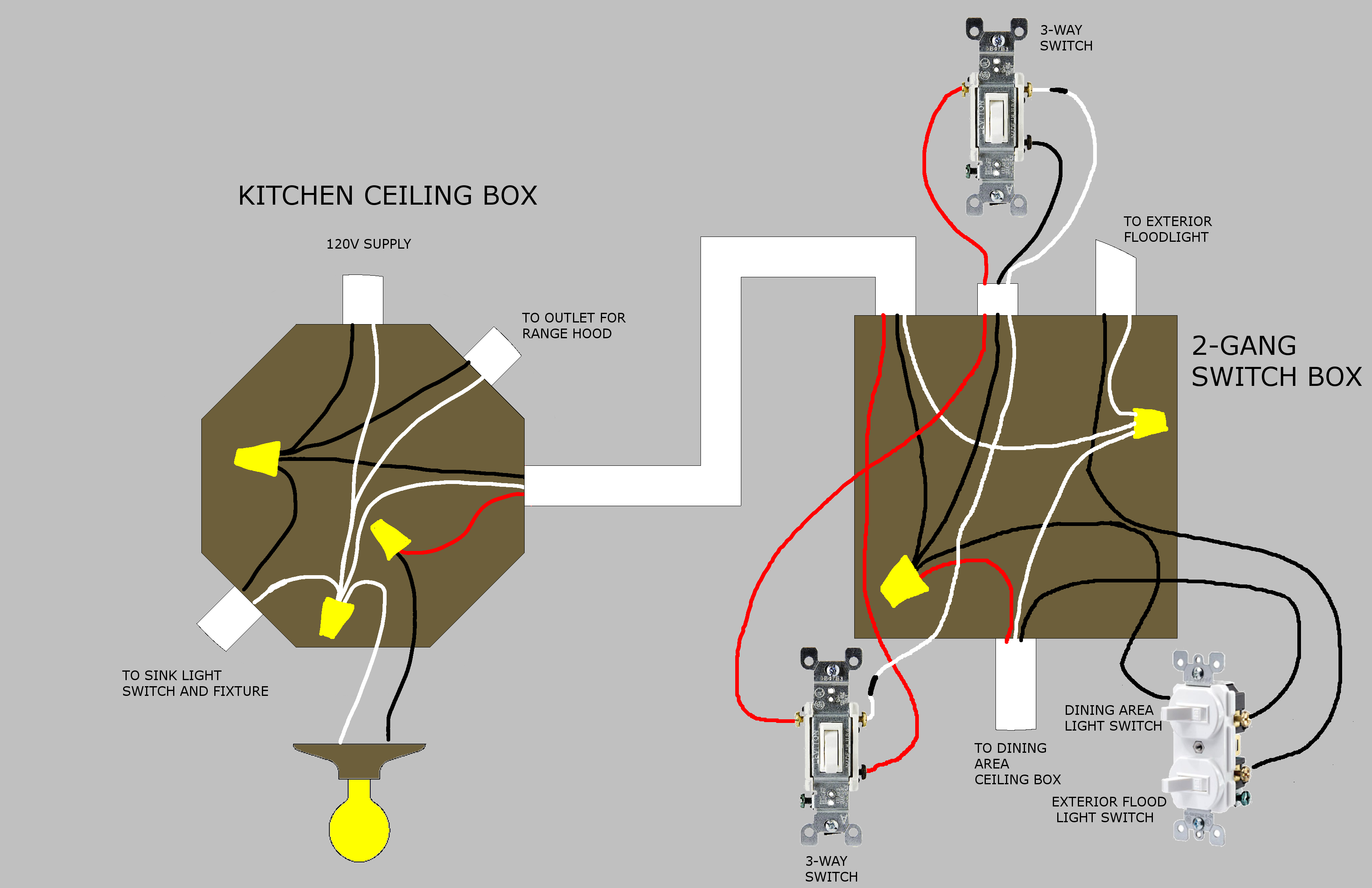 If there are no objections, I'll wire it up this way and mark A. I. Breveleri's answer correct after the lights are on.

Also, in working on this problem I visited many sites that attempted to explain 3-way switches, but the only explanation that made the light bulb go on in my head was here:

"What is common in the diagrams above and with any 3-way switch circuit is that the power hot wire coming into the circuit will always go to the common terminal of the first switch. The hot wire from light always goes to the common terminal of the second switch. The traveler wires go from switch to switch connected to the traveler terminals, it doesn't matter which. As long as you keep this in mind, a 3-way circuit becomes really simplified. And of course the neutral will always go directly to the load."

I think you want to leave the kitchen box alone and rewire the 2-gang box like this. I used blue for the white neutral wires: 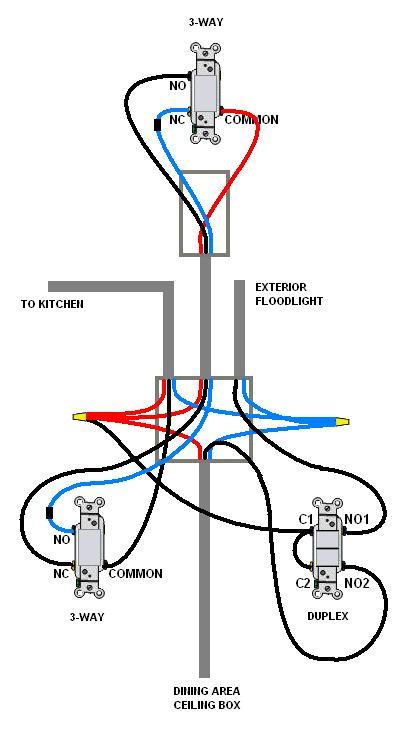 I followed the color scheme of the existing wiring, with the red carrying unswitched hot in the 3-wire cables. Please remember to mark the white traveler with black tape or paint.

You can re-use the duplex you have, but you might want to buy two new three-ways. You could straighten the tabs on the abandoned one but you have to go to the store anyway.

I sent the power to the further three-way first instead of to the one in the gang box because it saves one wire-nut.

That part on the left can't be right. If you closed the sink light switch it would trip the breaker. That is a dead short from hot to neutral.

The black tape is not a mistake. That should be the feed to the switch and the black is the switch leg that returns to the light. Then the light is connected to the neutral with the others.

The black wire to the 2 gang box should be used for the hot or the red but not both. Right now you have the black wire seriesed through the light.

I don't think they make a duplex switch with a three way in it.

Does the dining area ceiling box feed a fan/light? You have a hot feed going to it along with a switch leg.

You are attempting a pretty complicated setup for your first time. There is a little bit of a learning curve to this.

You may need to post a more extended diagram of the devices and the wires running between each.

Edit I see your extended diagram explains the kitchen light switch was not a dead short but just power to the switch. You had the white marked black but have corrected that in your last drawing. Using red for the switched power and travelers is the better method as others pointed out. Your final drawing looks electrically sound. With your current wiring it is not possible, but the NEC requires a neutral at switch locations with a few exceptions. If you are not being inspected you could consider this 'grandfathered' wiring. In the future, you should take a neutral to the switch location.

The octagon ceiling box looks fine provided you change nothing. All whites are neutral and all blacks and reds are always-hot, except the bulb lead which is a switched hot.

Of course you can reactivate the 3-way. The only issues you get into are Code related, as well as the question "Why exactly did the previous owner abandon it?" You may end up finding out.

Now we get into some code issues. This setup was probably legal when the house was built. The 3-way white wire is not marked because obvious switch loops didn't need to be. There's no Actual Neutral going to the far 3-way because Code did not require that. Now it does. Bringing it to current Code would require pulling a 12/4 or 14/4 cable between the two switch boxes.

New work requires upgrading to current Code. A mere switch replacement is not "new work". This kind of rearranging - well it's arguable. This diagram another diy.se question shows how to wire it old-school.

One way to moot the entire matter is go new-tech. Install an appropriate model of "smart switch" in the 2-gang box and a companion remote switch in the remote box. Re-task the white, black and/or red as needed by the companion remote.

If you can tolerate it, I would move the 2-ways to the existing double switch and the 3-way or smart switch in the full-height space. Switches will be cheaper and more available if you do.

Now, about that marked neutral. It is actually a neutral, despite having a marking that is commonly used and required to re-designate white wires as "hot". If this designation is used elsewhere in the house, then I'd argue this usage violates NEC due to being inconsistent (110.12 workmanlike). Otherwise it's, well, debatable.

1
How do I convert a 3-way circuit with two lights into two 3-way circuits that control each light separately?

1
What is this single pole switch to empty ceiling box blows breaker when switched on
1
Can I safely disable a three way fan switch to use for providing ground to remote three way box?
1
Wall switch connections for a ceiling fan and light
3
How-to wire a Fan/Light in Bathroom with power at Switch box and Fan/Light box
1
How is this 3-way switch circuit wired?
3
wiring 3 way switch
2
How can I get this light fixture to light up?
2
Can someone explain if this wiring is correct
1
3-way switch replacement mystery: can I solve it without a meter?
1
"Wrong" wiring for three-way switch