A month ago had the well pump replaced because we had no water.

The plumber said our pump went bad. It was about 20 years old. They told us then that our well depth was 225. We have slowly been losing water pressure since.

We called th plumber back 2 weeks after the pump was replaced and told them this. They said the pump was pulling sediment from it being disrupted. And, to give it time.

We are now 5 weeks from when the job was done and we have zero pressure. Called again and they came out , looked at the pressure tank and said to replace that.

We had them do it and we still have very low low pressure. When you run the shower and sink it goes to drips. If you turn off the sink then the shower gets better, but in 10 mins it goes down to a drip.

Does anyone have any suggestions that could be the problem?

I have asked the plumber to come back and would like to maybe have some suggestions so I could address them with him.

Since this is a DIY site, here are some things you can check:

Next to the pressure tank, you should see a gauge like this 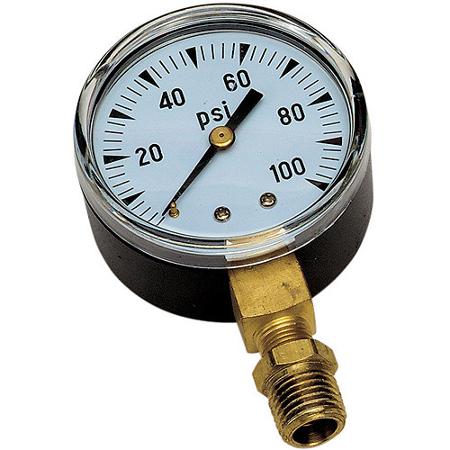 This tells you your water pressure. With no water running, this should not be moving. If it is, you have a leak.

When you turn the water on, the pressure should drop to a certain point. Maybe 40 psi, at which point, you will hear the pump kick on and the pressure should start to increase. At that point, turn the water off. The needle should go up to a certain point, maybe 60 psi. I would venture to say that 40/60 is a pretty common setting for household use. The lower number is the cut-in pressure, the higher is the cut-out pressure. If all of that looks good, move on. Otherwise, you now have some questions you can ask your plumber (or a different plumber). For example, why am I set to a 20/40 or why is the pressure dropping when no water is being used?

The next thing I would recommend checking is that the tank is properly charged. To do this, you will have to turn off power to the pump, usually at the breaker box. Then open a faucet that is as close to the tank as possible. Ideally you would have a faucet right at the tank and a shutoff just after that faucet. Close the shutoff then open the faucet that is right next to the tank (make sure you have a bucket to catch the water). Let that run until it is entirely empty (no more water coming out). 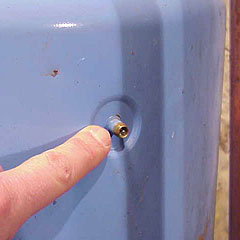 Most likely it has a cap on it that you can remove (just like a bike). Remove that cap and use a tire pressure gauge to measure the pressure. It should be about 2-4 psi less than the cut-in pressure. So, if you were seeing 40/60 in the measurement you took earlier, the tire pressure gauge should read between 36 and 38. If it doesn't, that is a problem and you should ask your plumber about this.

The next thing to do is to time how long it takes your empty tank to fill up. After making sure the faucet is off, turn the power back on. The pump should immediately turn on. Time how long it takes for the tank to fill and the pump to turn off. It should be fairly quick (60-90 seconds). If it is taking longer than that, you could have a leak between the pump and the house.

If that is all good, the next step I would take is to turn on the shower and the sink at the same time, then go watch the pressure gauge. It should drop to 40 then you should hear the pump kick on. With a properly operating system, even with both a shower and a sink running, you should be able to reach 60 psi again and it should cut off. At which point the pressure should drop back to 40 and the pump would turn back on.

If that is not happening. For example, say you see it drop to 40, you hear the pump turn on, but the pressure keeps going down, eventually to 0 or very low, there are a number of problems that could cause this. You have a brand new pump and tank, but it could be an underpowered pump. How many horsepower (HP) is the pump they installed? It could be that the well is not producing enough water. Do you have air in your pipes?

This info will hopefully help you figure it out. If you aren't comfortable doing these things yourself, find a good well company in your area. These are all the things they should be doing first. Some other things they should do to diagnose the problem are:

They can also measure how fast water is moving into your well. If water is not moving in fast enough, you would run out of water. There are things they can do to fix this.

Although you have a deep well could it be going dry? Is the pressure tank properly charged? Is the pressure switch set high enough. What is the well flow rate? Do you need to add a large cistern. These are all questions I would be looking into. One last one could sediment be stuck in the foot valve so when the pump turns off the water drains back down then it would take a while to build the 250' of water back up and start providing pressure.