Is framing with screws legal?

A friend used trim head screws for ALL of the 2x4 framing (including the outer walls) of his 2400 sq. ft. house. The house uses 8x8s to carry the load; none of the 2x4 framing is load bearing. The inspector did not see a problem with it (but maybe she didn't even see the screws).

Edit- the picture below shows a similar (post and beam) style of building. The original building was a wood/furniture shop (not commercial); it was erected about 20 years ago (±5 years). The old exterior walls were removed (I don't know anything about them); the new walls are 2x4 construction with trim head screws, including the exterior walls. The friend is a maintenance guy... not an engineer.

Is it built to code? Would it be correct to assume that (at least) the outer walls are in danger of windy conditions and earthquakes? 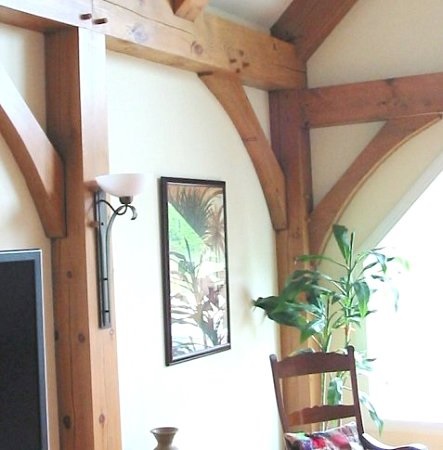 If by some chance these screws are equivalent to 16d nails, then they should be acceptable. However, I doubt they're equivalent, and therefore should not be used.

There's no specific fastener schedule for interior nonbearing walls, while interior load-bearing walls are required to be framed the same as exterior walls.

You have a complicated question here and the best (and most legally-correct) answer will probably come from talking to your local building inspector. Preferably before a lot of work has already been done...

First, the question of which building code is even applicable is not clear to me. The International Residential Code ("IRC") only applies for 1- and 2-family homes, but this sounds like maybe it is a commercial structure in which case the International Building Code ("IBC") would apply. The exact version and any local amendments (which can be significant, by the way) would depend on your specific location.

The IRC does provide some pre-computed nailing patterns for wood-framed that Tester101 has quoted, but those only apply to light-framed platform or balloon-framed structures (see R301.1.2). It sounds like this structure is probably not that, since you have heavy timber columns. It could be post-and-beam or some other construction technique. In which case the structure needs to be designed by an engineer. (Or maybe the heavy timber is just decorative?)

Finally, screws can be used for structural purposes but they must be designed as such. If you are straying outside the prescriptions of the building code you need to have an engineer do the design first.

The SDWS Framing screw is designed and load-rated for replacing 16d, 10d and 8d nails in framing applications. The SDWS Framing screw is 0.160" in diameter and superior to nails in holding power and pull-out resistance. It is code listed under IAPMO UES ER-192 and meets 2012 and 2015 IRC® and IBC® code requirements for several common wood framing applications.

This line in the question and the picture says it all,

"The house uses 8x8s to carry the load; none of the 2x4 framing is load bearing"

This picture is a wood peg post frame building all the structural strength is there, if there was red vertical siding on the outside it would be called a barn.

Adding 2x4 framing between the outer side of the posts would just increase the strength and prevent racking of the posts, basically it would be built better than a brick sh*thouse.

While the heads on the screws aren't the best for the application the 2x4 walls would need to deal more with strain from the weight of the siding/stucco on the outside of the walls than holding up the building.

Basically it would have to rip a screw through the 2x4 sideways or snap them all from the weight of a 6' to 8' section of siding and drywall.

Not the answer you're looking for? Browse other questions tagged framing code-compliance screws timber-framing building or ask your own question.

1
Can I frame using screws?