How to go about building an aquarium into a wall?

I plan to install a 180 gallon aquarium in my basement. The dimensions are 72" x 24" x 25" About 2000 pounds after sand and decorations when filled

How should I go about doing this without having structural issues in the future?

I am not a licensed carpenter but I have replaced walls and doors in my old house. Here is how I would do it.

I think you should not try to use a cantilevered or bracketed shelf for this. Make a strong table to hold the aquarium.

In the following I am assuming wood construction, with your walls made of the usual 2"x4" studs and wallboard.

The front edge of the table can rest on the bottom edge of the opening, with the back edge resting on four legs.

When you make the opening, cut the lower studs 4 inches shorter than the finished opening, and frame the lower edge with two 2"x4" standing on their short sides. This forms the front edge of the table frame. Don't worry if the ends of the edge don't line up with the studs.

EDIT The single 2"x4" studs may not be strong enough to serve as legs for such a heavy load. You should add more short studs by inserting them into the lower wall and nailing or screwing through the drywall. If the boiler side of the wall is unfinished then you can toenail the new studs but this is not strictly necessary.

Make the side and back edges of the table frame similarly of paired 2"x4" nailed or screwed together.

The surface of the table can be of lighter construction because an aquarium rests on its own lower edges. The table surface serves mainly to keep the frame rectangular. 1/2" plywood should be enough.

The legs can be more paired 2"x4" or single 4"x4" each. Use four legs evenly spaced along the back edge. 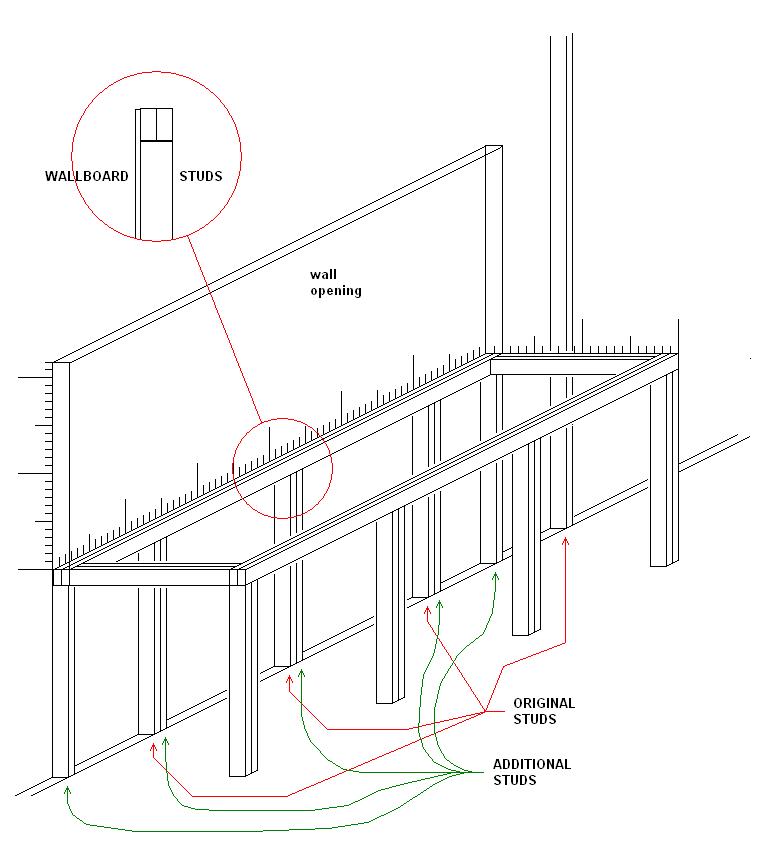 You will have to figure out a way to keep the bottoms of the legs from being accidentally moved during any future work in the boiler room. In my house I would use a sill plate nailed directly to the concrete floor. You might want to use angled braces from the frame to the foot of the legs. Make the braces of 1"x3" or 1"x4".

Give the whole construction a couple of thick coats of paint to keep the splashes from soaking the wood and starting wet rot.

A. I. Breveleri provides a good starting point but I'd beef everything up to 2x6s and you'll definitely want some cross members front to back in the top of the stand. As A. I. mentioned you need something to keep the legs from moving. I'd build another frame like the top around the bottom.

Since this is for an aquarium being level is VERY important. Not only will the water always be level and will look strange if it's not even with the tank you can actually crack the aquarium over time if it's not sitting completely flat.

Finally, putting all this in the boiler room isn't necessarily the best idea. Those 200 gallons are going to evaporate and salt will splash everywhere. Make sure you have an exhaust fan to deal with the humidity and good space (preferably a barrier) between your pricey tank and pricey HVAC equipment or you'll be replacing the latter sooner than expected.

I have one of these and it's a ton of work but looks great.

Not the answer you're looking for? Browse other questions tagged foundation structural or ask your own question.

22
Is my rapidly failing foundation dangerous?
3
Are these foundation issues significant?
0
Plywood over rigid foam over concrete: will I have moisture issues?
0
Best way to parge exterior stone foundation wall
0
Help needed identifying major structural issues
5
Can this water damage be explained by lack of gutters and grading issues?
2
Can my house support a bathroom addition?
1
Address water emerging from slit in concrete basement floor left by sewer line replacement
14
How do I self-repair a section of crumbling basement wall, or should I hire a professional?