Is it safe to mount a surge protector strip behind a wall-mounted television?

Is this safe? Nothing is run through the wall. 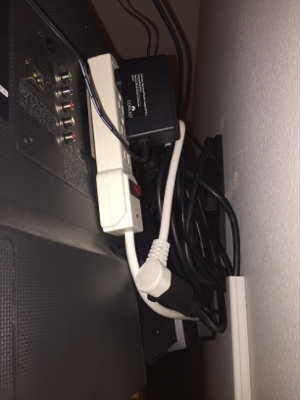 Technically, this is not okay. Wiremold® and other similar products are not typically listed for use with power-supply cords, cordsets, or other similar cables. They're designed to contain data, communications, and audio video cables. See this answer for more details.

Check the manufacturer's documentation, to determine exactly what types of cables are allowed in the specific product you're using.

As for plugging the surge strip into the extension cord, that's definitely not allowed. There should be a label on the strip, or in the documentation included with the strip that says not to plug it into another strip of extension cord.

The common solution to this problem, is to use a kit designed for this, like the one described in this answer. Though with a system like this, you'll have to cut holes in the wall.

If the wire management channel is a listed raceway, then you shouldn't be running power and communications cables through it together. Unless the raceway is divided for the entire length.

(A) Separation from Other Conductors.

Yep, no problem at all. The setup should be under 250 watts (TV plugged into cable box). If the extension cord ever gets warm to the touch, then you'll want to go to a thicker wired extension cord.

Not the answer you're looking for? Browse other questions tagged extension-cord television extension or ask your own question.

42
How do I run wires for a wall-mount flatscreen TV?
3
Can I run NM wire through this type of flex legally

1
Power Strip/Extension Cord on TV stand
2
Can I use an extension cord for a mini fridge?
1
Is it safe to pull a continuous 18 amps from a 15 amp outlet?
2
How to run an extension cord through a tight space
1
Is it OK to run NM-B cable from outlet behind TV to surge protector?
1
Passing a generator extention through a wall for use in a power outage
0
My house is flooding and I have things plugged into an extension cord that is getting wet what do I do
2
The plug for my laptop is slowly changing colour, is it still safe to use until I get a new one?