I recently moved in to a new apartment that has a gas range and oven. I have never had a gas stove before, and so I am not sure how it should work.

While cooking the other night, our Carbon Monoxide detector went off. I was using the fan on the hood, and could "see" the gas/exhaust being sucked up into the hood. I opened the windows, and turned off the oven, and we were fine.

After inspecting the hood, I am curious to know if this is how it should be set up. 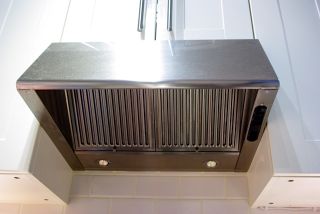 Here is the hood above the stove. 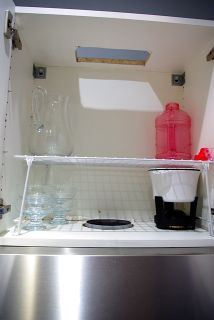 Here is the opening that empties into the cabinet above the hood. 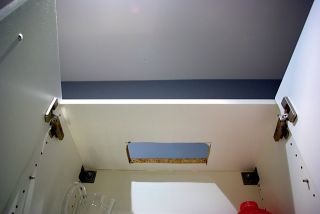 The hood doesn't vent outside of the kitchen, just flows up into the cabinet and out the hole cut into the top into the room.

Can anyone direct me to where I can get a definitive answer on whether this is a real issue? My landlord disagrees and says "modern gas ranges do not emit carbon monoxide"

All gas appliances must be vented so that CO will not build up in your home, cabin, or camper.
Never burn anything in a stove or fireplace that isn't vented.

I would like to know if I need to get out of this apartment, since the landlord refuses to acknowledge this as an issue, or whether he actually is right, and there is nothing to worry about.

EDIT: This is in Chicago, IL if that helps anyone.

I would say that this is highly dangerous. It is against US and Canadian code to not have outside ventilation for any fuel-burning appliance in your home; that's your furnace, HWH and stove/oven, assuming all are NG or propane. It is only acceptable to have a "filter-only" vent hood for your stove if it's all-electric (which BTW is the case for every single apartment I've ever rented; gas appliances may be cheaper on utility bills in the US, but a gas stove is a huge fire hazard and general liability for any landlord).

The code is in place for a very good reason; not only can inefficient burning of fossil fuels produce carbon monoxide and smoke (both of which continue to cause damage long after you've reached fresh air), but even when these fuels burn ideally, they remove oxygen from the air and replace it with CO2. CO2 in itself is not toxic in the same way CO and soot smoke are; as soon as you reach fresh air the symptoms of CO2 asphyxia begin to dissipate, while soot and CO poisoning ("smoke inhalation") can kill you hours after you reach fresh air. However, the consumption of oxygen and production of CO2 in a space with inadequate ventilation is a double-whammy for anyone in the same space; the oxygen is being consumed so there's less of it even in upper strata of the room's air, and as the CO2 builds it settles downward in a "blanket", pushing oxygen up towards the ceiling and away from you.

As the CO2 level builds, your body's natural "inhale/exhale" reflexes go haywire in a Catch-22 condition called hypercapnia; your natural breathing while in a high-CO2 atmosphere actually increases the CO2 levels in your blood, but the only thing your body can do to reduce CO2 levels is breathe. So, you start hyperventilating, which only exacerbates the problem. Should you pass out from lack of oxygen, you will not wake up if someone else doesn't get you out of the room or get some ventilation of fresh air through it.

Your landlord is running illegal housing. However, he may not know it, so be nice at first. Follow standard procedure for maintenance requests, and ask the landlord to install a proper outside vent line for this fume hood. If he refuses or drags his feet, you can call in the city's Code Compliance officials, or federal HUD (Housing and Urban Development) representative, and they will MAKE the landlord comply. Depending on the terms of your contract, the landlord may be giving you a free out by not living up to his end, meaning you may be able to break the lease at no cost if this has gone on for some time with the landlord's knowledge and inaction.

Understand that the cheapest way for your landlord to fix the problem with tenants still occupying the units may well be to cap off the gas feed and replace all the gas cooktops with the cheapest electric setups he can find. If this was the reason you moved in, and you don't get a "free out" from this debacle, you may find yourself stuck with a spiral-coil POS.

There's two issues here. The first is the CO alarm. SOMETHING is wrong. It may be the stove, or some other combustion device in your house, but it's definitely something to pay attention to. I'd suggest getting a second CO detector and place it around the house and monitor the levels carefully. If it's the stove, it's less of a ventilation issue and more of a combustion issue with the stove...maybe it just needs a cleaning. Maybe you need a new stove.

The second issue is that hood vent. This is one of the more hilarious installs I've ever seen. Your landlord has an exhaust hood without it exhausting. It's just going into a closed cabinet. If you leave it as-is, that's OK, but it means you will have to take off the cabinet doors and remove everything from that cabinet so at least you get a circulating effect.

What is bizarre is that that appears to be a relatively high-end vent hood for an apartment. Why they invested money in that, but not properly installing it is a bit confusing.

Have a look at the 2006 International Residential Code. Here are a few sections that may apply.

The air removed by every mechanical exhaust system shall be discharged to the outdoors. Air shall not be exhausted into an attic, soffit, ridge vent or crawl space.

Exception: Whole-house ventilation-type attic fans that discharge into the attic space of dwelling units having private attics shall be permitted.

Range hoods shall discharge to the outdoors through a single-wall duct. The duct serving the hood shall have a smooth interior surface, shall be air tight and shall be equipped with a backdraft damper. Ducts serving range hoods shall not terminate in an attic or crawl space or areas inside the building.

Exception: Where installed in accordance with the manufacturer’s installation instructions, and where mechanical or natural ventilation is otherwise provided, listed and labeled ductless range hoods shall not be required to discharge to the outdoors.

Domestic open-top broiler units shall be provided with a metal exhaust hood, not less than 28 gage, with ¼ inch (6 mm) between the hood and the underside of combustible material or cabinets. A clearance of at least 24 inches (610 mm) shall be maintained between the cooking surface and the combustible material or cabinet. The hood shall be at least as wide as the broiler unit and shall extend over the entire unit. Such exhaust hood shall discharge to the outdoors and shall be equipped with a backdraft damper or other means to control infiltration/exfiltration when not in operation. Broiler units incorporating an integral exhaust system, and listed and labeled for use without an exhaust hood, need not be provided with an exhaust hood.

Make sure to check with your local government to determine what codes apply in your area.

To answer your question directly (without looking at the obvious issues), no it is not very dangerous. MANY people have stoves / cooktops without any hood, or if they do, they simply filter the air and blow it back out into the kitchen. Many of the over range micorwaves do this as well. These filters would do nothing to filter the CO.

You would need to be cooking at a high temp for a VERY long time to reach a level that the CO detector would go off. I have never heard of a coooktop doing it, although I have heard of a gas oven doing it when left on for hours at a time.

So to be short, NO, it is not dangerious. But obviously it is not being effective and it relatively useless as it.

That is the most absurd set up I've ever seen and Yes it is dangerous. The toxins are built up accumulatively however the end result could also be overnight depending on the way stove is running. Chances are with a landlord allowing a set up like that I wouldn't trust it. Your family is to important. Write her/him an immediate letter and include the housing code she/he is in violation of. Giving her/him knowledge of the problem(as if they didn't know) will put the ball in their court. Make a copy and cc at bottom. Cc: Dept of HUD Housing Sign it and personally hand her/him letter. This is an urgent matter.

There are multiple purposes to an external vent for a cooking appliance. I would focus with the housing provider/landlord on the issue of odors and grease permeating the unit, and moisture from boiling and burning activities and the affect on the unit (doubly so the particle board cabinet).

No, not all gas appliances are vented. It's a good idea to, but they're not.

The CO alarm it its own thing. That's not normal. Has nothing to do with the lack of hood, it's not normal at all. Immediately get a recording model that can give you a CO level, and install it. You can very reasonably as the housing provider to pay for that (asking first is generally better, you can insist in most States).

Not the answer you're looking for? Browse other questions tagged ventilation gas stove or ask your own question.

5
Is an exhaust fan over a gas range required?
0
Can I install a (probably ductless) range hood against brick?

0
Finding and installing a carbon monoxide/natural gas detector
0
How much will a damper clamp increase my energy costs?
1
Ontario kitchen reno: does a gas range require a 240V 50A receptacle?
1
Range hood installation for non built-in stove
1
installation of portable ac unit in garage with a gas water heater
0
New gas range setting off smoke/gas detectors
1
Why is my gas oven no longer heating?
0
What's the proper way to connect a gas line in a cabinet to a stove?