I am going to build a small deck for a front porch to replace a concrete slab. The slab had a column that held up a post going to the roof above.

If I replace the slab with a deck, the corner post needs to go through the deck to support the roof overhang of the house above it. What are my options for accomplishing this? Should I have a post go all the way from a footer to the roof and then attach my deck to it somehow? What are the choices? Notching? What about making my footer come up high enough so that the rim joists of the deck can rest on it? Another alternative might be to pour or build a column of concrete (with brick or stone on it) and then attach the deck to that somehow.

The picture shows the old column that I tore out. There is a temporary support in place now. The old column was hollow, made from 1x lumber. Should I go back with a solid 6x6 post?. That seems overkill, not to mention how heavy it would be to lift it up there.

Thanks for any and all ideas. 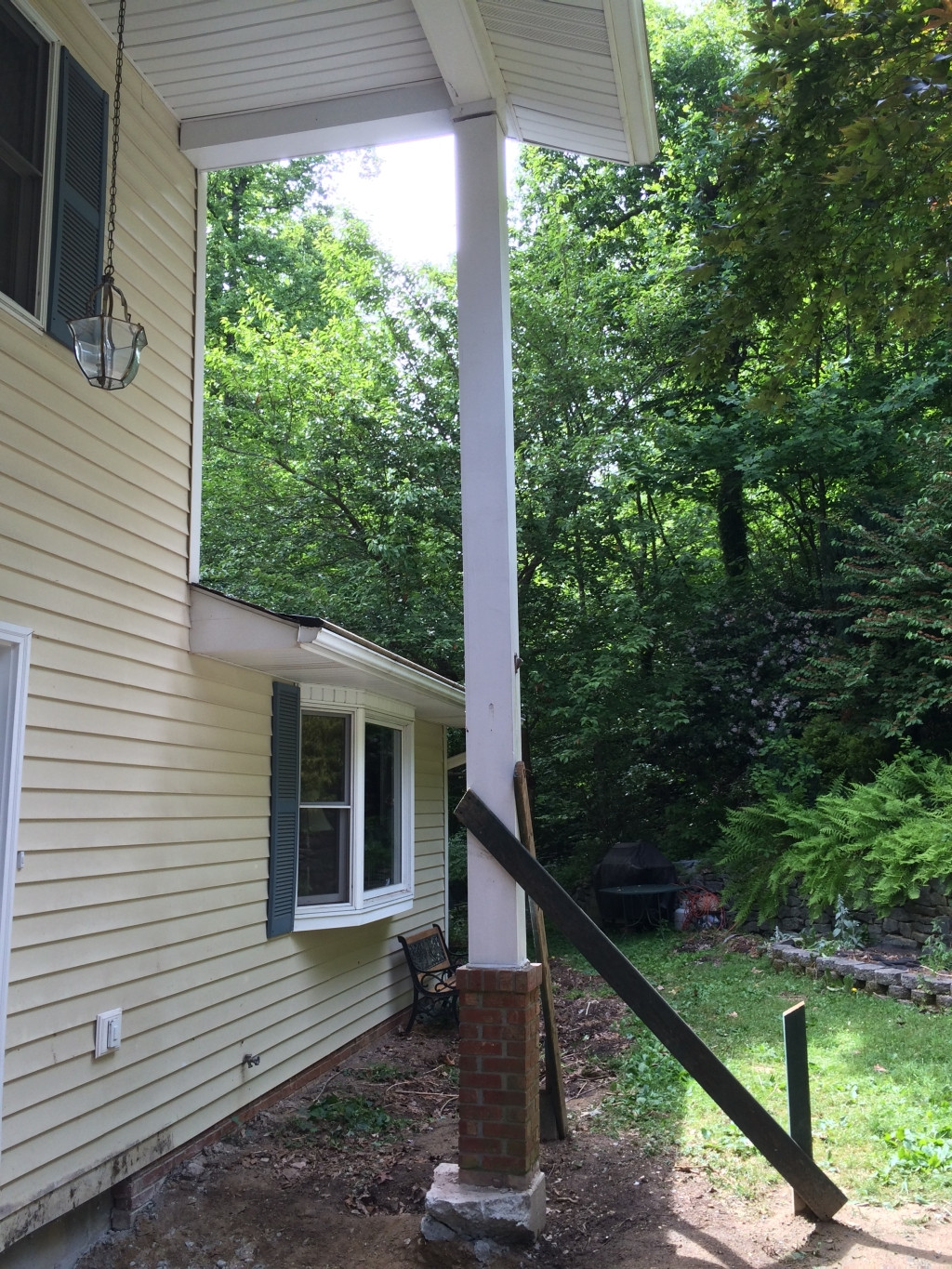 It is mostly a style and preference choice. The original half inch lumber post is probably not structural, though it could well have been a cheap replacement for one which was more substantial. From what I can see of the eves, a 4x4 or 6x6 post is appropriate. Some jurisdictions require heavier columns beyond a certain length, usually about 10 feet. Raising a 6x6 post is not that hard with a helper or two, or straightforward solo job with block and tackle attached to the temporary support.

A properly designed and built deck should have no trouble supporting a post. You could build the deck with an equivalent support which is not in the way: slanted support, temporary horizontal truss, etc.

If you like the look of a stone or concrete base, it should not rest on the deck. Build it into the ground (depth as required for freezing conditions in your climate) and finish the column on top of it. Build the deck around the column—it does not need to be tied together and it is probably better there be a small gap (1 inch?) to allow for independent settling.

You could also support the roof with a 45° to 60° post fastened to the side of the house.

Not the answer you're looking for? Browse other questions tagged deck column or ask your own question.

3
What is the right way to mount a support column to a deck and to a header?
1
Where is the ledger supposed to attach to the rim joist?
4
Can I use post being sunk for a sail shade as corner support for a deck?
2
6x6 Deck post repair, Joining two 6x6 posts
0
Proper Method of Beam to Colum for two story column?
0
Proper deck post-beam-post connection