A closed breaker has some voltage going through - how is that possible?

Some background first: I have a single-phase system (220V). I installed an RCBO direct from the external supply and then the output from that went into the main breaker panel outside the house. 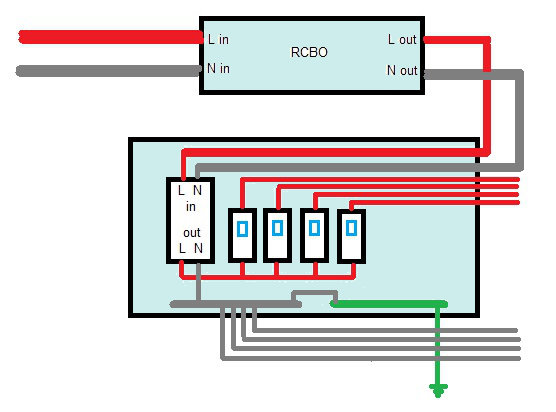 I seem to have some leakage somewhere in the house, which kept tripping the RCBO. There's another RCBO built into the subpanel inside the house and that doesn't trip, so I went back to the installation of the new RCBO. 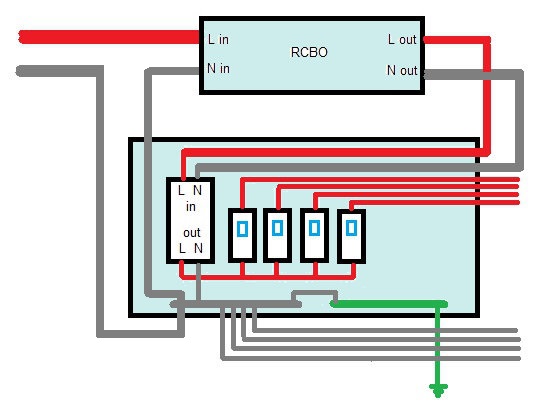 This alternative installation doesn't make sense to me, but if that's what the installation pamphlet says then I won't argue. The RCBO still trips - so that didn't solve that problem.

However, now I have a new problem. If I switch on one of the breakers, I get the normal 220V going through that breaker.

BUT NOW I'M GETTING ABOUT 2V-6V COMING FROM THE OUTPUT OF THE NEIGHBORING BREAKERS EVEN THOUGH THEY ARE OFF! Why is this happening???

(It may be that this was the case beforehand and I just didn't notice. Could ALL the breakers be faulty? Or could it be some weird wiring with the main breaker that's the cause of it - maybe connecting the cables into the wrong ends?)

A related problem is that there's 220V going to ground when one of the breakers is on. I think that's normal. But the electrician has probably connected the earth to the pole carrying the cables from the grid. It's a metal pole sticking out of the ground - and registers 220V. Is that normal? Is that safe!???

I'm tearing my hair out. And I've called in 3 electricians already, but we live in Thailand where just about anybody can call themselves an electrician. They don't seem to know much more about installations (and RCBOs) than I do (which isn't all that much).

The 2-6 volts is not leakage, it's being induced - picked up like an antenna from adjacent conductors which are hot. You're only seeing it because your DVM is very sensitive. If you put any kind of load on it, even a night light, the voltage will disappear because there's no force behind it. I've built passive AM radios that work on this principle, the airwaves itself powering a very tiny, delicate earpiece, doesn't work with heavier headphones.

RCBO, we call them GFCI in America, because they detect "ground faults". They work like this.

In the drawing, tying the RCBO's incoming AND outgoing neutral to your panel is a complete fiasco, because it gives neutral current a path around the RCBO, which utterly defeats the purpose. Here is how that will trip unnecessarily.

The smaller RCBO in your diagram is "less wrong" but still problematic, as neutral can go down the ground tie to your neighbor's ground tie, into his panel and back to the transformer that way. Assuming you share a transformer. And even worse, the ground bus is tied to the neutral output of the RCBO, which means the RCBO can't see actual ground faults.

You should have TWO neutrals - the rough-and-tumble base neutral prior to the RCBO, and the protected neutral after the RCBO, which serves the exact same circuits as the RCBO hots with no exceptions. IE something like this. (note that chaining RCBOs like this is purposeless and I assume you're doing it because of the panels you are stuck with.) I shaded the protected area blue, note the ground is outside of it!

And of course, the safety ground is also run to every outlet - that is the third wire. The safety ground must be tied to neutral before the RCBO - if it is tied downstream of an RCBO, then the RCBO won't be aware of ground faults. Fault current must bypass the RBCO.

This thing looks odd, because we're mixing European and American paradigms... Thailand. Having a whole-house RBCO is a European concept. In America you use individual GFCI breakers on certain circuits and not others - as a result, a trip will not plunge you into darkness or leave you a fridge full of spoiled food.

And lastly, I suspect you have a ground fault somewhere in the house - perhaps that's why you hooked up the RCBOs wrong (in the drawing) - because if you hook them up right, they trip. Well, they're supposed to trip.

Seeing 220V on your ground line is not right, unless you are measuring improperly somehow. That indicates a condition that the breaker or RCBO should be tripping on.

2-6 volts into a high inductance meter may just be inductive hum picked up from nearby wires. Unless it can sustain considerable amperage, I wouldn't worry about it.

Okay, I think I've figured it out now. I was ignorant about the purpose of the neutral part of the circuit and how it relates to ground. Please correct me if I'm wrong:

The neutral line is the same as ground, but connected way down at the transformer. The live line is what provides the voltage "push".

So I should get the full 220V (what's left of the original 240V after resistance in the cable) between live and anything that is properly grounded.

The fact that I'm getting 100V between live and the ungrounded metal chassis via the screw in the wall means that there's still 120V of "push" left that can flow through some other grounded object (or person).

I know this isn't a scientifically-correct explanation, but I think a bear with little brain like me can undererstand it. If I've misunderstood it then please advise! :) Thanks.

PS Now the next part of my project is to figure out how to test/measure for leakage in the various circuits.... I suspect that there must still be leakage somewhere, especially as some of the cables are underground (which gets soaked when it rains) and the wire insulations aren't all necessarily waterproof I don't think.

Not the answer you're looking for? Browse other questions tagged electrical grounding breaker-box or ask your own question.

0
Dangers of bootleg ground and GFCI?

9
Is some asymmetry in a breaker box normal? What about neutral to ground having voltage?
5
What is wrong with this panel wiring?
0
Subpanel installation breaker size: is it big enough?
0
How to run ground, for electric supplied by generator and batteries through a inverter
2
RCBO makes one lamp blink
3
Move grounds to subpanel when I moved 8 single pole breakers to same subpanel?
2
Updating sub panel in shed
2
Subpanel Vs. 220v-240v NEMA 14-50
0
Why did my generator trip the feed breaker in the subpanel?
0
Ground wire in subpanel