How do I realign copper water pipes after cutting?

I cut a 1/2" copper pipe to insert a tee fitting a which will eventually go to a Pex line for an outdoor tap. The copper pipe was vertical, and when I completed the cut I found that the pipe was actually under tension. The top half of the pipe moved, and now the pipes are not exactly in a straight line. I can still position the two halves in a fitting, but each pipe wants to force the fitting in a different direction. Let's say the bottom one is basically plumb but the top half wants to rest at about 10 degrees from vertical. I hesitate to solder it in this position. Can I still get a good seal when I have to force the pipes to work with the fitting?

I can't change either pipe -- they are close to the main shutoff valve. I also don't want to introduce a pressure drop for the whole house by replacing the section with Pex. (Really wish the house had 3/4" pipes.) I was able to patch it up with Sharkbite for now. Sharkbite is more tolerant of the pipes not being plumb than an inflexible copper fitting.

Should I try to bend the top pipe to force it to be vertically? Is there a safe way to do this copper? Or maybe I would be better off cutting the top pipe in a second place and soldering another fitting to get a better match?

The safest way to bend a copper pipe is to use a pipe bending spring. They come in sizes to fit the diameter your pipe so you'll need two - one for each type of pipe. The spring stops the pipe kinking by supplying support to the inner part of the bend.

Simply slide the spring up the pipe, bend it and then work the spring out. 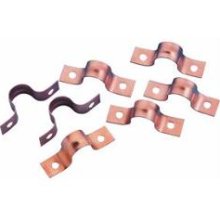 If you need to, screw/nail an extra chunk of 2x4 to the inside of the stud and then strap the copper tube to that 2x4.

Not the answer you're looking for? Browse other questions tagged plumbing pipe copper-tubing or ask your own question.

8
How do I cut and cap copper water tubing cheaply and safely?
0
How do I plumb an outside line to a roof deck faucet?
3
Is it ok to unsolder an outdoor spigot and to solder back a new one without cutting the copper pipe?
1
How were these copper pipes attached to the T&P discharge valve likely connected?
1
Installing a water filter on a sink with copper supply lines
0
Uneven copper bellow threading when replacing copper pipes with PEX
0
Couldnt push Sharkbite connector all the way for one pipe
0
Will a sharkbite fitting fail catastrophically?