I'm in the process of installing a new dishwasher. I uninstalled the old one tonight in anticipation of the new one arriving tomorrow. I got everything unhooked and left the electric for last. I pulled off the cover and there before me are two wires and a ground attached to the old dishwasher. I went out to the garage and popped the circuit breaker which is one half of a duplex. The other half goes to the garbage disposal. These two breakers are rated at 15A each. I went back into the house and pulled the wire nuts off of the connections. I grabbed my trusty multimeter and test the circuit and it was reading 121vac ... hmmmm ... what could be going on?? I checked the garbage disposal by flipping the wall switch and sure enough, it's dead. I thought, "No big deal, just mislabeled." I go back out to the garage and flip the (now known as the garbage disposal) circuit breaker back on and turn the dishwasher off. I go back into the house and test the circuit again. It now reads ~40vac! I'm thinking "WHAT THE HECK??" I'm really confused. I now went back out to the garage and flipped the garbage disposal back off and go in again and test the circuit. It now reads ~1.45vac.

My question is: Is this normal behavior for a duplex? Or should I consider getting it changed out?

The breaker panel was a new install with the house 12 years ago when we had it built. Here is what the panel looks like as I don't know specifics about what panel (brand) it is or the breakers. Nothing is sticking out on them as to who makes either. The breaker in question is at position 27 with both breakers off. 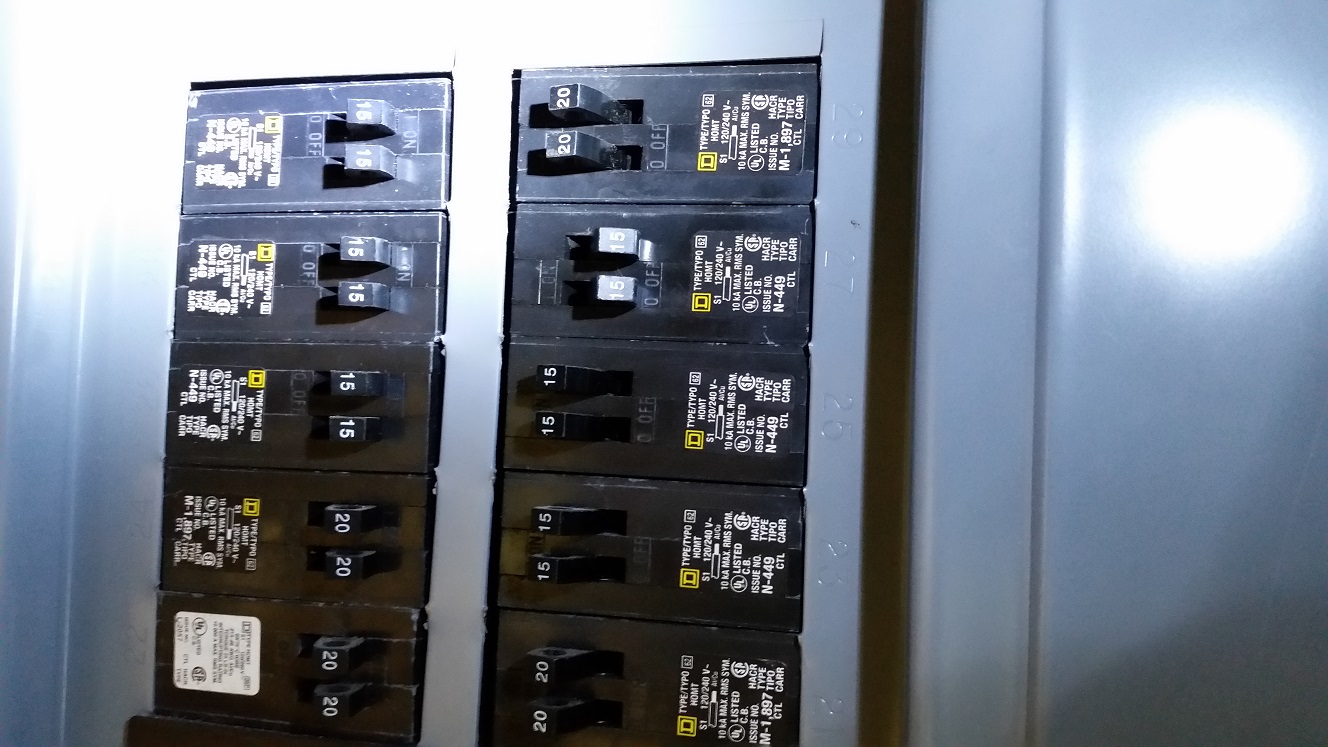 Digital Voltmeters are very high impedance and can read voltage on a circuit without loading it down. That is how they are designed.

The 40vac you are detecting on one side of the duplex breaker, with the other side turned on, is a static voltage induced on the conductor due to its proximity with another energized conductor. (This is basically how transformers work. One conductor wrapped tightly around another conductor transfers energy into the secondary conductor.) This 40 volts would disappear if you attached a load on the conductor.

This is one time when solenoid style voltmeters are superior since they load the circuit down and the static voltage disappears since it doesn't have enough power to actuate the solenoid.

The 1.45vac detected when they are both turned off is the same effect only very much diminished. Voltage induced by energized conductors nearby.

If you have a solenoid style or a regular voltmeter instead of a DMM then use that to take your readings.

I believe you've accidentally discovered a pressing and immediate safety problem you need to fix ASAP. You have a miswired MWBC (multi-wire branch circuit) which overloads the neutral wire.

It is very common to wire the disposal and dishwasher as an MWBC - each gets an opposing pole of "hot" and they share the neutral. Since they are opposite poles, if both loads are at max, they "cancel each other out" and the neutral handles nothing at all. Very slick. But if they're on the same pole, the neutral handles twice its capacity - danger!

As ArchonOSX points out, that residual voltage is just induced from parallel wires. The 1.45 volts is from being parallel to other wires for a short distance. The 40V indicates a much longer distance - suggesting it's an MWBC run in the same Romex.

How do I know the danger condition exists? Look at your breakers. You have a Square D "Homelite" (HOM) panel - it's the consumer-grade Square D product. You have oddball breakers and this confused your electrician. Let's start at the beginning. 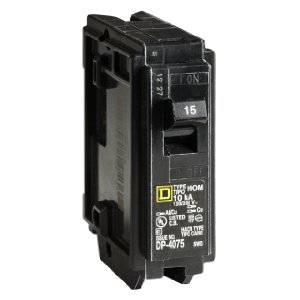 Here is what a normal 1-pole breaker looks like. Note it has 1 switch and operates 1 circuit. It is bulky and takes a lot of space. Actually it takes one space in the panel. 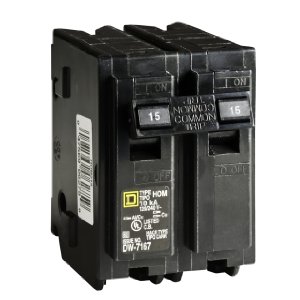 Now here's what a 2-pole breaker looks like. It's twice the width - and that's very important! As you know, USA electricity is 240V across its 2 poles, with "neutral" in the middle - 120V from pole to neutral. Panels are designed with a "zigzag" so every other space is on an opposite pole. A 2-pole breaker like this is guaranteed to be on opposite poles, so 240v across them. Works for stoves and dryers, and it's exactly what you need for an MWBC. 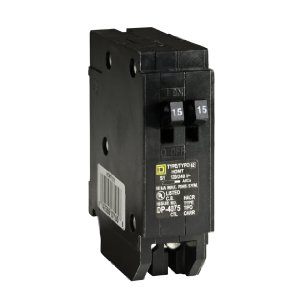 OK, but with big houses, panels fill up fast. As a workaround to that problem, they make "tandem" circuit breakers like this which cram 2 circuits into one space. You have a panel full of these. This is legit, but since it occupies one space, it only has access to one pole. Both circuits are on the same pole.

Now look at your photo, with the dishwasher and disposal turned off. They are on a tandem, both on the same pole. If they are an MWBC sharing a neutral, that's the bad thing!

How to fix this? First find out if they are an MWBC. Look and see if they share a neutral - check either in the kitchen (one hot being red and the other black is a major clue) or pull the panel cover off and see if there's a red, black, white and bare heading into the same Romex. You can also measure voltage between the dishwasher "hot" and the disposal "hot" - if the difference is 240 volts, the MWBC is wired correctly, if it's 0 volts, it is dangerous.

If it is defective, you have a bigger problem still. Your electrician may have made this mistake more than once. I would search the panel for any other mistakes, particularly with MWBCs.

To fix it, the cheap way is to simply rearrange wires so the MWBC hots are on opposite poles (breakers in adjacent spaces). The right way is to follow th National Electrical Code, which as of 2008 requires** a 2-pole breaker for MWBCs, which also assures the two hots are on opposite poles, preventing this common mistake. On a busy panel like this, how do you find the room? Like this. 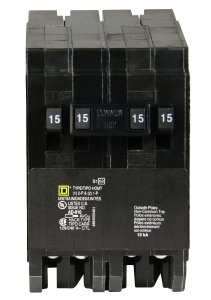 Here's the product link for that. Notice it takes 2 spaces, assuring opposite poles, and gives a tied 2-pole circuit (for your MWBC) in the center, and two single circuits on the outside (for whatever else you displaced.) Like all these breakers, you can get them in a variety of amperages to suit.

0
Why has my garbage disposal started tripping the breaker every time?
11
Why is my air conditioner tripping the circuit breaker?
3
Replace Old 200A Main Breaker with Newer Breaker
2
Is there is a Standard on how much main service panel / main circuit breaker amps should be?
1
Circuit breaker won't turn back on after being turned off (not tripped)
1
No power to outlet, single line, circuit breaker ok
0
15 Amp outlet on 20 AMP circuit?
22
subpanel breaker tripped as well as main breaker - should I be concerned?
0
Circuit Breaker tripping with "no load"