Refer to image below, I would like to know are my wall and the custom build L brackets able to hold around 50kg includes table top.

Ps: the L brackets is flat not those angle L 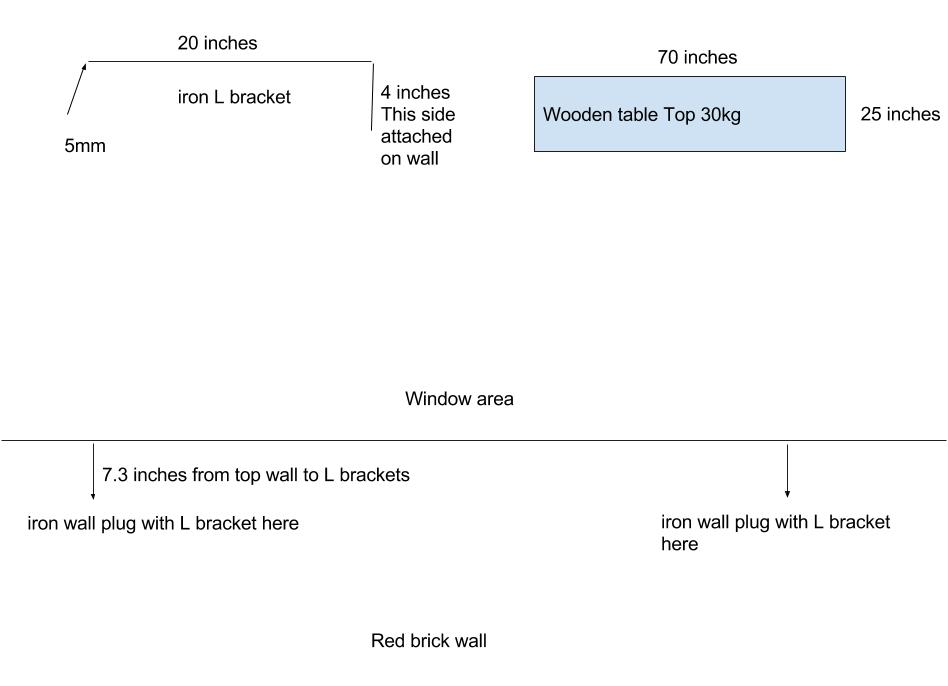 Here's a picture of where I want to install the table: 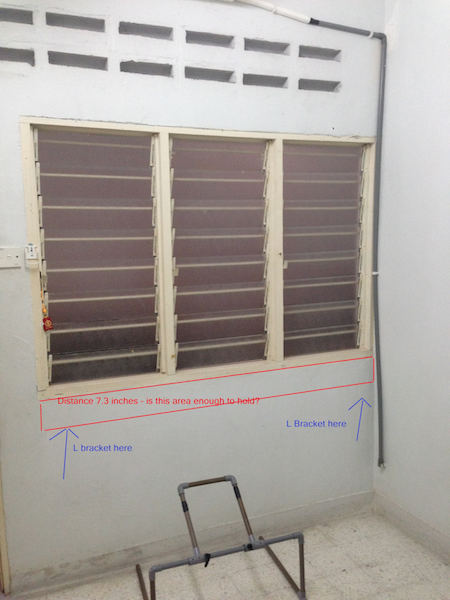 To support loads at the edge of the table, your brackets apply a torque to the wall. Let's say you're using two brackets, and 3/4 of the 50kg is on the edge of the 25" deep table (maybe it isn't, but someday someone's going to lean on it...)

The top anchor bolt in the bracket pulls out from the wall, and the bottom edge of the bracket pushes in, generating the needed torque. The brackets are 4" tall, so let's say the distance from the top bolt to the bottom edge is 3". That means the 50kg weight at the table edge will be multiplied by (25" / 3"), or about a factor of 8, meaning the brackets will be pulling on those top bolts with a force of about 400kg. Yes, there are two brackets, but that's still 200kg per bolt, pulling straight out. Even if the brackets could hold that, the bolts won't.

You need to increase the distance between that top and bottom support points. You could do this by making the bracket taller, by having the bracket extend above the table somehow, or just by hanging the front edge of the table from cables extending up to the sides of the windows. Otherwise, it may be pretty, but it will be pretty breakable as well.

Any bracket with those ratios should have a gusset added to it. If you look at any factory made longer L-brackets that long you will see they are supported by a gusset.

The reason is even if the steel you are using holds the load it will be springy out at the edge away from the wall. Hence the gusset to give it a more solid feel.

The other options is to build your brackets with angle instead of flat steel. These will have an inherent strength that flat steel doesn't.

I'd have to say put a short section of Angle Iron on the right wall & then put both of your L-brackets under the left side to have just the left float. This will provide a much more secure table & minimize tension upon the bricks.

Not the answer you're looking for? Browse other questions tagged walls table brackets or ask your own question.

0
How to make table legs from wooden planks?
1
Is 1/2“ plywood sufficient in strength as a 40”x28" table top?
0
Looking for quick attach and release options for a table top attached to a metal frame
0
10cm brick wall carrying capacity for additional beams
0
Proper way to brace a knee wall with hold downs
0
Identification of shelf brackets
0
Automatically catching mechanism for drop leaf table
6
Can I partially suspend an angled climbing wall from my garage trusses?