How do I handle the grounded neutral for a simple switch?

I trying to move a switch, which is currently in a 2-gang box. The 2-gang box will need to stay in place (and covered with a plate) as it is also the junction of some other stuff (currently power comes into the box, and feeds the switched light, and 2 branches of outlets). With new codes, I need to have a grounded neutral in the relocated switch. My plan is to do the following: 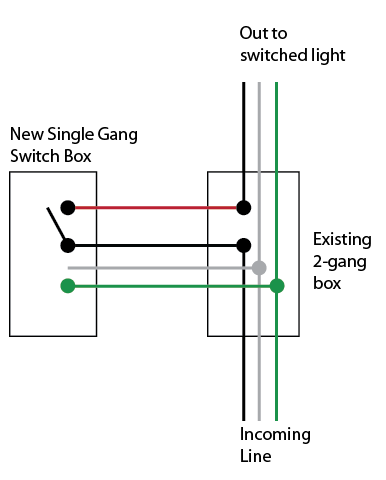 Note, I have excluded all the other stuff that is in the existing 2-gang box. My question is- what do I do with the neutral in the 1-gang switch box? My existing toggle switches do not have a connection for a neutral (they are not "smart" switches). Do I just cap the neutral line in the single-gang box? Are there new toggle switches that accept a neutral?

Simply cap it with a twist-on wire connector, or other approved method.

Not the answer you're looking for? Browse other questions tagged electrical switch code-compliance or ask your own question.

3
How do I fish a wire into an existing electrical box?
4
Is a grounded (neutral) conductor required at a switch location that controls a switched receptacle used for lighting?
0
How can I add a second light switch to a 3 gang box with 3 switches in it?
3
How to connect a neutral wire to a bundle?
8
How should ground wires be handled when updating switch loops in an older home?
0
How can I provide neutral wires for my smart switches?
2
Help with replacing 3 way switch with a smart 3 way switch
1
Is my plan to add a neutral wire to a switch box ok?