I'm asking this here to avoid being conned by "professional" roofers in India who either exaggerate their estimates or send highly unskilled labourers to do the job.

This is the layout of a roof: 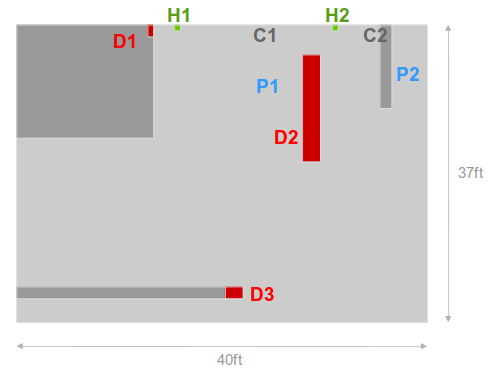 D: Areas that are damaged
H: Drainage holes
P: Ponding areas (places where water accumulates and does not flow away)
C: Small cracks that may or may not be significant for consideration

D2 was an area where a solar water heater was installed and after it was removed, one strip of the roofing got damaged and cement was applied on it (as in the pic below). It hasn't caused any leak problems for 5 years, and the area only started leaking during last year's rains. 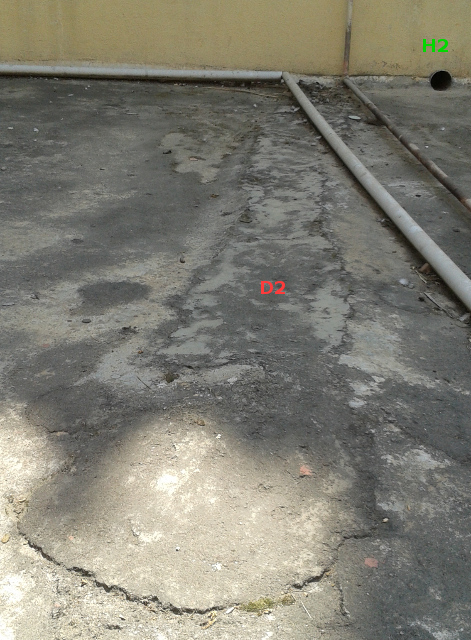 H1 and H2 are the only points for water drainage on the entire roof (I do believe the roof is slightly sloping toward H1 and H2). Because of D2 having some elevation, some of the water collecting in P1 was not able to flow to H2 (blue arrow) and was not flowing to H1 either. 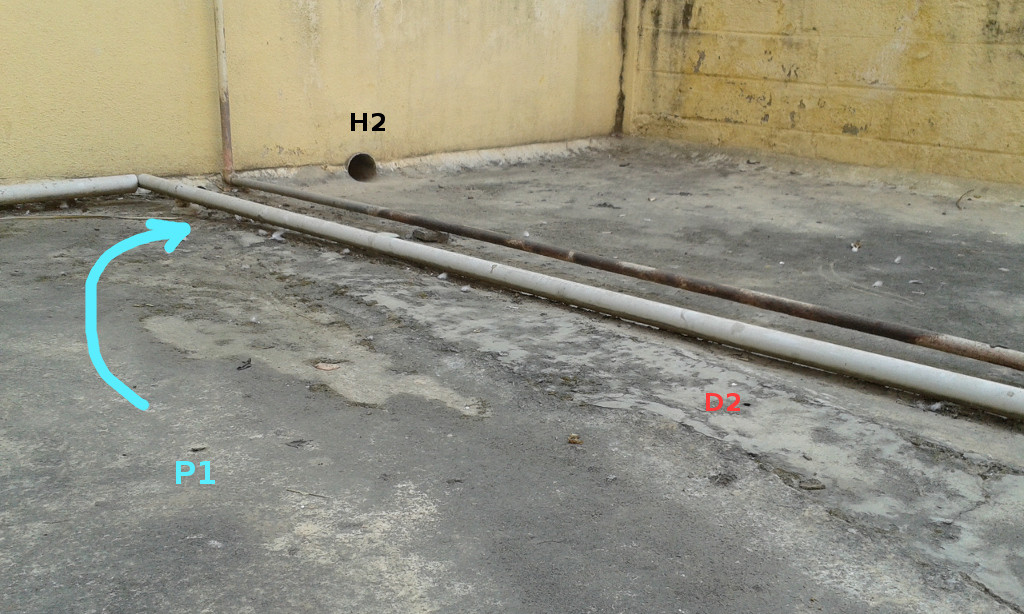 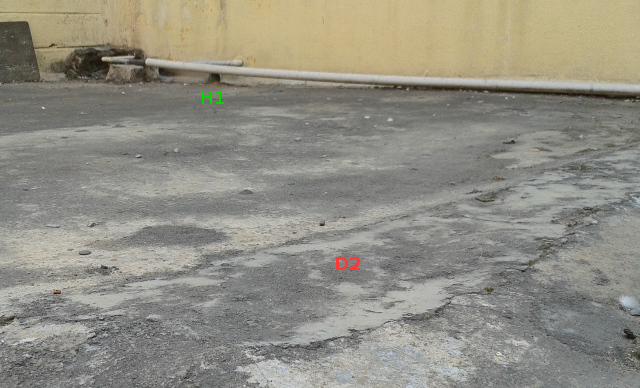 Water also collects in area P2 and there's no scope for drainage.

Other areas of damage are at D1 and D3 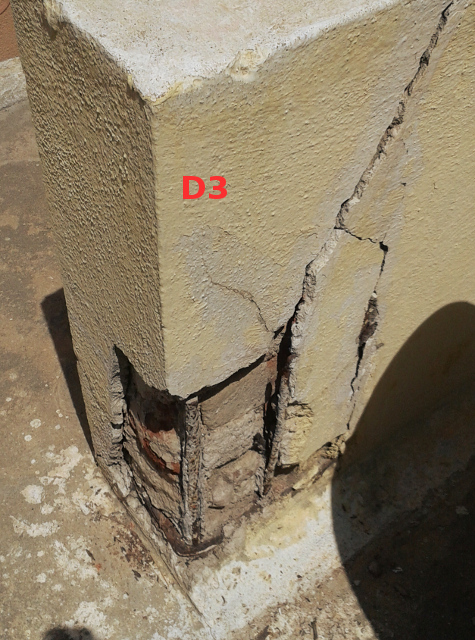 This is the dampness caused on the ceiling right below D2. There is no leakage anywhere else inside the house:

There are also some slight cracks on the plaster on the ceiling: 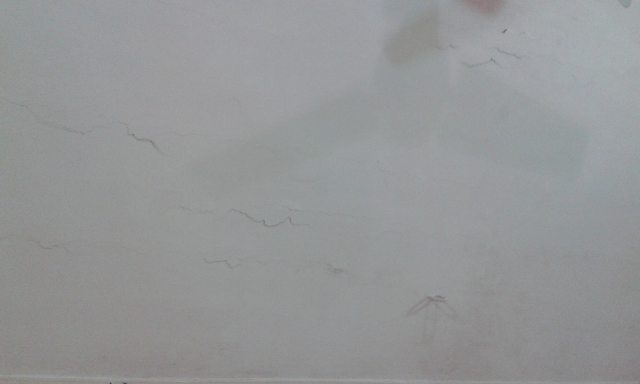 Queries:
1. Is it possible that the damages at D1 and D3 could cause water to seep into the damaged areas and eventually flow and accumulate at the D2 area, thus causing leakage inside the house?
2. A mason says that in order to waterproof D2, he'd first have to chip off some of the cement along that strip, then get some sand and cement and mix some waterproofing liquid (another mason said he'd mix a waterproofing powder) into the cement and then apply it over D2. He's offering to do it (and the repairs of D1 and D3) at less than half the price that professional roofers charge. Does his technique sound ok to you?
3. Is it ok if there is some ponding of water at P1 and P2 or should some cement be applied at least at P1, just to create a slope so that the water flows into H2 (won't that add extra weight to the roof)?
4. How does one determine whether cracks are just cracks on the plaster or whether they are deep enough to cause roof leaks? For example, the pictures below:

I mostly agree with Ed Beal. Small or hairline Cracks like C1 & C2 can be simply Caulked for a 10-plus year repair & yes you want to address all of those types of cracks whether they're on the wall or roof, so they don't become bigger cracks. You've got hundreds & ALL cracks are potential leaks.

Break-outs & fully open large splits & spalls like D1 & D3 need to be cleaned of all loose debris & forcibly filled with Hydraulic Cement, it slightly expands within & behind as it cures to make the best water-tightness & backing of the surrounding cement.

Areas like P1 that are in the field of the roof need to be leveled to each side of the low spot's high spots, pitched. Meaning, the P1 outside edge further from H1 will & must be slightly higher than P1's inner closer edge to H2. The entire roof should be shaped like 2 bath tub bottoms with H1 & H2 being the drains.

Your roof must tilt from the front to the back & must also be bellied down from the center & outside walls while always maintaining that front to back pitch in order for H1 & H2 to remove all water & have no puddling. Then, everything can be re-painted & the roof can be sealed.

Not the answer you're looking for? Browse other questions tagged roof sound-proofing roofing or ask your own question.

4
What's a good way to seal a flat concrete roof?
3
How do I properly install underlayment and a modified bitumen roof on a flat garage roof with concrete walls?
1
From metal roof to composite shingles, mold and water issues?
1
Fixing the slope of a flat roof
0
How to measure 1/4" per 1' slope for rainwater drainage for a flat roof
3
Fixing water ingress at mitred corner in roof fascia
5
How can I locate and repair a leak on a flat roof?
0
Filling depression in a Flat Roof with Sand and Roofing Rubber?