The carpet on my stairs is worn. Should I repair it or just remove it?

In our house the second floor and the stairs to them have carpet over top of old hardwood floors (installed by previous owner). The carpet is wearing out, particularly on the stairs where it has come untacked in a couple places so that when you go up or down them the carpet will at times slide forward creating a hazard we need to deal with. We can see under the carpet in a couple places and the floor looks okay, but not great.

Does it make more sense to remove the carpet and risk the condition of the floor underneath or try to tack the carpet back in place? What would be involved with retacking it down? If the finish on the original floor is in poor shape, is it a problem just to leave it alone (assuming no splinter hazards)? Finally, if we remove the carpet, what will we need to do to remove the tacks and other carpet related things from the floors?

I'd go ahead and pull it up and see what you've got. It sounds like it's in pretty poor shape so you're going to have to get rid of it either way.

Depending on how the carpet was installed you'll probably find tack strips that look something like like this:

You might also find staples -- I don't know if this is common but our installer used a staple gun in some troublesome spots. Most if not all of the staples will probably be pulled out when you rip out the carpet.

Before removing anything, take a look at the hardwood stair treads and make a preliminary decision about whether you think they're in good enough condition to leave exposed. If they're really rough and/or you want to recarpet, leave the tack strips in place and hammer in the staples.

If you do want to leave the stairs uncarpeted, you can just remove the tack strips, being careful not to damage the floor underneath. For minimal damage I'd recommend this type of prybar available at box stores for ~$14: 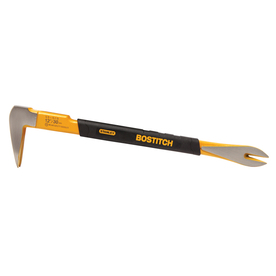 Use a hammer to tap the pointy claw end (like you would hammer a chisel) under the head of each nail holding the tack strip down, then pry up the nail enough that you can get your hammer's claw under it to pull it out. No tools ever need touch your stair tread.

I had oriental carpeting which wore along the front edge of the steps. My clever Mom told me what they used to do in the old days was to move the carpet a half step so the worn part would then be the crease on the next step down....so I did it and it worked perfectly, I still have that nice antique carpeting which I love and was cut to order, but it's not as spendy. Good ol' New England thrift!

I love hardwood floors, so I would rip the carpet out and re-finish the hardwood if it wasn't in good condition.

If it's not, you can always put new carpet down.

If the carpet is frayed, it will have to be removed anyway. You can then decide whether to put new carpet on or refinish the wood floor. Even if you end up hiring a company to sand and lacquer the floors, you can save hundreds of dollars by removing and disposing of the carpet, setting the nails, and doing any necessary repairs yourself.

We removed the carpet from the stairs and several upstairs rooms. These were pine floors, but they had been carpeted at least since 1945 (dated by the newspapers used as carpet pads). The downstairs rooms have old (some perhaps a century) and quite nice pine floors, and we were hoping for the same in the rest of the house. While we are satisfied with the result overall, there were some disappointments:

Not the answer you're looking for? Browse other questions tagged carpet stairs flooring or ask your own question.

3
Is it a good idea to put 1/4" XPS under engineered floors?
6
How can I protect my (engineered) hardwood floor from scratching?
2
Should I carpet the stairs or install hardwood flooring first?
4
Is sanding hardwood floors really necessary?
1
Methods for dampening condo floor noise?
2
Should I replace carpet over ancient linoleum that might contain asbestos?
1
How can I remove / replace this OSB floor?
1
What should I lay under carpet to protect hardwood floor for a couple of years?
0
Changing Stair Rise After Landing Replacement