Effect of changing the size of a pipe

I've had a couple questions above the sizing of a pipe, but I'm still a little confused and can't find an easy answer.

I'll use this image to get a representation of what I'm looking to have answered. 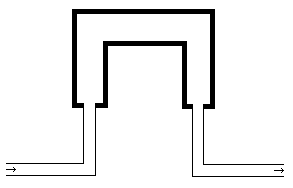 The shape doesn't have to be a U like this; I just figured it'd knock out two birds with one stone. It simply represents an increase and then a decrease. You can treat them separately in the answers or as a whole if it does matter.

You should see the same water pressure on both sides of the bigger section of pipe.

I wouldn't expect the bigger pipe to really make any pertinent difference.

The water will flow more slowly in the bigger pipe, but the pressure will increase (Bernoulli's law, the same thing that makes an airplane wing fly, but applied to fluid dynamics). The water will fill and pressurize the bigger pipe, and the greater pressure in the section of big pipe will force the water into the small pipe on the far side at the same velocity that the water entered on the near side. Again due to the phenomenon described by Bernoulli's law, faster-moving water in the smaller pipe will exert less pressure on the pipe. That isn't to say that there is less energy in the smaller section of pipe. Part of that energy is accounted for in the greater momentum of the fluid. So the water coming out the end of that pipe will be moving with as much force as the water that went into the other end.

The velocity, flow rate, and pressure will be nearly identical at the inlet and outlet of that assembly. The only difference will be energy lost while moving through the pipe, e.g. pressure drop due to resistance.

In the example you drew, the larger pipe, and the elbows on that larger pipe would mean that you would get more of the original pressure to the fitting, rather than losing it to friction in the pipe, compared to if you went with small pipe the whole way. The difference would depend on the flow rate, which is why many different sizes of pipe exist.

There is actually an additional pressure loss introduced just by changing the pipe size (and will depend on what kind of fitting you use to do that), because the water has to change directions (flowing out or in rather than straight down the pipe), so that also has to be accounted for when you decide if it's worth it to increase pipe size.

At the end, for a real world system, the losses have to be calculated to determine what is the best trade-off between cost and pressure loss.

I'd expect the pressure to Decrease as it entered the larger pipe since it can then expand into the larger volume. However, real world application would need to determine any actual effect. Since, water in motion will buffer itself when it encounters an obstacle. Like a rock in a river, water actually makes a buffer bubble behind the rock.

So, actually flowing in from 1/2" & exiting out back into 1/2" would likely show no difference than a full 1/2" bend from a 3/4" bend. But, 1" might be the limit of that buffering as the water's cavitation may actually start to fight back the flow.

Not the answer you're looking for? Browse other questions tagged plumbing water pipe or ask your own question.

2
Will 3/4“ Outside faucet get more pressure than a 1/2” one?
0
What are the effects of changing water pipe sizes?
1
Why am I getting cold water at faucets near the end of a circulation loop?

4
Does a larger solar water heater equate to better water pressure?
0
Why is my downstairs shower pressure lower than upstairs?
0
What are the effects of changing water pipe sizes?
3
Would increasing pipe size just after the meter give better flow without increasing pressure too much?
1
Will replacing my jet pump with one that has a higher shut-off pressure increase the discharge pressure?
0
Water filter setup - 1 1/4 inch pipe to 3/4
2
Can flow rate (or pressure) at the end increase if the diameter of pipe increased and then gradually reduced along the way?
0
Water pressure when changing pipe diameter
1
How can I maintain pressure when adding bends to a gas line?