We have had an intermittent problem over the last 4 months with our boiler cutting out with F22 and F25 errors (circulation fault/air in system etc...). Its a Glow worm Flexicom 18hx and has been installed for about 2 years. It would cut out every 10 minutes or so, and the way we would get it working again would be to turn off every radiator but one, and then reset the boiler multiple times (sometimes all day) until it stayed on with the one rad on. Then we would turn another radiator on, let it get hot, then another until they were all on.

It would then work flawlessly from then on for a few weeks. Then it would start over again with the errors, and we would go through the process again. Some plumbers we have had in for other things (while there were no problems) have said it sounds like the pump was on it's way out, and it did sound funky.

This weekend it started again and no matter what we did the boiler would not stay on past 5 or 10 minutes. So I went and bought a new Grundfos pump, a drop in replacement for my old one and replaced it myself. However even with this new pump, the boiler is still crapping out.

It's a vented system with a hot water tank in the airing cupboard. The system has been drained down, all radiators bled, all bleed points by the tank and pump have been bled. The temp on the boiler is set to 39C. I have also manually opened both Honeywell valves by the pump.

Nothing is working and it is killing. What else can I possibly try?

Looks like quite a few people still come across this question so I thought I would post what the problem was in the hope it may help others.

After trying everything it could possibly be, including replacing the thermistor in the boiler, in the end it was a good old British Gas engineer that fixed the issue with a couple of air release valves (automatic bleed valves) on the two bleed points in our airing cupboard. The air was getting trapped in and around the pump and valves no matter how much manual bleeding we did.

The end result is a working central heating system, and the odd short sharp hiss coming from the cupboard once and a while.

Which give a list of things to try. The manual contains diagrams that should help you identify the thermistor and other parts.

I don't know how you'd check for "System is too restrictive". If you are using 15mm to radiators (rather than say narrowbore) a partial blockage somewhere is less likely I guess. Flushing the circuit might be worth trying. You might first try rebalancing the radiators.

You could check that the layout of the plumbing conforms with the boiler manufacturers requirements: 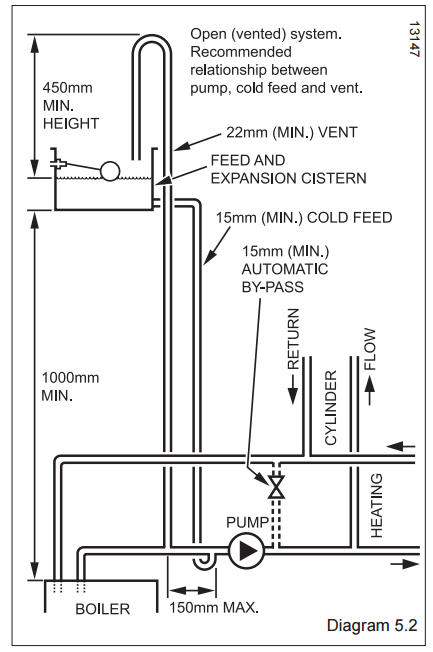 I admit I'd be looking for a suitably qualified engineer with good experience in this specific boiler model. The maker have a phone number for technical advice but I imagine they might expect to talk to a qualified engineer rather than a householder.

I had the same problem with my glow worm flexicon 12hx. It was throwing fault codes f11, f22, and f25. The house is approx 7 years old. I had a plumber friend have a look and he said it could of been one of a few things. I didn't want to spend money on numerous attempts to fix so I contacted glow worm and they put me onto a service deal for £299.88. This covered all boiler and system parts including the pump and valves but did not cover blockages. However if they didn't fix the fault I could claim the money back.

Their engineer arrived and stated it would not be a boiler fault with these codes, as they indicate circulation issues. He then:

He then thought it was a flow valve at top of the airing cupboard. He said most systems don't have this, they have a simple H pipework instead. Just to make sure, he changed the pump. He said old pump was working but maybe was not as efficient as it should be but this was not the fault.

He thought it was a blockage in the valve and said this was not covered and I should get my plumber friend to remove the valve and put H pipework in and this would solve issue. I was not convinced.

He said the boiler is working because it was showing 72° so it was hot. But when he felt boiler he realised it wasn't hot. He went to his van and came back, then changed a thermistor in the boiler, which took 2 minutes.

This fixed the fault immediately and it has been fixed since. This was one of the things my mate said it was likely to be. We thought we would have to remove a lot of parts to get to it. The engineer did it by clipping the original one, sliding it across and leaving it there, then putting the new one in.

This is worth a try for you all. For us we just needed it fixed immediately as it was unlivable with a baby in the house.

Not the answer you're looking for? Browse other questions tagged plumbing heating boiler central-heating or ask your own question.

2
What would cause the bottom half of a radiator cool down after heating up?
3
What should I do about this Alpha HE CB33 Boiler pressure error condition?
0
Why is my Central Heating taking so long to heat up?
2
Risk of leakage when changing open-vented to sealed-system boiler
0
Repressurising Logic Combi 24 boiler
1
Central heating header tank over flow
1
Central heating system / boiler does not shut off
0
Glow Worm Flexicom HX boiler F11, F22, F25 Error codes