Would it hurt my water pump if installed a second water pump on the output of the first?

I have a well in my garden(17m deep, 1m diameter), in it there is a platform on which my water pump for my house sits. Before the water comes out my faucet or shower it travels across some 20 to 30 meters of small diameter pipe. So the water pressure at the end is miserable.

Can I connect another water pump right before(4m of pipe away) my shower, so that this pump would suck water from the first pump, create pressure and deliver comfortable pressure of water to my shower?

Of course, I need some place for the second pump, it would create some noise, but would that be ok or would the first water pump get damaged?

If the problem is undersized pipe, you need larger pipe, or some other coping mechanism such as a large pressure tank at the house.

Placing a pump on the end of the small pipe will likely cause the second pump to cavitate, which generally damages the pump. Water can only be sucked so hard before it boils, at any temperature.

If you want a pump on the house side, you can do that, but you'd need to provide a large cistern to serve as the water source for that pump, so it's drawing from the stored water in the cistern, not the too-small pipe.

A larger pipe is a much simpler solution to this problem in most cases.

Installing another pump after the primary pump may damage the primary pump, but even if it doesn't it won't solve your problem. The bigger issue is that if the line between the two pumps has any leaks, even microscopic, then you'll be creating a very low pressure in that pipe, which may lead to contamination. You would have to make sure the secondary pump is lower pressure, and this would defeat any possible benefit anyway.

Consider installing a low flow shower head. These are designed for a lower volume of water, and if you can reduce the volume requirements, the apparent pressure will go up. It will provide for a more powerful shower, without having to increase the actual volume or pressure of the existing system.

Beyond that, the only way to get more volume through an existing pipe is to increase the pressure. I don't suggest that you pursue this, though, as you may create or enlarge leaks in the piping you don't want to replace.

As others have indicated, the next step is either replacing the pipe, or adding storage closer to the use.

Keep in mind that even an old high flow shower requires less than 10 gallons of water per ten minutes of showering, and during that time your source would be able to fill the storage, though not as fast as you're using it. So even a tiny 5 gallon pressure tank might give you a full pressure 10 minute shower, using 10 gallons before it goes back to the original pump volume/pressure limitations.

Add in a low flow shower head, and you could use a 5 gallon tank for 40-60 minutes before experiencing reduced pressure.

Placing it in the attic isn't difficult - these 5-10 gallon tanks are small, and even when full of water less than the weight of an adult. Adding a box around one with adequate insulation, and removing the insulation below it so it's more exposed to the heat from the living area shouldn't incur excessive costs.

It may be tempting to get a larger tank, but for this one problem it's probably not necessary.

In theory, there should be no problem installing multiple pumps in series. However, to do so, the pumps must both have the same flow rate. If the pumps are matched, then the head pressure should be additive. In practice, it might be more complex than it sounds.

The common solution to this problem, is to install a pressure tank. While this might seem like an expensive solution, it may actually not be so bad. If you were considering installing multiple small pumps throughout the home, you might find that a single pressure tank isn't far off price wise. If you are considering installing a pump matched to the well pump, you still might find that the pressure tank option is cheaper. This is especially true, if you consider the electrical requirements of the second pump.

Something like the below will theoretically work, but will require three pumps and some new plumbing. 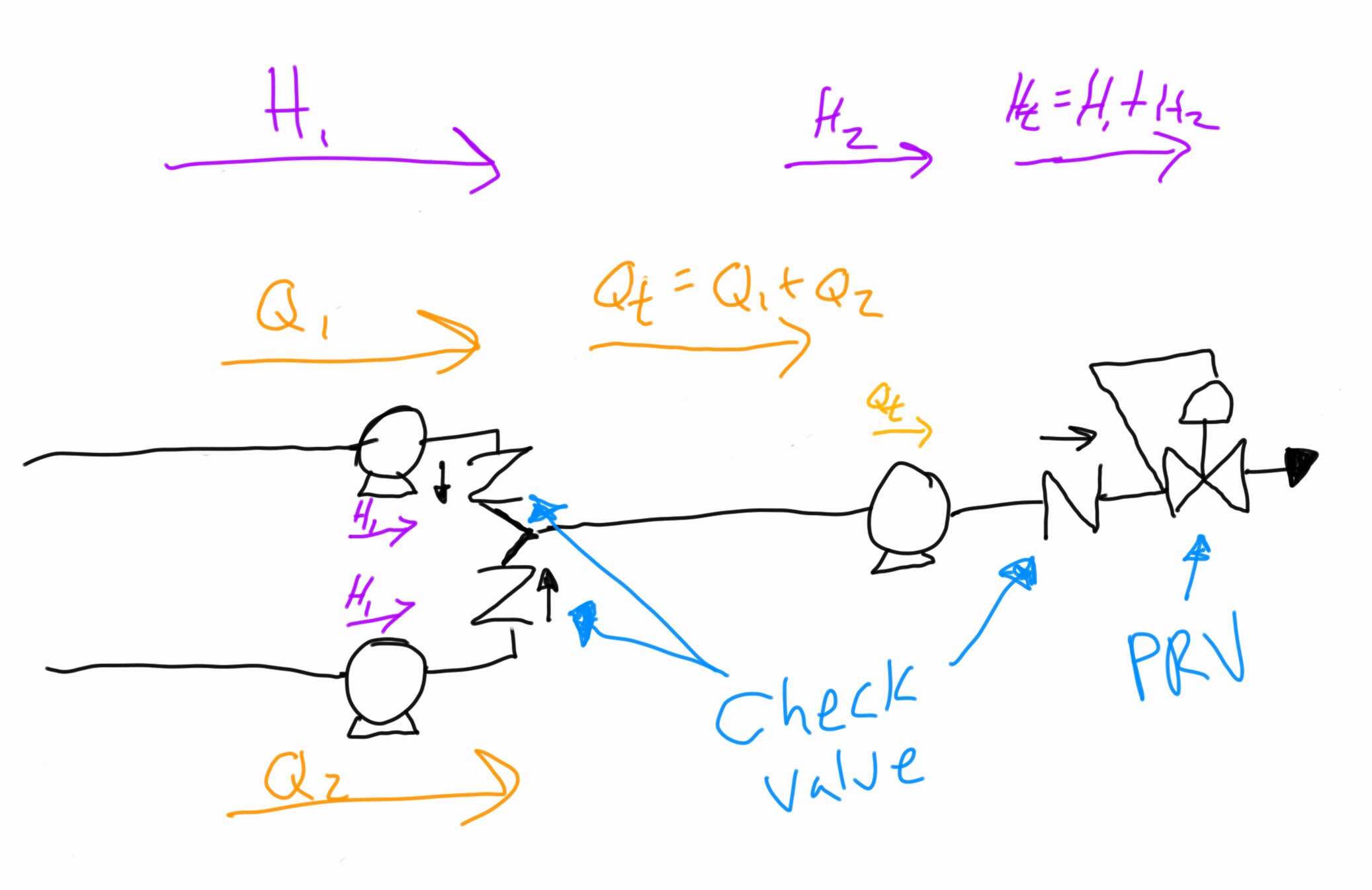 Yes, it would damage your well pump since it would drain the pump line & cause overheating of the well pump & you'd quickly run out of water until the well pump catches up for just another short burst of water & now air. I don't know your well system's setup of course, but you would need a cistern or much larger cistern in order to successfully run a 2nd pump.

If this inadequacy has been only fairly recent & the pressure has been dropping or stepping down, then it's time for a new well pump as your pump is wearing out. Replacing the pump either way would be your quickest, best & least expensive solution for many years of enjoyment.

Why must it be a pressure tank?

Why not install a larger break tank with the new pump on the output delivering all the pressure you need? I install such systems all the time and all you have to do is ensure the tank is of sufficient capacity to deliver the qty of water per time period.

Bear in mind however that its makeup rate will be quite slow due to the poor from from the well. You can install a float switch which disables the outflow from this tank if the level drops too low. If you dedicate it to just your shower then you can have a pump that flattens you against the wall.

Installing a pressure tank is your only sensible answer. This will give you better control of the entire house pressure and help extend the life of your pump. You are using a Jet pump which is not the best type anyway and as you have said is prone to failing. These pumps will run comfortably for long periods, but constant starting as yours is doing will kill them. With a pressure tank the pump may run for 10-12 minutes to fill it but then won't be used again till the tank is nearly empty. Cost of a 30 -40 gallon tank and pressure switch is very close to cost of an average jet pump

Not the answer you're looking for? Browse other questions tagged water water-pressure or ask your own question.

2
Why would I run out of water for a few seconds and then get full pressure back
0
Can I have two pressure tanks on my system?
1
Water pump and pipe size for maximum water intake?
0
Drain to a reservior when water height is higher then the drainage
0
Strange water pressure
2
How can I test and increase the water pressure in my apartment?
1
Can a tankless water heater outlet pressure be increased without a second heater?
1
Very low water pressure in the 2nd floor shower but good pressure every where else
1
Air in Water Lines - Jet Pump System