Is there a freezing-water-resistant metal pipe?

I want to install a water outlet on the outside of my house for gardening etc. Outside temperatures here in Latvia fall to -25°C sometimes, so I cannot use a common water pipe; it would burst when the water freezes. Is there a formula to tell how thick the pipe wall must be compared to the water volume inside the pipe, so that the pipe would withstand the force of frozen water expanding. Are there water taps that are strong enough?

Are there other solutions that do not require heating?

A common device used in the US (and required by some building codes) is a water outlet that is long so that turning off the water allows the portion exposed to the elements to dry out. These are called "Frost-free" or "freeze proof", etc.: 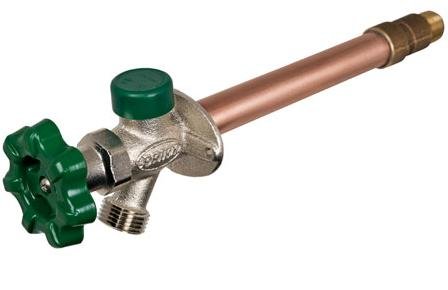 They come in different lengths, and the actual valve is all the way to the right of this picture where the copper meets the brass. This causes the entire valve to drain so no water is exposed to outside temperatures. The actual water pipes will be well inside the wall of the home and will generally not be exposed to freezing temperatures.

Here is another diagram to help explain from this answer: 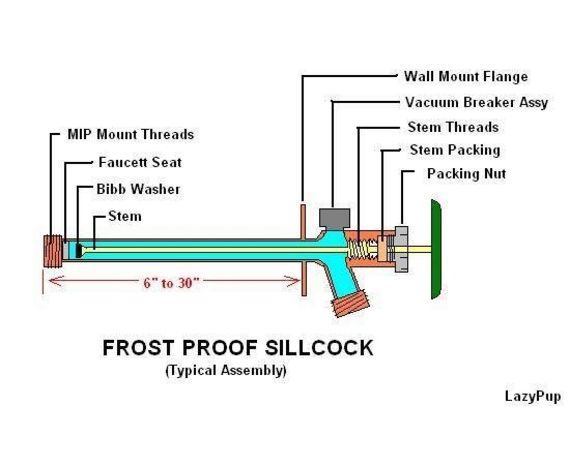 Freezing water can generate pressures scientists have only recently been able to experimentally verify. For more practical examples:

So exactly how much force is the ice capable of exerting? Well, people have been trying to work this out for a long time. In 1784 and 1785, one Major Edward Williams took advantage of the weather in Quebec and repeatedly tried and failed to find a method of containing ice. Williams at first tried to seal water inside of artillery shells, the cast iron plugs of which were launched 475 feet at an astonishing 20 feet per second when the pressure become too great. Unperturbed, Williams then took to anchoring the plugs in place using hooks, only for the shells to split in two.

In another experiment, an attempt was made to fill cannons made of one inch thick cast iron with water only for them too to split when it was frozen. Academics in Florence later tried to fill a ball made of one inch thick brass with water only for that too to crack when it was frozen. They later worked out that the force required to do so clocked in at around 27,720 pounds.

For a more exact answer, you need to once again go back the the water phase diagram, which shows that ice will turn into Ice II when the pressure reaches 300 Mega Pascals, which is exactly, 43,511.31 pounds of force per square inch. In other words, that's the amount of pressure a container would need to be able to survive to stop water turning into regular ice, instead causing it to turn into Ice II.

The answer to a freeze resistant plumbing system is actually the opposite: make the pipes thin and ductile enough that they expand with the pipe. New, well manufacturered copper can often freeze a few times before splitting.

The problem with this is that each time the copper expands, it becomes more brittle. Metal workers know that as you stretch, compress, or otherwise work copper and most other metals they develop internal stresses which cause them to be more brittle. The process of annealing can reduce or eliminate these stresses, restoring the metal's ductility.

So a copper pipe can often withstand a few freeze/thaw cycles. The joints are much less forgiving, though, and a lot of frozen pipe failures occur at or near joints where stresses cannot as easily distribute.

Thus the short answer to your question is that there is no practical size of pipe that will withstand frozen water.

There are a multitude of methods to handle this, though, the most common is the freezeproof faucet or hydrant.

Fist gotcha is that nothing is actually freeze proof only freeze resistant (you were right to word your question that way) up to a certain point. Heating units are about as 'proof' as you can get, until of course they fail for whatever reason, and of course they have their own other drawbacks.

That said, assuming you want or need the bib to be located closer to the garden, what you may need is a Yard Hydrant. These will drain the water in the pipe down below the freezing line in the ground. You'll have to run a pipe to below the frost line, which varies on depth based on several factors such as temp and type of soil. Talk to local builders or city officials to find out what the frost line in your area is. 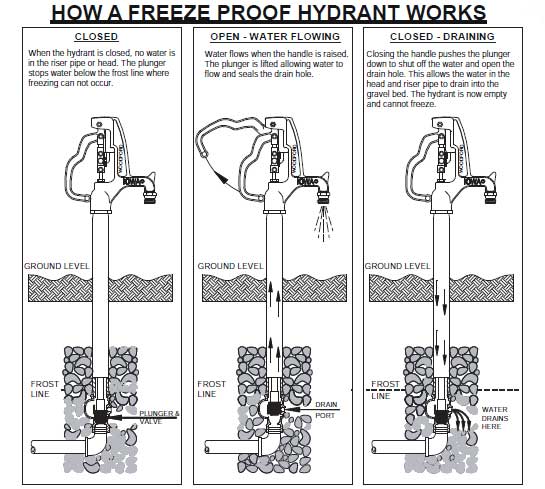 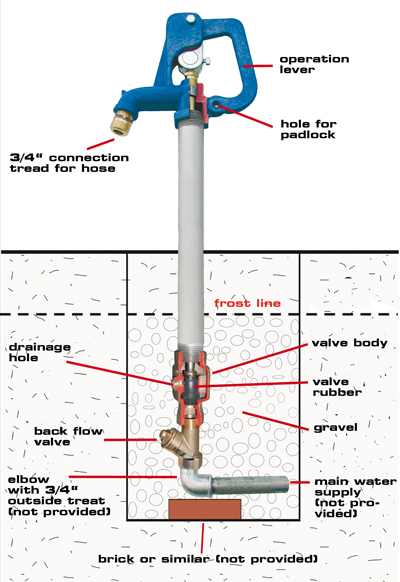 (The actual hydrants have much longer standpipes.)

These hydrants are great but they are expensive starting around $120 USD and up. Most installation instructions forget about telling you to put some kind of stone or block under the elbow fitting at the end of the pipe in order to support it better. You should also put some drain rock below and around it and I recommend some landscape fabric surrounding the drain rock.

For more information on what and where the 'Frost Line' is: nsidc.org

I wish I could post more links but my reputation isn't high enough. ... a little help here ;)

The freeze proof bibs above work on the wall of a house. If you want the faucet further from the house this hydrant style works great. The supply line is buried below the freeze level and the base of the unit is bedded in rock when you turn it off the water drains into the rock. We have 3 of these for our horses and they have never frozen. I plan on replacing our other 3 standard bibs this summer as they always freeze and break the valve.

Ironically enough, the most resistant metal water pipe is the original - lead! It's ductile enough that when the pipe contents expand during freezing, the pipe stretches outwards without breaking. Of course there is a limit to how much it can manage this before the metal gets fatigued, the walls get thinner, and things start to leak, but it's probably the most resilient option.

The downside of lead is pretty obvious though - poisoning! So I wouldn't advise using it. :) Still, if you're asking about plumbing, it's worth remembering that the word "plumbing" comes from "plumbum" which is the Latin word for lead, and this is just one of the reasons why it was used.

No piping nor material is "freeze-proof" when full of water & in your application it shouldn't be tested. But, I agree with JPhi1618 get a Freeze Proof Sillcock to accomplish your project. 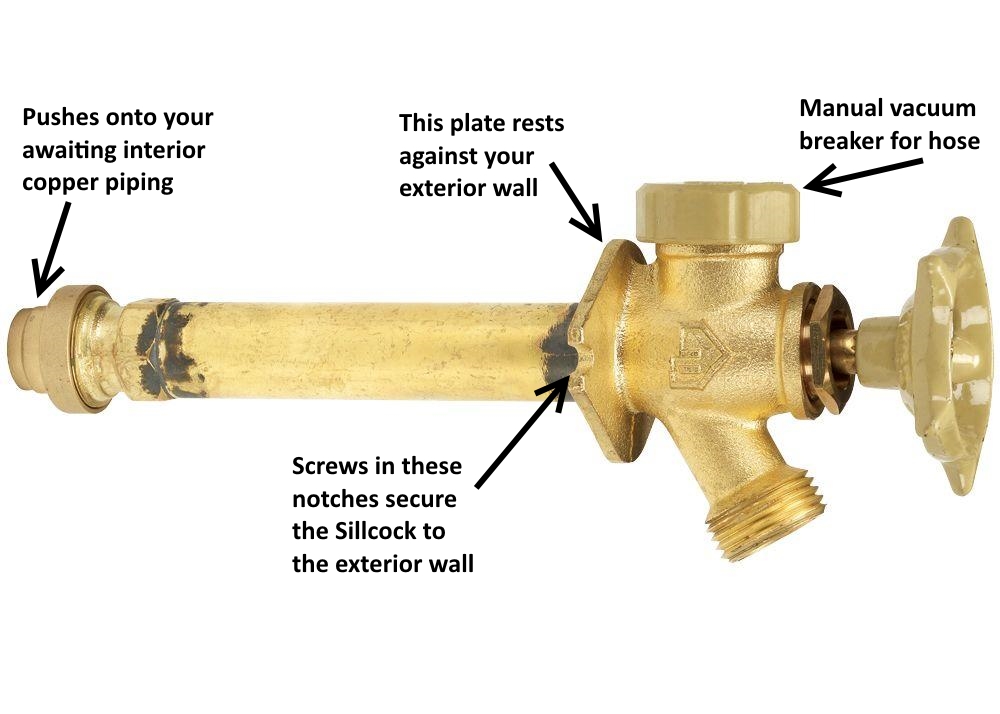 Here are a few tips to using them optimally:

In frost resistant sillcocks the valve can still freeze depending on the inside/outside temperature, and depth of the valve. The traditional method of doing it is using a stop and waste valve further back, which requires closing/draining before freezing temperatures, and opening it after: https://diy.stackexchange.com/a/38208

In houses I've looked at the stop and waste valve had been as much as 3 meters in.

At -25°C outside consider doing both, especially if in the future the heat may be turned down. I couldn't find a formulas for depth; try to look in your neigbour's houses to see what they did and if it works for them.

I wouldn't blame you if you chose to just run a hose indoors during the summer to keep things simple! In your shoes this is the solution I'd prefer. I remember from childhood a garden hose attached to the kitchen facet, exiting through the window above the sink. The facet had threads so a garden hose could be attached, and there was a PVC fork on the facet so water could still be drawn in the sink.

Insert a small compressible sealed tube inside of supply pipe. When the water freezes the expanding water should compress the flexible inner tube keeping the pressure at safe levels. As I understand it the expansion of h2 o happens just before freezing so so pressure should be evenly dispersed by hydrolic printable. For your information it would be my guess that the inner (compresable) tube should be able to absorbe 5% by vol. of the supply pipe volume. Seams so simple I must be missing something.

The force of water freezing in 114,000 psi-(PER GOOGLE). That being said, you can use a number of previously mentioned devices... another way is to "minimize' the damage when it happens. One method is the use of simple freeze plugs and/or a ball valve with a freeze plug incorporated in it.

14
How effective are outdoor foam faucet covers to prevent freezing?
6
How can I install a frost-free outdoor faucet with very little space?