I had a new water heater installed by a local plumber. He installed my tank but did not fill it with water before lighting pilot/turning to hot. He left before thoroughly verifying I had hot water!

It was 20-30 min before we discovered the problem and I filled heater with water. A neighbor helped me fix - he replaced - the T-P valve which leaked after filling tank with water. Is this tank most likely ruined?

Inside of a gas water heater there is a plate on the bottom and a flue tube for the flames / hot gasses to run up and heat the water. By having the flame on with no water, all that happened was that the plate and flue tube get very hot, likely red hot. It's highly unlikely they were damaged permanently though, there are safety cutoffs that would have turned off the gas way before that happens. 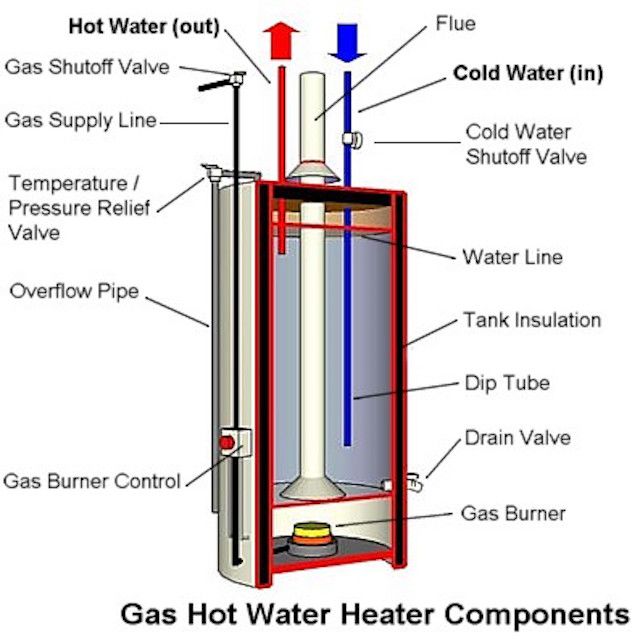 As to the T-P valve, when you finally turned on the hot water, it likely immediately flashed into steam. A hot water heater tank is NOT a steam vessel, hence the T-P valve. the T-P valve is SUPPOSED to open and vent the steam, so it was actually doing exactly what it was designed for. Once it had cooled down it would have probably re-sealed, but changing it out is not a problem. It's doubtful that Sears would pay for it without having first given it a chance to cool and seal though.

Dents on the outside of a hot water heater would be strictly cosmetic. The dent you can see is just on the "skin" of sheet metal that is covering the insulation inside, between the actual tank and that cosmetic skin. I usually buy the dented ones to get the discount.

Don't call that plumber again though, that was a bonehead move on his part...

It sounds like you got one of "their" independent contractor's that "helps them" get rid of old &/or damaged inventory. But, as long as it's working you don't have any additional basis for concern nor warranty claim yet & of course it's hopefully just a scratch & dent at this point.

While I understand the need for hot water, the water not being turned on should've been reported & assessed by Sears. And, the T&P valve replacement should've been corrected by Sears, you shouldn't touch anything regardless of how simple & quick it is. I would make a note to never mention the T&P valve if you do file a claim in the future, that'll be Sears' out.

Concerning the pilot & I might be wrong on this, but you shouldn't have a pilot & installing an Old Law Water Heater after last year's Law Change is illegal. You can call any actual Plumbing guy or firm to confirm this, if you're contemplating additional stress & interruption.

0
Hot Water Tank limit switch tripping, but not over heating?
2
Electric Hot Water Heater-Draining or Not after 8 months of non-use
1
Tankless water heater - not consistent hot water output
1
tankless water heater before the reg hot water
0
Do I need separate expansion tanks for my boiler and hot water heater?
1
Gas hot water tank leaking - water turned off, what about gas? Repair or replace?
0
Flushed water heater yesterday got a lot of sputtering right after that and today hot water is not flowing with the same pressure as before
0
Plumber wants to replace PRV valve into house at same time he is replacing hot water heater