How can I repair the end of joists sitting in brick pockets?

I have 2x8 joists over an 8 foot span that were eaten by termites on one end. I need to repair all of the joists in a small room. The building is double wythe structural brick that is approximately 100 years old. My current plan is to cut the affected ends of the joists off, attach a ledger board to the brick face using sleeve anchors, then use joist hangers to put in new ends and sister the old joists and new joists together. Does this sound like a good plan? How deep do the sleeve anchors need to be in? How much should the old and new joist overlap and what is the best way to secure them together?

Presuming this is the area from How two install hardwood floors in a long room with a subfloor that has a plane change in the middle? It really should be rot from being unprotected against the moist brick, which looks the same as termite damage...unless you found dead or live termites of course. Future instances can be avoided with just a Zip-lock type freezer bag over the beam's end.

But, No on the anchor idea, just not strong nor uniform enough. And No, on the iLikeDirt idea, it separates the floor from the structure. If you can't just shim them & leave sleeping dogs lie. Then, get a carpenter to get their thoughts on threat level of leaving them & what's proper &/or legal in your area for a repair.

Now, if you're lucky see if you have slots instead of pockets, this you can work with to get new beams in. Meaning, can you see the full pocket & a subfloor gap or does the subfloor seem to go into the brick? 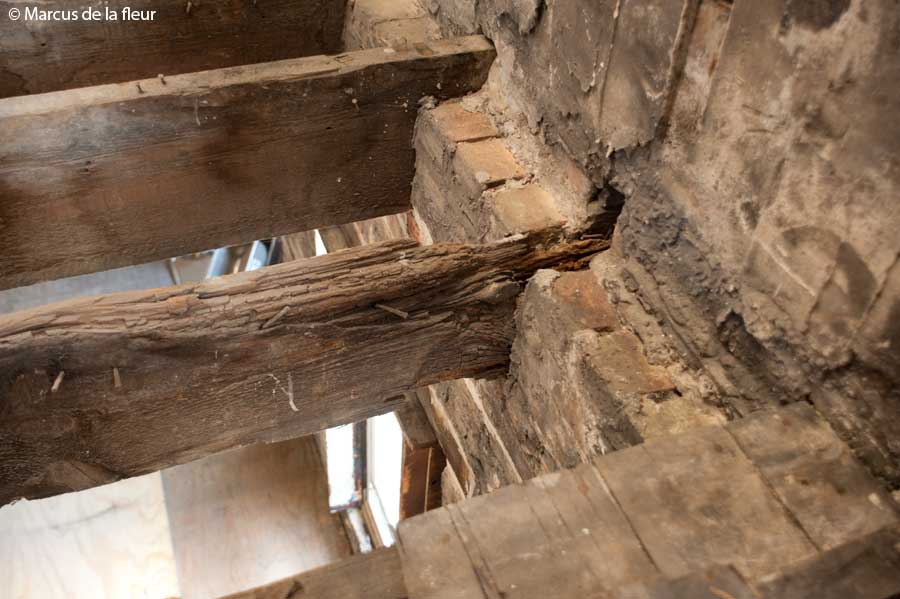 If no, then one very successful (& proper & legal around me) method is to put or leave full depth scabs in the pockets. 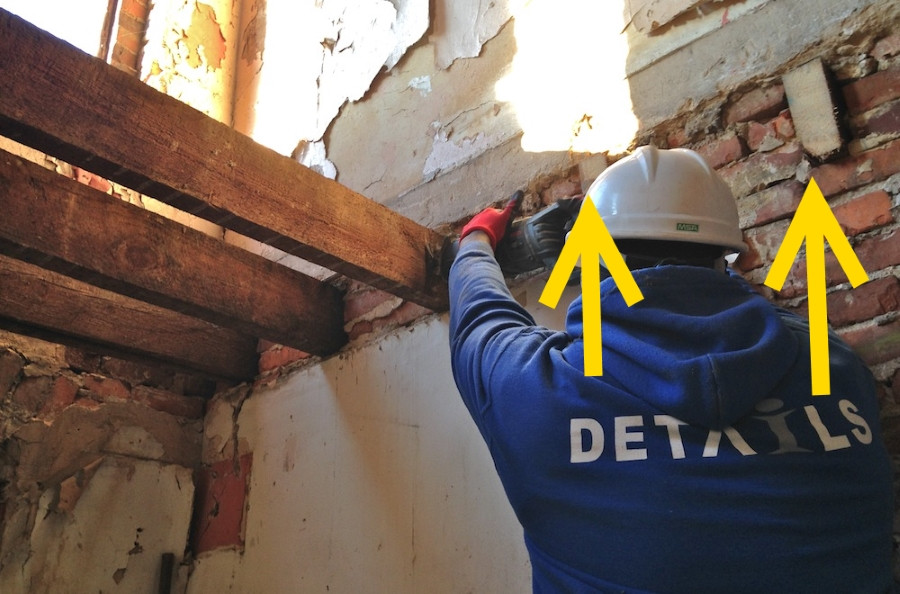 And, those get end-lagged into & through your new ledger, which is actually a whole new floor frame. 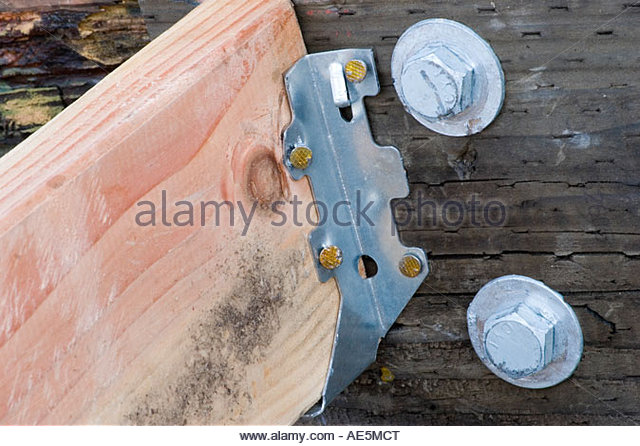 Just to kind of give you another view of the practice of framing in a new floor structure with old &/or new lumber. It looks something like this with the scabs being on the backside of the ledger or the light wood (it's a bad & wrong picture, but the best basic visual I could find). 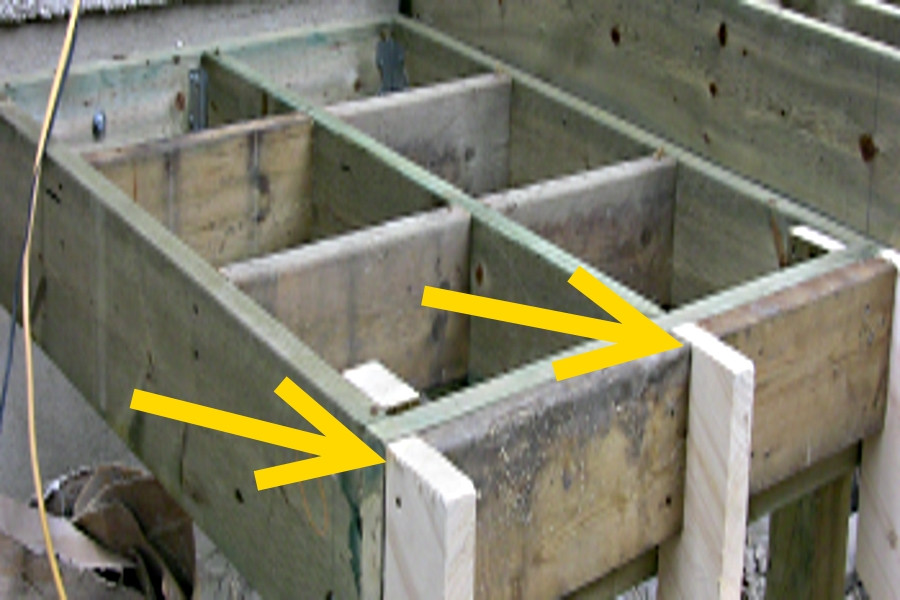 You would supplement the lags with upside down joist hangers on top of the scabs, since lags don't have the full shear resistance of a 2x8. Again, just for your visual understanding if the carpenter starts explaining what he'd do & it happens to sound like this. Or, see what he thinks of this, him falling down laughing would be explanation enough.

The benefits of the above method is that nothing changes, the pockets keep doing what they've done, the structure remains braced, no damage is done to any brick in trying to coax new beams in that may be too long & outwardly stress the structure & the new ledgers & joists can be custom heighted. But, hopefully the carpenter's just fine with leaving them in.

Your approach does not seem safe or sane. Since this is a structural problem, if I were you, I would consult a structural engineer and not make a DIY job out of it. Consequences for doing this sort of job incorrectly include the collapse of the building and potential death of yourself or anyone else in it or in the vicinity.

The general approach for this sort of thing is to fasten a new load-bearing wall or column to the joist and chop off the rotten part at the brick face with a chainsaw. Needless to say, the details are heavily dependent on site conditions.

TL;DR: Install new joists without removing the old ones, fastened the exact same way the old ones are : No ledger board and no sleeve anchors. Pocketed into the brick.

You make new pockets for sisters, and you keep the sisters as large as possible while still being able to squeeze them in there. If you have a center beam to support the other side, insert the sister in sideways and then 'flip it up' with a 5 pound sledge and a block of wood. Then tap it into the pocket from the other end.

If the other end is going to be joist-hung, cut a slight angle* on it, so that once one end is inserted into the pocket, the other will slide right into place.

Then use 1\4" structural wood screws to attach the sisters to the existing joists and then mortar what's left of the pocket (with the appropriate material), having removed as much lose debris as possible.

*An angle so slight, you might get away with just easing the top edge by whacking it with a hammer. Then pound that sucker home, once it's in there at all. Just make sure it would fit in that space in the first place, and that the angle (of insertion) is what's giving you trouble. You might also need to do something similar for the 'flip it up' end, which is easily shimmed once in place, so no worries.

P.S. - Fix your roof, do some tuck pointing and check your gutters. You either have water infiltration or drainage issues (you need a better sump). If this is below grade, you might want to look at having your foundation sealed (on the outside! $$$).

Not the answer you're looking for? Browse other questions tagged brick joists or ask your own question.

6
How to improve wooden joists without removing them
0
How two install hardwood floors in a long room with a subfloor that has a plane change in the middle?
1
Old brick foundation walls, 125 years, need repointing and/or plaster finish. What is best method and materials to resurface these old bricks?

1
What can I do about joist framing in brick pockets that is uneven and loose?
0
Different joist spacing of extended deck
0
How to properly double on ceiling joists
0
How to Pocket joist into double Wythe solid Brick wall?
1
Should I reinforce these joists at the central beam? If so, how?
5
What is the best approach to repair outside cantilevered wood deck joists with dry rot?
2
How should I hang joists that are supposed to be doubled, but that will sit over the joining of two boards?
4
Could I cut out the affected area in a termite damaged joist or would I need to replace the whole joist if it's rotted at the end
1
Joist pulling away from center beam