Can I safely disable a three way fan switch to use for providing ground to remote three way box?

I have a bit of a unique electrical situation that I am dealing with. My house was wired with several three way lighting boxes that included a switch for a fan which is not used. I am working on transitioning to zwave controlled dimmers for LEDs and these switches require a neutral conductor to function properly. Since the end of line switch does not have a neutral present, I need to get a neutral to it somehow.

My thought is that I can disable the unused fan circuit and instead use the wiring that was going to that switch to carry a neutral to the box. I believe that this only requires removing and capping the common line (three way switch common line, not common ground) on both ends of the switch as this would isolate the switches from both line and load. I should then be able to use either traveler (preferably the no longer black coded white one) as a neutral by adding it to the neutral nut.

Are there any problems with this setup that anyone can see? Alternately, are there any alternatives that anyone knows of such as wiring a battery powered remote switch in place of cannibalizing the unused circuit that would make this unnecessary?

More technical details in response to comments: It is actually two parallel 3 way switches that are for both a fan and a light. They are all on the same breaker using a shared common neutral and shared common ground at the main light switches.

The 4 conductor to the ceiling fixture from the main switches is a 4 conductor with black for light load and red for fan load (capped at fixture since there is no fan).

There are two switches in the main box, both wired to interrupt between line and load in a 3 way configuration with both lines to the remote switches being 4 conductor lines with white coded to black and red as the two travelers and black as the common line/common load.

What I am planning for the fan circuit is this: 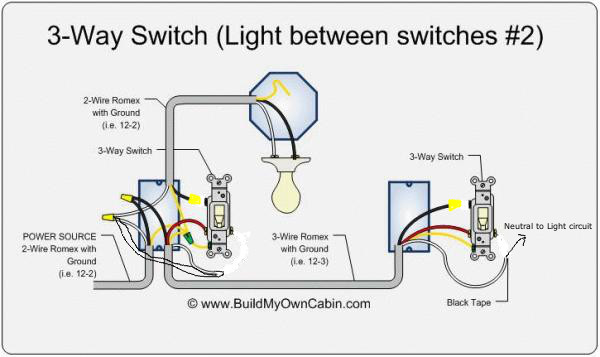 I'm not sure if I also need to remove the common ground or do anything with the isolated traveler that isn't attached to anything anymore. I'm not sure at what point (if ever) it is considered just a 14 gauge wire in my wall rather than part of the electrical system. It is also worth noting that on my diagram, the load is not actually attached to line at the fixture, but rather is capped with the neutral line only actually used at the fixture for the light circuit.

Since you posted the model numbers of the switches, now I can be specific.

OK, now I understand. Let me rephrase your question:

What do I do with the red wires?

Can I un-tape the white wire and use it as a neutral?

Yes. This is preferred over anything else (such as using the traveler/red as a neutral) since it puts your wiring in a standard configuration.

Not the answer you're looking for? Browse other questions tagged electrical wiring lighting home-automation dimmer-switch or ask your own question.

3
3-way switch for light with fan controlled by switch built into fan. Odd wiring layout. Wiring assistance required
3
Install Honeywell RPLS740B with three-way switches (disable three-way?)
1
How do I convert from 3-way switches to dimmers?
1
Can I use an unused red conductor as ground for a switch?
1
Is it common, or even correct, for both wall switches in a double gang box to provide power to a ceiling fan/light fixture?
3
Light Fixture Stopped Working After Replacing Its Three-Way Switch
1
"Wrong" wiring for three-way switch