I noticed the light in the fridge was flickering, same with the coffee machine LEDs etc on the same plug circuit.

Fortunately, I noticed that in the garage...this house built about 18 yrs ago; this in the US, South... 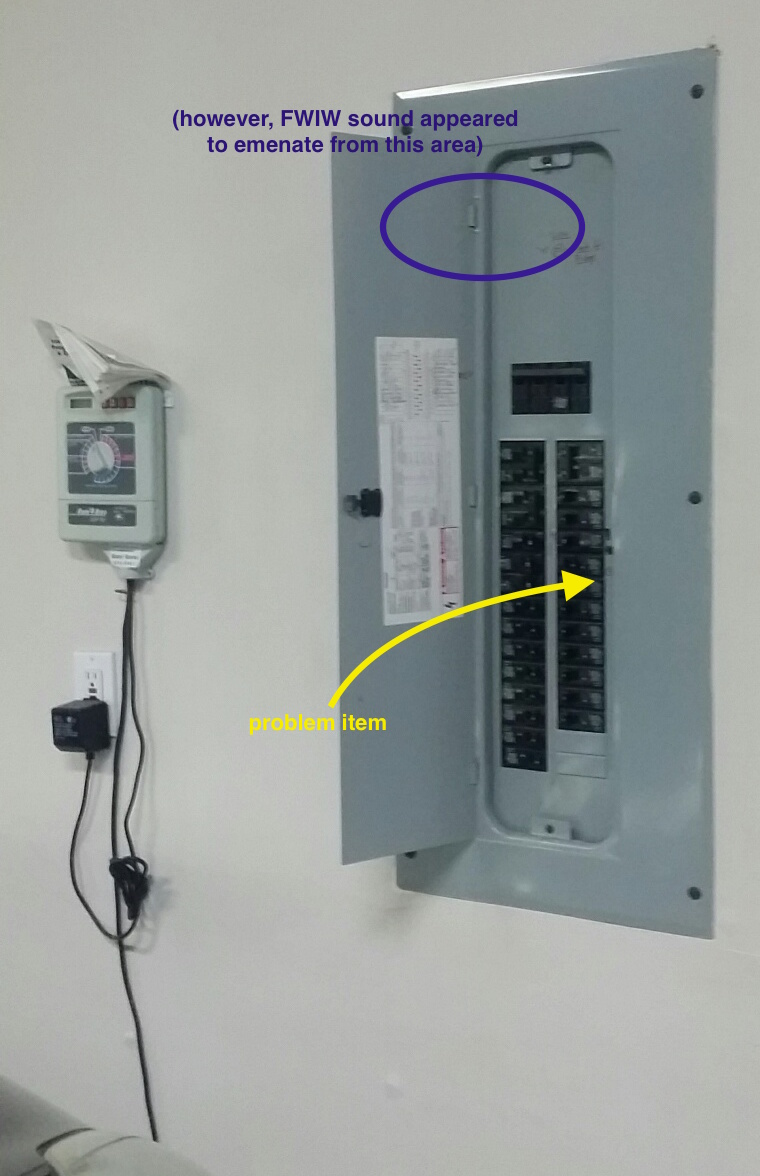 ... there was a buzzing / crackling sound coming from that powerboard.

It would buzz or crackle every 3-4 seconds for a second. You could hear it quite clearly if close (but not from say a few feet way). I carefully checked for burning smell and could not smell any smells at all.

When I turned "off" the fuse (turns out it was "#12") the crackling completely stopped.

Here is the type of fuse (apologies if fuse/powerboard are not the correct terms). 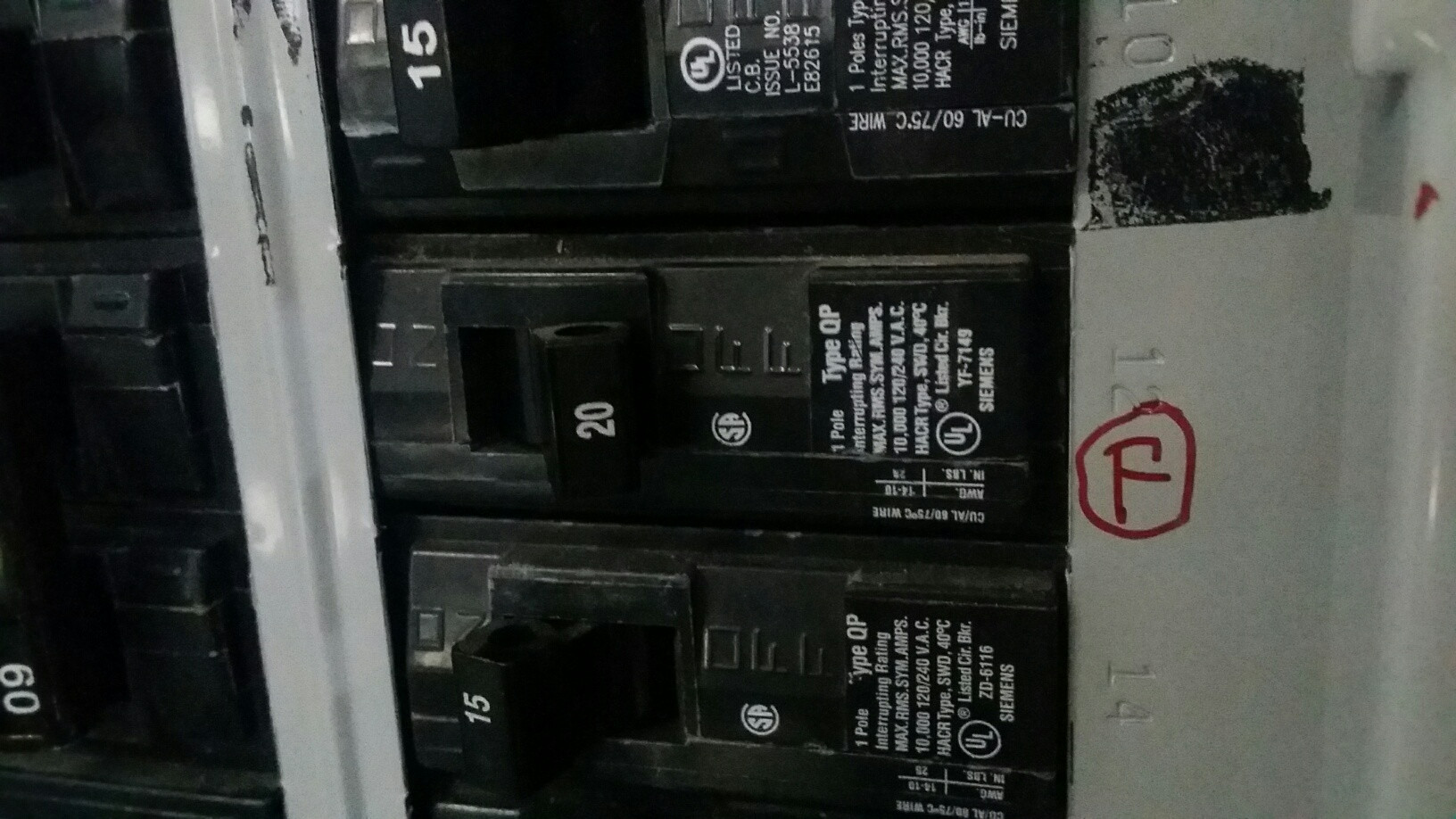 Now, I've simply left that fuse turned off (plugged the fridge/etc in different plugs). (1) there is absolutely no buzzing now from anywhere on the powerboard. (2) as far as I can tell, every other outlet in the house is working perfectly - no flickering lights/devices.

Note however that, perhaps disturbingly, the buzzing sound I heard seemed to come from the area indicated (up top left) rather than from "near the fuse thing" I turned off - of course it's hard to tell exactly, and it may mean nothing.

1) Is it likely that the only problem is the "QP" fuse unit thing? Or is it more likely some greater problem, perhaps in the powerboard generally or even the house wiring?

2) That type of fuse unit ("QP") - can I replace it, or is it a professional job? I note that the central strip of gray metal suggests one would have to pull off the whole powerboard plate / fascia? to get at it. 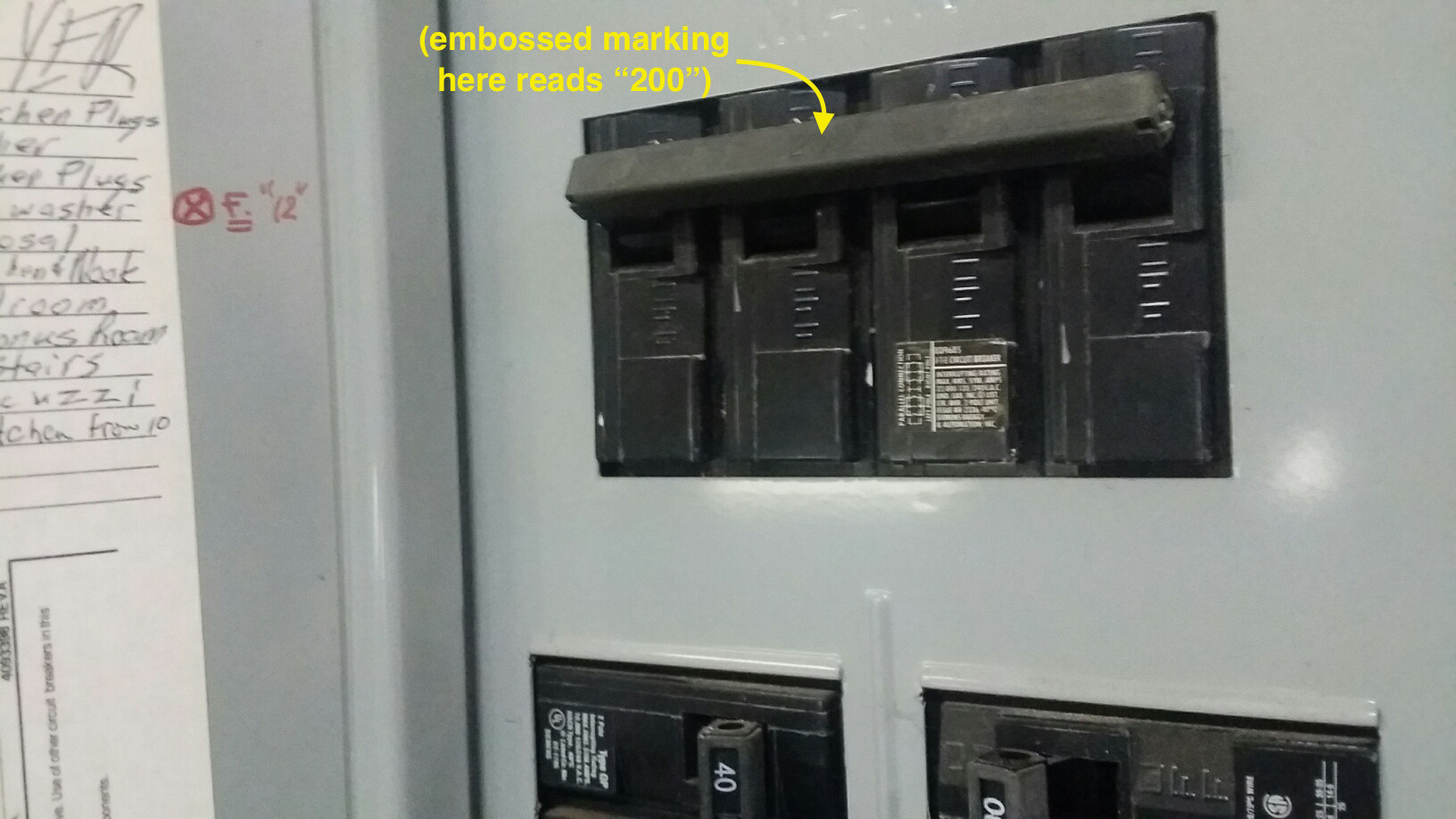 ... that appears to be the rating of the house (it's a big house, we just rent it. I feel bad for the owner when they have to fix stuff!)

Again fundamentally, are these user-replaceable; at any rate is it likely a bigger problem which needs to be checked by a pro?

(Previous domestic powerboards like that which I have seen: the fuse-units just pop in and out for replacement - of course, I could be completely mistaken, and the situation varies in Europe, USA etc.) Cheers, experts!

The circuit breaker is a dangerous place, and should not be opened without proper safety training. Although a handy person could complete the repair, I would suggest hiring an electrician to handle this for you. But, since you rent, you really should have the owner handle this issue. I suggest leaving the breaker disabled until a repair is made, and that a repair should be made soon (in the next few days).

1) It's most likely that the particular circuit breaker is failing (no longer making good contact). Other possibilities include loose wiring (much more likely for aluminum wiring).

2) As mentioned above, the QP breaker is fairly easy to replace. However, you as a renter should NOT replace it yourself. People unfamiliar with the dangers of electricity should NEVER open up their circuit breaker panel. Note that it may be impractical for you to de-energize that panel, so the repair could not be made reasonably safe. If you do choose to do the repair yourself, turn off the big breaker at the top first, but note that there still will be lethal voltages in the circuit breaker box.

There may also be other issues that need to be addressed, such as loose wiring, which may not be obvious to the casual observer.

3) The small 20A QP breaker costs a few US dollars. The 200A one at the top may cost about US$60. There is a small chance that the breaker box itself is damaged or wires need to replaced, which would increase the part cost somewhat. Also, due to code changes, you may now be required to replace the 20A breaker with a safer type (AFCI), which would be around US$30.

Leakage in the breaker (it's not a fuse) It produces enough heat to start a fire. I found one one where the heat was so intense it broke the plastic covers on the stove and main brakers. The aluminum feeds were so hot the insulation had melted off of them. I replaced the feeds with copper (screw that aluminum) and the two breakers, no problem. The breakers are available at Home Depot or Lowes. Turn off the main before swapping any breakers. The ones marked 200 are the mains. Be deliberate in what you do think before you do it.

3
How can I stop my lights from dimming when major appliances start up?
3
Is my dimmer switch failing or is it bad wiring?
4
How to diagnose an electrified refrigerator frame?
7
AC/DC adapters making strange buzzing crackling noise in all house, what causes it?
1
Light fixture buzzing sound
0
Evaluating possible early breaker failures
0
Dishwasher was tripping the fuse box, but now appears to be working?
1
Why does power to entire house go out when I turn on the microwave
0
Flickering circuits
0
Is it normal/OK for LED lights to “crackle” when turned off?