Do the nails stick out at all when toe-nailing studs?

So I'm attempting to do the "stick framing" method of building a non-bearing wall. I've got pnumatic nailer and I'm toe-nailing nails on each side. The problem is, because of the angle the nail doesn't get completely sunk into the wood. Is this a problem, or is it to be expected?

Edit: Added pictures for clarity. Is it ok that the stud developed hair line cracks from where the nails entered? This seems to happen every time. If I shake the stud it seems solid, but not sure if it's really a problem 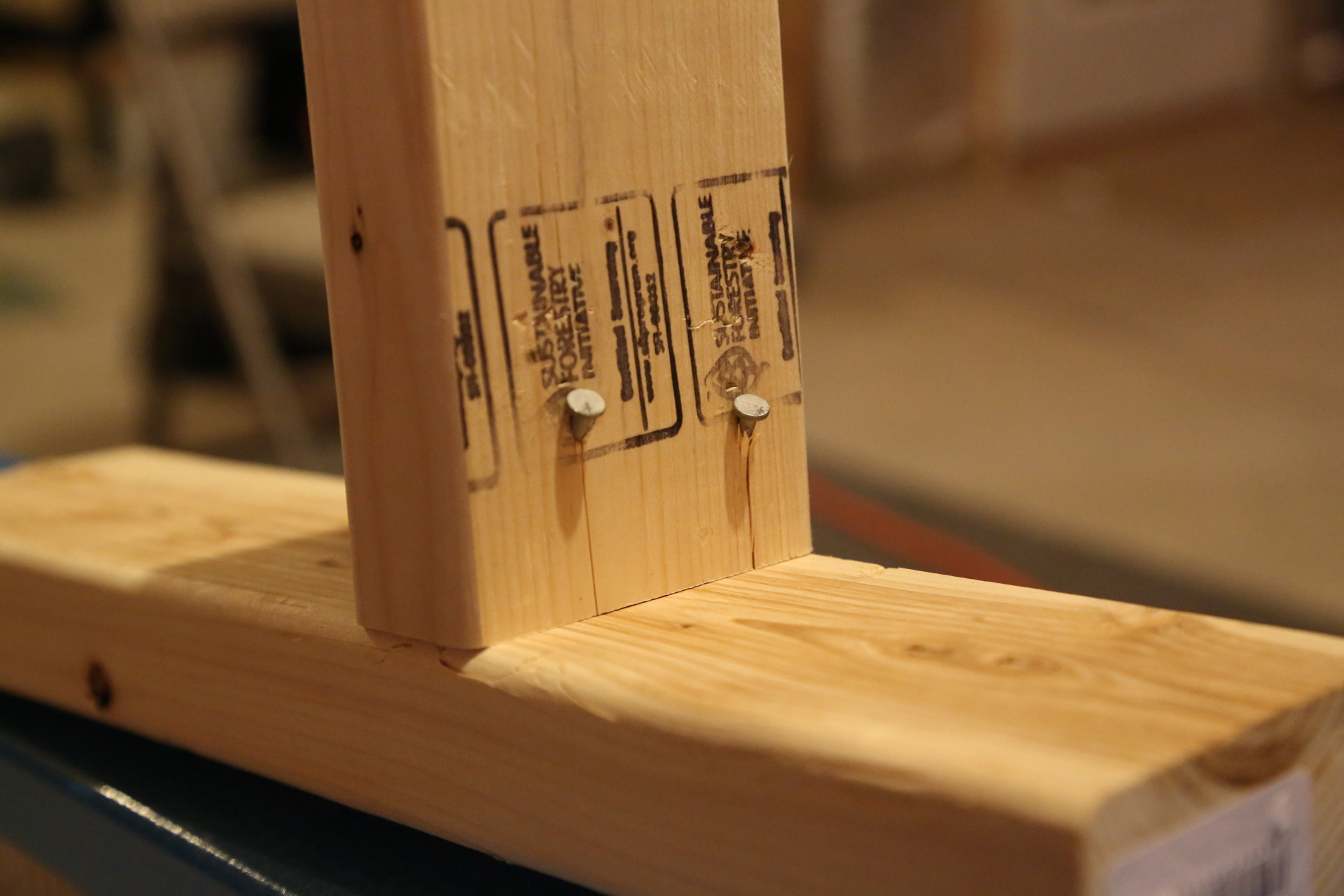 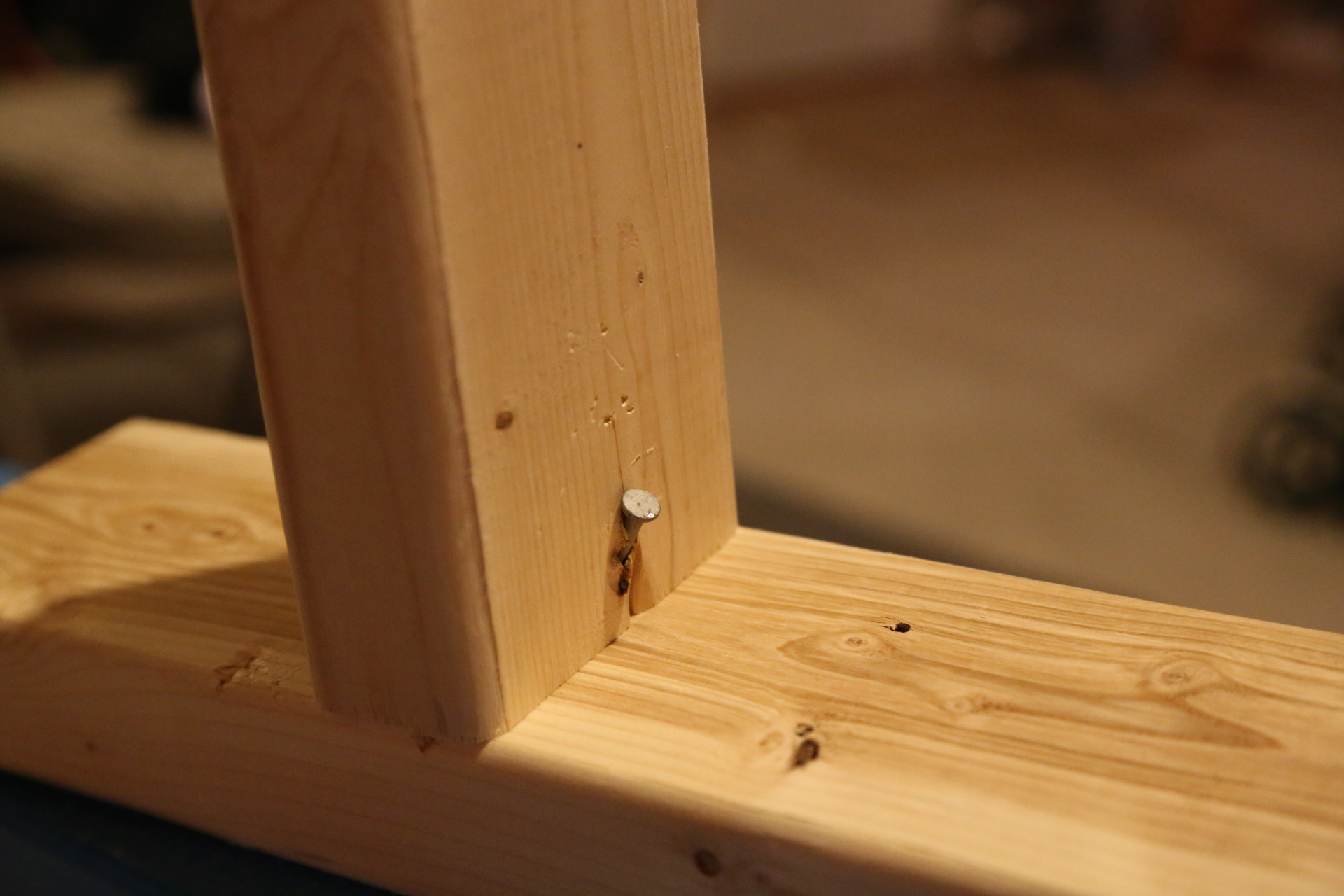 So long as one side of the heads of the nails are touching the studs, there is no problem. These nails merely keep the stud from slipping to one side or the other, and nails angled in from each side will do the job with no difficulty, even thought he heads are not fully flush.

If, for some reason, you had to drive a nail into the narrow edge of the stud (generally not a great idea because of splitting potential), the slightly protruding head might dig into the finish material. Not a problem with drywall, but paneling or wainscotting could be a problem. You could countersink the nail with a hammer or punch, but better to avoid such positioning.

Regardless of how the nail is being driven or at what bangle the bottom of the nail head should, at a minimum, be in contact with the framing member. A slightly counter sunk nail head will not stand a better chance of working it's way loose due to wood movement.

When using an air-nailer attached to a compressor there should be a depth setting which allow the nail to be driven to a desired level. If the nail isn't being driven correctly check that the compressors is keeping the tank PSI to at least 90. Also verify the pump is producing enough air flow (CFM) required by the tool.

What angle are you holding the nailer at in relation to the wall?

I hold the nailer around 80 degrees to the wall and jam the spikes on the nose of the nailer right into the stud, dig 'em in! Then you can adjust the nail angle a little to about, 20-25 degrees or so from the studs face. Then the nails end up just touching the surface of the stud. Safer too, lessens the risk of the gun jumping or slipping on firing.

Don't forget to add 3 to 5 drops of air tool light oil (into the air inlet fitting before you connect up the hose).... I do this daily and it keeps our big DeWALTs firing sweetly.

1
Are hairline cracks in a stud a problem
1
Given the variance in the depth of drive of a nail, how stringent are codes for length of nail when framing?

3
Can I use roofing nails to attach OSB/plywood to studs?
2
What type of nail gun is recommended?
2
Recommened nailing schedue for cripple studs between header and top plate
10
How do I get all these wires up from the basement to the attic?
0
How to toe-nail with 4 nails
1
Given the variance in the depth of drive of a nail, how stringent are codes for length of nail when framing?
1
Are hairline cracks in a stud a problem
3
How do I property tie a top plate that is bored instead of notched?
2
Should I use glue or powder-actuated nails when framing over gypcrete?