We moved into our new home to find that there were some cracks in the shower floor. Even worse though, was that we didn't even see them for the first couple weeks because they had been covered up with some stick-on leaves for traction. It's a textured shower base, but I never thought much of it as some people prefer more traction. However, they started to peel up and we found their attempts are patching the cracks underneath. They'd used some sort of caulking and then a piece of white sticky tape in multiple locations. I just figured that it had to be leaking as this solution was peeling up as well, but this shower is on a slab and we never saw (couldn't see) any leakage ourselves.

I attempted my own patches and we haven't had anything show up still, until the other day - we had a river flowing out of the back of our shower wall under the baseboards. So I've since removed all of the leaves that were left to start fresh and attempted to repatch. Now there is a (new) hole though that was underneath a leaf. Either we just punched it in recently or the leaf was working as a patch of it's own. Regardless, I know that this is the main leakage because it's more of a hole than a crack, about the size of a marble, and I also noticed for the first time that the water in this area doesn't drain down to the drain, it actually puddles up right at this hole.. so it's found a new drain. 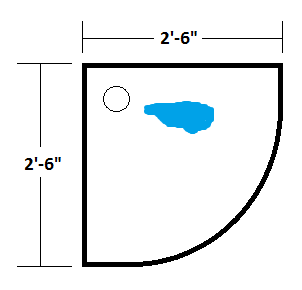 Our corner shower is about 2'-6" square with a rounded front and door on it. The drain is in the back corner. As depicted in the image, the blue spot is about where/how the water puddles up in the base and in about the middle of the large spot on the right side of it is where the hole is at. I can patch the hole as much as I want, I know, but this drainage issue will always force it's way through any patch I'd believe, or just sit there in the shower. I know what needs to be done with this base (scrap it and start new), but we'd have to replace the entire shower and I don't want this one hole to be the direct cause of that just yet. So my guess is, is there any sort of compound that I could apply to the base to basically almost create a new slope? Or is there any solution, other than scrapping the shower, to this problem?

This type of shower should not have bounce to it even it has foam underneath to give it a softer touch. The showers are more often supposed to be installed with a heavy layer of thinset underneath to stabilize the pan and to build up any voids. Some showers are a little softer than others but they don't bounce or flex... or they crack and break.

At this point you are asking us internetters what you should do. You are trying to repair it, you are thinking about products and so on. Well you can fix the crack with repair kits. However you cannot fix the flex that is causing the crack. So your repair kit will work until it dries out fully looses its flexibility and then you stand on the area again and it breaks. Maybe you notice a tiny rip... maybe you don't.

Use your resources better - your time and money. The base has to go - for sure. Not only will it be a lot less time to put a new base in but the big issue is the potential damage you are doing to the rest of your house. Water can slowly screw crap up and you don't want a small leak in places you can't see.

To answer your question - you only need enough slope for water to drain. I suggest that you give up on the pan repair and post another question around how you can get that pan out or alternatives for your situation.

There are options available:

The first option would be the cheapest. You would need to know the type of material that the shower pan is made of and then search on line for something like ABS shower pan crack repair kit. This solution does not address the reason why the cracks developed and therefore should be considered a short term fix.

Here's an example of a company that does this type of repair: Surface Doctors (I have never used them, this is only an example I found online).

The third option would provide the longest term fix but will most likely be the most costly as well.

Factors you might want to consider when deciding what to do:

Thinking about questions like the above may help in making your decision.

You could try this stuff, it's made for spas: ABS Repair Kit.

I'm a surfer, we use some super sticky "grip tape" type material that bonds directly to the surfboard surface to provide traction. It comes in all shapes and sizes including large patches. It sticks like hell to both fiberglass and epoxy boards and is waterproof.

It might be worth a try for temporary use, as you just need to get by until your planned remodel. It sure would save you some $$ if it worked, compared to other options. Many surfers use this to seal and cover dings to the deck of their boards. large deck patch

Not the answer you're looking for? Browse other questions tagged shower drain slope or ask your own question.

4
How much water is too much water underneath the basement concrete?
12
How can I reseal a shower drain on a pre-formed shower base?
0
How does one identify compatible shower drain covers?
2
Shower floor cracking
1
How to install a drain cover in the shower for this opening in the floor?
0
Shower drain location
5
Shower doors don't fit on shower base