We had a fan in our living room that started smoking so we're replacing it. However, the wiring on the new fan is different from the old fan so I can't figure out how to wire it into the ceiling.

The old fan was connected to two switches, one switch on one wall and the other switch on the opposite wall. The old fan also had lights. However, the lights and the fan blades were controlled by a remote control separate from the light switches. The wall switches just gave power to the whole fan and then the remote control allowed us to turn on the lights, fan blades or both.

In the ceiling there is one large wire that contains a black wire, a white wire, a red wire, and a bare copper wire.

In the new fan there is a black wire, a white wire, and a green wire.

If it weren't for the red wire in the ceiling, I would just wire up everything to the same color (black to black, white to white, and green to bare copper).

However, I have no idea what to do with that extra red wire in the ceiling. 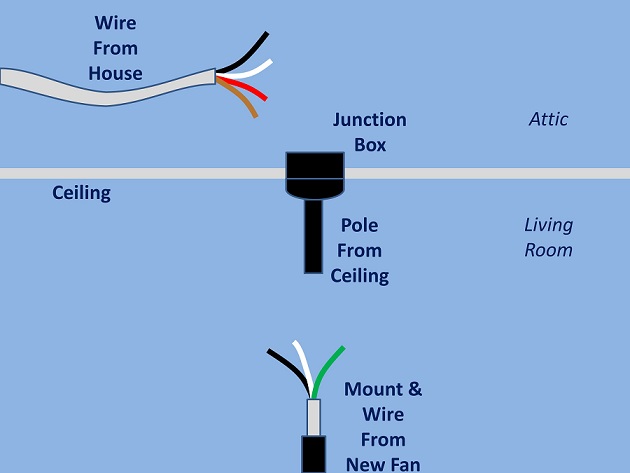 In some installations, there will be two switches for a fan - one for the fan and another for the light. The ceiling fan would have four wires (blue is common color for the 4th wire), and they are normally labeled Light, Fan, Common, and Ground. One wall switch will control the black wire, and the second switch will control red.

Your new fan either doesn't have lights, or the lights can't be controlled by a switch independently from the fan. The documentation should tell you what each wire is for, but your assumption should be correct - black to black (assuming your switch controls the black wire - check it), white to white, and green to ground. The red wire should simply be capped off by itself in the junction box.