These two switches are side by side in one double-gang box. The four way switches have no problem to turn on and off at three different location. But the outside light could not work independently by itself. It only works when I turn on the four way switch. What have i done wrong?

I don't believe you have four way switches. Four way switches do not have commons as they do not control the light directly, they simply break the path of two other three ways. Three ways have 3 screws, four ways have 4. (And the ground)

Next, (to answer your question) since the exterior light only works when one of the switches are on, most likely you've connected to the final wire feeding from the switches to the light. I believe this imagine below will help you out: 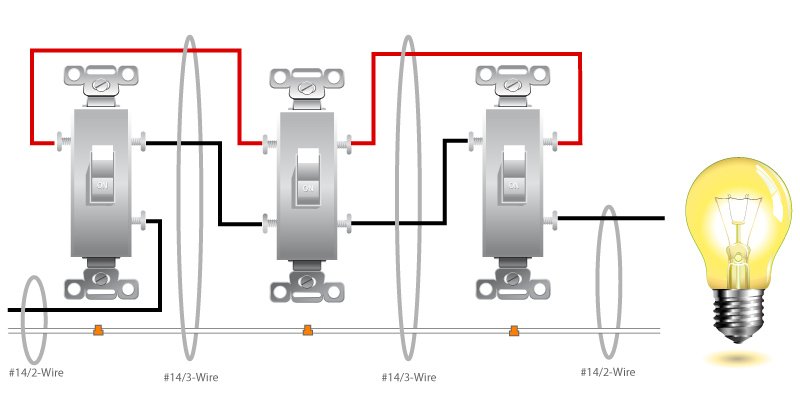 Basically, you use 3 way switches coming from the power source and then leading to the light. Then you can use an infinite amount of four way switches between these two.

Since you can control your light from 3 locations, but this location has 3 screws - this switch is a 3 way. Now it's just finding out if it's either the first or the last. If it were the first, connecting to the common would give you what you want. However, you've most likely tied off from the last switch leading to the light and so it only works when the overhead light works. There is no way to split off power from the current location and work as you desire. You'll have to run another wire.

0
Is there a way to change this circuit so that the receptacles are not controlled by switches?
1
Unusual three-way+ light configuration
2
Wiring a ceiling fan and light switch with two three-cable wires
2
Help wiring timed fan switch
1
Jumped light switch wiring
1
How can I control two lights together at one switch location and independently at two other locations?
1
Adding back removed 3-way switch from 4-way setup
0
Why doesn't my 3-way light circuit work in some configurations?
1
Wiring Options for 14/3 NM-B Cable and Two Single Pole 15 Amp Circuit Breakers