How to make a toilet seat hinge more stiff?

The upstairs toilet in our house has a gender-specific problem: the seat won't stay up without being held up. This is because the lid of the cistern sticks out a bit too much, so that the seat's centre of gravity is slightly on the wrong side of the hinge. I already replaced the seat when we moved in, it didn't make any difference: basically, the holes in the toilet where you attach the seat are a bit too far back.

I'm not going to try to fix this (very annoying, only for me) problem by replacing the toilet, or just the cistern. But, what would work, if it's possible, is to make the seat a bit more stiff, ie resistant to movement. It's only just on the wrong side of the vertical, so that if the hinge was a bit stiffer, i believe it would stay up by itself, without being resistant to movement in general (obviously it still needs to be lowerable so gluing it in a fixed position isn't an option).

There's no way to adjust the hinge, ie no screws to tighten, and it can't be taken apart without breaking it. So what i'm after is some sort of "anti lubricant" that i can put into the hinge. The hinge (on each side) consists of metal (or perhaps chrome-plated plastic) cylinders, which butt up against each other, similar to in this photo: 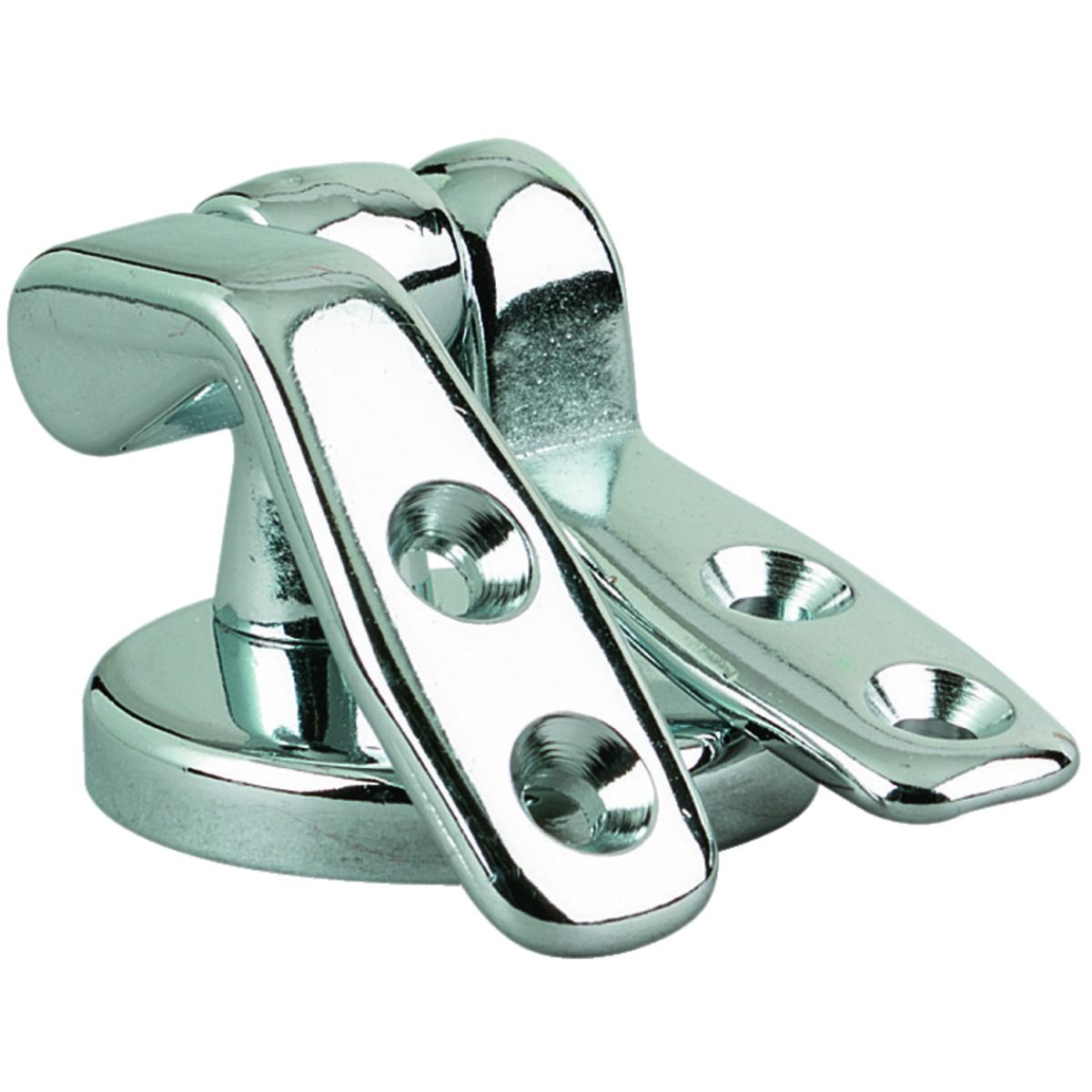 If i do put an "anti-lubricant" in there, it's going to have to be something that will be able to get into the tiny space between the rotating parts of the hinge.

Does anyone know of such a substance? Or have any other solutions? thanks, Max

EDIT: I have a 1 year old running around, so any solutions need to be child-friendly: that means that if the solution uses magnets, for example, the magnets need to be very hard to swallow.

EDIT2: i wanted to put a photo up of my solution, which was suggested by @handyman in the correct answer below: 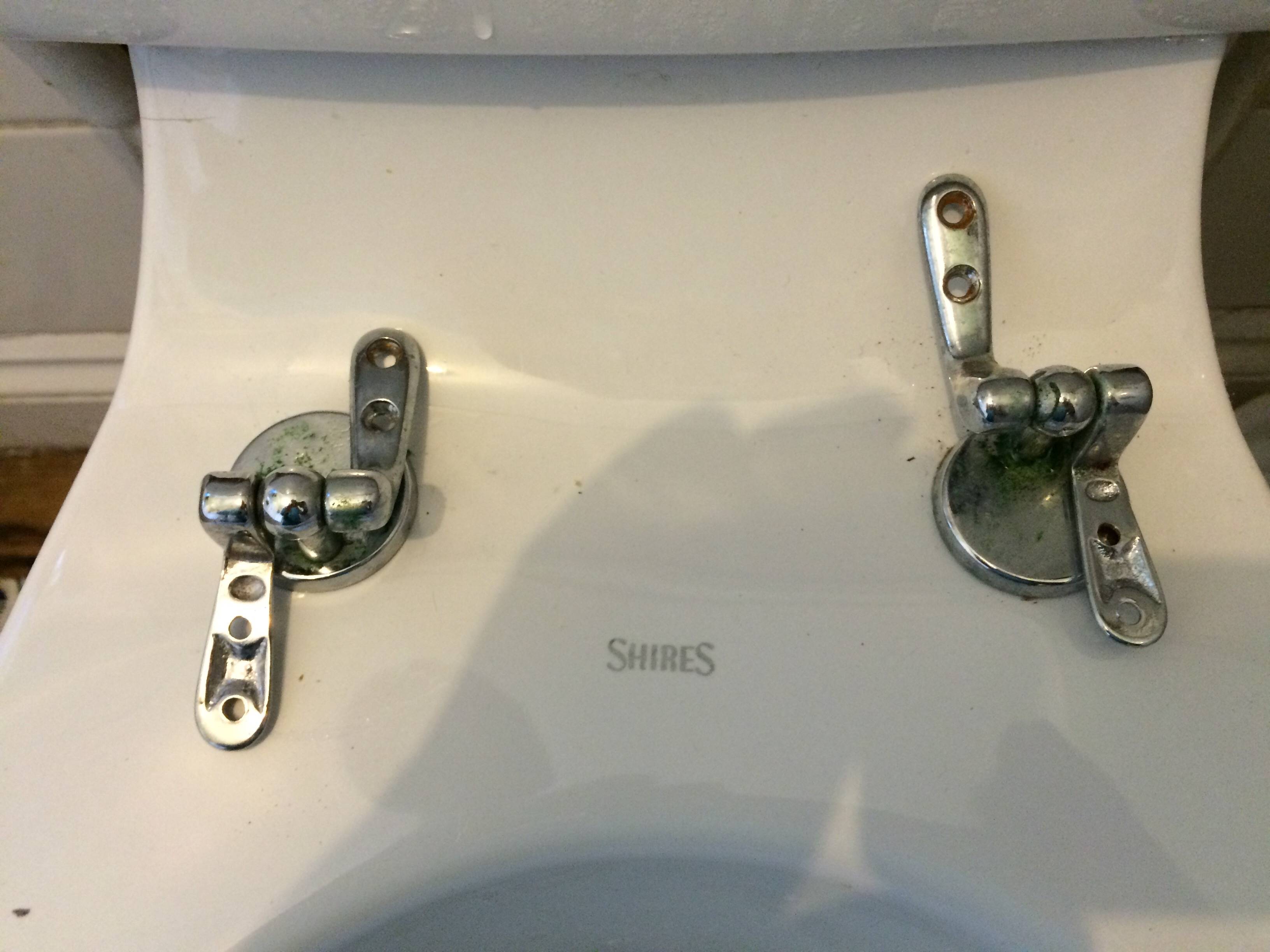 Before on the right, and after on the left. Basically i unscrewed the seat and lid, loosened the discs that hold the hinges and rotated each one 180 degrees. Fortunately i was able to rotate the vertical posts that hold the actual hinges as well, to keep the hinges pointing in the same direction as they were originally, but just an inch or so further forward, which made the crucial difference.

Some designs of hinge are often fitted the wrong way around. Try taking the seat off and swapping the hinges over side to side. I've seen this many times. With the vertical part of the hinge further forward it alters the balance point and hey presto, the seat stays up.

Worth a second look at least...

If you're open to buying a new toilet seat you can find seats with stiff hinges such as this:

With little kids in the house, I've picked up a few of these type of seat from a local home store. They are marketed as "Slam free", "slow close", "quiet close" and similar. The hinge provides enough resistance so the seat will eventually slide to the close position, but it will not slam or start to fall by itself.

This might not be the cheapest answer, but my seats were due for replacement anyway, so it was a good option for me.

You have some other possible solutions if you do not want to replace with another lid as suggested in the comments.

let me begin by saying that my lid/seat is one of the thicker type of ones that is a little nicer, but that is also heavier and doesn't allow it to lean back like the plastic one that came with the toilet. With that being said, and coupled with the fact that I tried everything you had put on here, I finally came up with another solution. I simply drilled a small screw into the bottom of the seat (of course it being one of the thicker kind of seats you can drill into) just deep enough to where the screw wouldn't touch the toilet rim while the seat sits on the "bumpers" under the seat. I then attached a rubber band to the inside of the flush handle (inside the cistern) where a little loop of it hangs out (not too noticeable). From there, when you put up the toilet seat/lid, you simply loop the rubber band around the screw head on the bottom of the seat and it stays put. It cost me a screw and a rubber band, 2 minutes to install, but too much time being aggravated with no solution and failed research on the problem. I just wanted to share with you my solution so maybe it might help someone else eliminate some wasted time and frustration in the future. Thanks!

Not the answer you're looking for? Browse other questions tagged toilet hinges lubrication or ask your own question.

2
How can I build a vertical hinging stair safety rail/siding?
1
How to adjust hinges on interior doors?
1
How much weight can a piece of 5/8" drywall hold on a hinge?
0
How to remove a rusty screw and cap from a toilet
0
Cracked toilet seat hinge: repair seat or replace seat?
1
Cabinet hinge fastener