In a cool damp climate, should I use hardwood or synthetic decking material for a deck that will be near a large tree?

We're building a 12x24 deck in our south-facing backyard in Seattle (aka rainy Pacific NW). There's a very large willow tree in our backyard that doesn't directly hang over the deck, but certainly drops plenty of leaves that float down to the deck. The really wore out our previous (old) cedar deck.

We were considering Ipe, but our contractor cautioned that as a hardwood, it can get very slippery from the accumulation of pollen from leaves. He thought that a synthetic like Trex would provide more traction.

Anyone had experience with this? Or recommend decking material that's relatively low-maintenance (and looks good) that would work well in this situation?

IPE is very very nice and really good material. As to your concern of slipping then using an anti slip decking oil will be most effective. Be sure to look at DD5/DD6 Anti-slip specially designed for this use. And protects from mould and algae 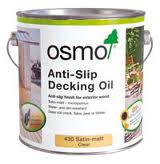 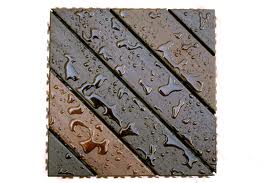 Please take a look at this post, maybe it could help you too.

How can I improve traction on an outdoor plywood ramp?

It is a bit of a shame putting anti slip strips that could ruin the look- but maybe wisely choosing areas for some strips is a good idea.

There are other solutions specially made for decks. 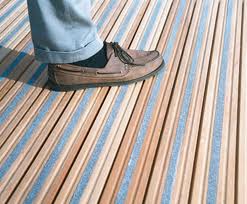 Also you can take a look at this alternative. It could be difficult to clean though. But if you deck has enough space for leaves and bit to fall through it- it might be goood

Thanks for letting us know where you are -- it makes a huge difference in the answer I would give. I lived in Oregon for ten years and answers for the PNW are different because of the rain and other considerations.

Whether you choose cedar, redwood, or ipe, there's some basic maintenance that you should do every year in the pacific northwest to keep the deck surface from being slippery. The problem isn't cedar or leaf accumulation per say, it's the mold and moss that grows on top (both are very slippery), and the acids from leaves decomposing on the deck that will eat both the top side and underside of the wood -- which will also contribute to how slippery the surface feels. Additionally, if there isn't sufficient air movement under the deck, the joists will easily rot where the boards contact the deck, which will cause the entire deck to fail.

I would recommend that you get a cedar deck again, as it's the most cost effective in your area. However, you need to sweep the leaves off of it regularly, and once every other year you need to clean it with a power washer and then re-stain/seal it to keep the surface from feeling slippery. Make sure the deck is far enough off of the ground to have air movement beneath it. Having the air movement will help keep the undersides of the deck from rotting.

I would insist that the builder install the decking with screws and not with a hidden fastener system or nails. With screws, if a piece of decking starts to rot, warp, or split, you can easily pull it up and replace it yourself. With a hidden fastener system installed with screws, you can also do this -- but you have to take up the entire deck. And nails? Fast to build, but forget about any repairs.

Ipe is expensive and very water resistant, but will still need to be sealed every few years in your climate -- in my opinion, this takes away from the natural beauty of the wood. Trex is an OK material, but a lot of people have had problems with it 'sagging' in wet climates, and I feel that the relative roughness of the surface and that it can't be power-washed and re-sealed is just asking for moss to grow on it and form a highly slippery surface in just a few years.

Not the answer you're looking for? Browse other questions tagged deck product-recommendation or ask your own question.

11
How can I improve traction on an outdoor plywood ramp?

2
How should I build large concrete footings for my deck?
6
What type of lag bolts should I use for a deck?
4
What kind of latch mechanism should I use for this movable ceiling under my deck?
2
What steps should I take before staining a deck that has weathered for several months?