I have a water pump at my home that I want to connect to 12 switches, so that each one of them can turn the water-pump on/off. Can it be done?

Yes, you use 4-way switches. Here is an animation that shows how they work. You can have as many 4-way switches as you want, in the middle. http://users.wfu.edu/matthews/misc/switches/4WayAnimation.html

Changing the switch causes the pump to change. If it was on, it will be off, or vice versa. The switch position will not tell the user whether it's on or off. If you want that, use switches with a "pilot light" feature.

EDIT: Folding some of my additional comments into my answer.

There are many "smart switches" on the market that can do a lot of things. You may be able to adapt these easily. Some of them even use wireless controls for extra switches, so you don’t have to run wires everywhere.

You could also use pushbuttons (so the pump only runs when a person presses a button). Either the pushbuttons would have to handle a LOT of current… or they could switch a small DC voltage (12 or 24 volts) which would then operate a relay to power the pump. The power would come from a small transformer at the pump. Even better, use a time-delay relay, which will continue running the pump for a set amount of time, so you don’t have to keep holding the button e.g. while the toilet refills. Edit: Here's an example of a low-voltage system. I only show 2 pushbuttons here, add as many as you want. Code-legal versions of these parts are common. 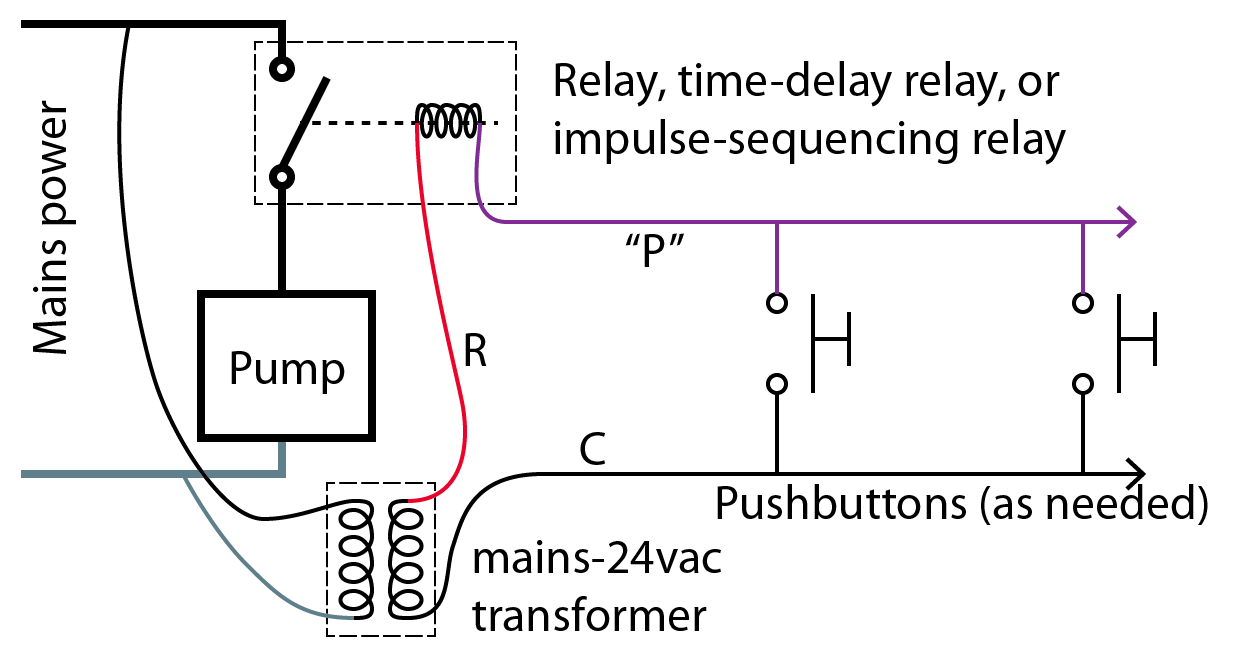 A more sophisticated method is commonly used in industry. Each location has TWO pushbuttons, an "on" and "off". There is a latching relay at the pump. If someone presses "on" anywhere, the relay switches and stays on. Push the other, it switches and stays off. You'd need at least 3 wires, but they can be thin wires. You can’t see the pump status unless you add a pilot light (4th wire). But you don’t really need to - if you simply press “off”, it’s definitely off. Edit: Here's an example of a latching relay circuit with 2 push buttons - note the optional "power relay" in case a latching relay isn't strong enough, and also the optional indicator light circuit.

Edit: There's a variant on a latching relay called an impulse sequencing relay. It only requires one pushbutton, not two, so you don't need the circuit labeled "O". Every time you press it, it will toggle the relay between on and off. But it will not indicate on or off, so you might want that indicator light circuit.

Lastly, if you want something really intelligent, you can feed buttons or switches to an Arduino or Raspberry Pi controller and program it to respond as you wish.

This is commonly used in industrial controls: 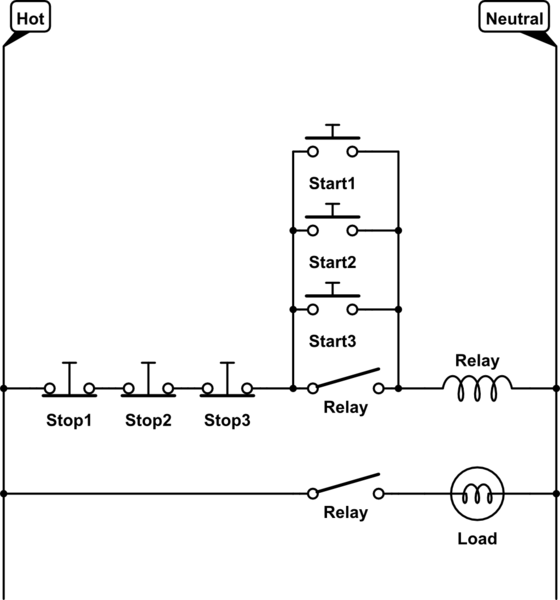 I've drawn it as a ladder diagram because I think it's easier to see the individual circuits and the interactions between them. You can translate from that to the actual wiring.

I'm using a second relay contact to power the load so that the control circuit only has to handle the relay, which is almost nothing in most cases. You can also add a light in each panel as Wolf mentioned, wired in parallel with the load or with the relay; which one is up to you, but consider how it might fail.

For that many locations, I'd strongly consider one of the types of switches intended for home automation applications. One switch would actually control the pump, and the others would signal that switch to turn on or off. Some of them offer battery operated remotes that can be used without any permanent wiring, or you can mount a switch in a normal junction box as long as you have a neutral and hot wire available.

maybe I'm missing the issue, but it would seem a lot simpler and possibly cheaper to just install a small pressure tank controlled by a single pressure switch to the incoming water line.

Not the answer you're looking for? Browse other questions tagged water switch or ask your own question.

4
Do you know any switches which turns on/off based on day light?
1
Finding out what light switches turn on or off
0
How to remove old light switches, leave circuit always on?
0
Automatic turn off of water pump as water tank overflows (Manual turn on is needed)
0
How can I turn off this shutoff valve
0
Shut off valves to tankless hot water heater won't turn
0
How to connect two different height water tank on pump?
2
How can I fairly distribute water pressure and flow throughout my home?
1
Do nice water pump pressure switches exist?