My florescent lights need a shake or a hit to work

I have a Wave Twin Fluorescent Ceiling Light that doesn't light up in general.
If I switch it on, it only lights up a very small part at one end.
I need to shake it or give it a hit a couple of times to light up, but it only keeps up until I switch it off again, then I need to hit it once more a couple of times for it to work for the next switch on.

Anybody knows what to do, what to change for it to work?
Before some time it worked well enough.

I noted yesterday that it functions with an electronic ballast, so it doesn't have any starters 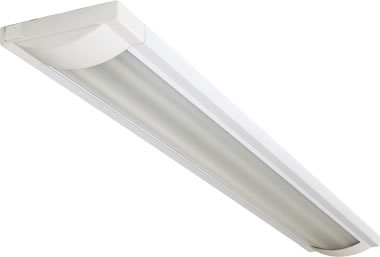 I gather this is an expensive, quality fixture that uses dual T5 bulbs, and it has an electronic rapid start or progammed start ballast (that is to say, there's a small time delay before it comes on).

All fluorescents are discharge lights (like neon, mercury vapor, sodium and metal halide). They all work by putting high voltage between the ends of the tube, which "strikes an arc" down the length of the tube, and the arc makes the light.

These rapid or programmed start ballasts have a second trick, they also put a low voltage between the two pins on each end of the tube, which preheats filaments in the ends of the tube. That is the orange glow you see. Not every ballast does that, but these do, and those warm filaments mean the arc can strike at a lower voltage and with less wear-and-tear on the bulb.

As a bulb ages, it takes higher and higher voltage to strike the arc initially. (Also, you're getting less light out of it.) When the voltage goes so high that the ballast can't start the bulb anymore, we call the bulb "dead".

So if you look closely during the first second of startup, you should see that orange glow on BOTH ends of the bulb. If you don't, the bulb is not seated properly in its socket, or the filament is burned out. If you do, the bulb has probably reached the end of its life. The new electronic ballasts turn off the filaments once the arc has struck.

Another possibility is the ballast has burned out. That is the problem with these electronic ballasts, often made in China with RoHS lead-free solder in which the zinc crystallizes out, and capacitors which eventually fail (especially if they were made during the 2005 capacitor plague, google it).

It doesn't have starters - those are a throwback to the 1950s.

I would start by removing the bulb(s) and putting them back in. Just to see if a plug is not fully seated. Look for damaged lamp sockets while you're at it.

Most likely, it's the bulb.

If that's not it, it must be the ballast. A fixture of this quality is designed to be serviceable and replace sockets and ballasts. While you're in there, look for loose wires before ordering another ballast.

Before buying a ballast, also price LED "fluorescent tubes" which require no ballast, or replacing the whole fixture with an LED.

Difficulty starting is a symptom of worn-out fluorescent tubes. They have a finite lifetime. Some might die after a couple of years regular use, some from the same batch might last ten or more years. See if the tube is slightly darker near one end.

Replace the fitting with a LED strip.

Not the answer you're looking for? Browse other questions tagged lighting troubleshooting fluorescent or ask your own question.