I moved into this 15 year old house about a year ago and there's a RJ45 wall jack in my office (2nd floor) and there's another one in the living room near TV. I'd assume there's planned in for TV to use Internet. I have not seen any other RJ45 jack anywhere else through the house.

So I plugged a cable from my router to the jack in my office, and I have no signal on the other end in the living room (I plugged a switch). I took out the wall cover plates on both jacks, and the they are the same type of Cat5e cables. Is there a easy way I can test these?

My guess is these two Ethernets don't connect to each other; they both go to some third location yet undiscovered. Back in the old days, there was no WiFi, and there was an Ethernet run to everywhere you wanted networking, the runs went to a single location where you had a switch, router, DSL modem, possibly a server etc. This equipment took at least a shelf or two and had a cluttered, cables-everywhere hacker aesthetic. Probably near a phone line outlet since DSL was still king. A homebrew version of the "wiring closet" you have in offices today.

I would look at locations in your house where that would make sense or be likely to be "wife approved". It won't be a place you would ever want to put a TV.

Your testing method seems reasonable and probably rules out continuity between those two drops. (The exception might be if your router or switch don't have Auto MDI-X sensing and you needed a crossover cable, but that's unlikely as most devices made in the past few years should figure that out automatically.)

So if these two drops aren't directly linked, where do they go? Most often these run to a basement, attic, or closet. Possibly (but not necessarily) wherever your home's telephone wiring terminates. As a first step, try to figure out where the lines go - perhaps you can find a common termination point and locate your router or switch there to supply the drops.

If visual inspection isn't working, you can use a tool called a wire tracer or tone-and-probe kit to track where the cables go in your walls. The tool has two pieces: a tone generator and a probe. You'll either plug the tone generator into an RJ45 port, or open up the drop and clip the tone generator to a wire in the ethernet cable. The toner generates a signal that flows through the cable, effectively using the cable as a radio broadcast antenna. The probe then picks up on this signal (usually a beep or siren type tone) and replays it. You can move the probe back and forth along your walls, and identify the path the cable is taking. 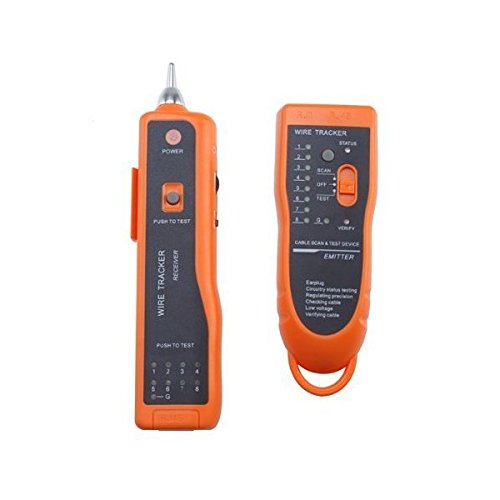 Tone and probe kits are not super cheap tools, but a basic comms-oriented one can be had online for around $25 (example). I have a cheap Harbor Freight one that I've gotten a surprising amount of use from in various wiring projects.

Not the answer you're looking for? Browse other questions tagged testing ethernet or ask your own question.

1
Home network wiring network closet
2
How can I use the existing structured wiring panel to get internet throughout my house?
2
How to set up home network w/ fiber from street & unterminated Cat5e in garage
1
Use existing cat6 wiring in apartment for data
2
How to reuse a keystone jack
3
Re-wire Cat5e RJ11 jacks to RJ45 ethernet
2
Wiring ethernet cable from AT&T fiber Modem to a specific room
13
How do I use existing cat5e wiring to distribute internet in my house?
0
How to connect the modem to wall jack through a BIX1A panel?
1
Home Ethernet "patch" panel - how to approach?