Which breaker should trip with a ground fault with a subpanel?

I am installing a subpanel in an outbuilding and understand that I need to use a four wire feed and keep the ground separate from the neutral at the subpanel. I know that is code, but I like to understand how things work. I am trying to conceptualize how a ground fault on a circuit in the outbuilding would trip a breaker and which would trip. There are four breakers involved. The main, the breaker supplying the subpanel, the "main" at the subpanel and the final circuit breaker. If a ground fault occurred, which one would trip? It would seem the final would need to, in order to isolate the problem. Does the surge caused by the fault travel all the way back to the main through the ground wire then back to the final breaker?

Looking at a diagram, is often a good way to understand a problem. Below is a simple diagram that shows the fault current path. 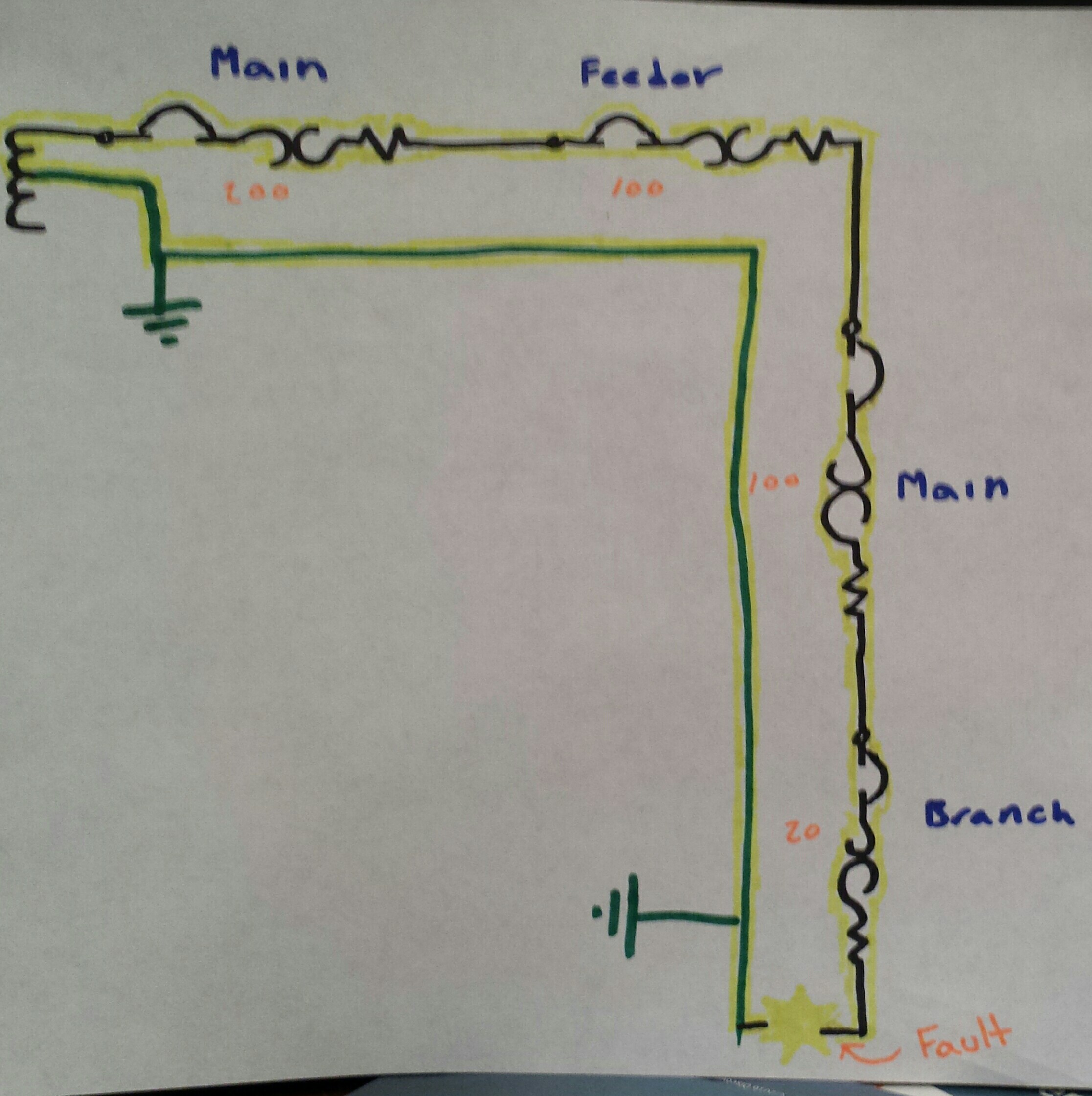 You can see that the fault current will flow through all the breakers, and return to the source (the transformer) along the grounding conductor.

You might be inclined to think that the fault current will be extremely high (tens of thousands of amperes). However, due to the fact that wires have resistance, the current might be surprisingly low.

For this example, we'll assume the fault current is less than 100 amperes.

Because the current is not above the instantaneous trip level of any of the breakers, the short-circuit protection of the breakers will not trip. However, circuit breakers also have thermal protection, which opens the circuit based on overheating caused by current flow (overcurrent).

Each breaker will trip according to it's trip curve, based on multiples of current over the rated current of the breaker. Basically, as the fault current flows, the thermal protection device in each breaker begins to heat up (along with all the wiring in the circuit). Obviously the larger breakers (100 & 200 in the diagram) can handle more heat (current), so they're going to be able to handle the less than 100 ampere fault current.

Since the fault current is higher than the rated current of the smaller breaker (20 in the diagram), the thermal protection device will begin to overheat. With such a high current flowing through it, the device will likely open within a few seconds. However, if the current was lower, it could take much longer to trip (even minutes).

If we take another example, where we've figured the fault current at 150 amperes. Even though the current is now higher than the rated current on three of the four breakers, the smaller breaker is likely still going to trip first. This is because the time before the thermal protection of a breaker trips, is based on the the amount of fault current above the rated current.

In most real world applications, the smaller breaker will trip first. If the resistance of the fault circuit was low, it's possible for the fault current to be above the instantaneous trip level of all the breakers. In that case, the first breaker (main) will likely trip first.

In this example, the 20 ampere breaker will trip first (unless any of the other breakers are GFCI breakers).

Hold on, folks. The fault may not be at an endpoint. Consider a fault inside the sub-panel, i.e. your L1 feeder wire frays against the sub-panel case. It's before the sub-panel main breaker, so no help there. Without a wired ground path back to the main panel, the main panel breaker would not trip, as not enough current would flow. (earth is not a great conductor, so grounding electrodes hammered into the earth won't serve as a high-current ground.)

So without a wired ground, the 'ground' in the outbuilding would simply float up to 120v. You'd have 120v on every ground pin and metal part of the electrical wiring, and any equipment which grounds chassis. (neutral would still be neutral - remember they are isolated from each other in a sub-panel - so equipment would still work normally.)

Of course your outbuilding 'ground' (now hot) would hunger for a path to main panel ground, and it may find one. As long as flow is less than 100A (i.e. resistance is >1.2 ohms) it won't trip the main panel but will make heat - up to 12,000 watts of it - in places you probably don't want heat!

Or it could be seeking out parallel metal pipes and causing galvanic corrosion in them, and it could potentially do this for a long time. Which can put gunk in your drinking water, as Flint learned. Streetcar systems, hastily built, used to have a big problem with corroding parallel gas and water mains until they buried their own "ground feeder"... in other words, exactly what we are talking about here.

Anyway, to answer your question, current goes through all the breakers that it goes through. A fault is simply more current flowing through the "hot". Ideally enough to trip a breaker, but not necessarily. We try to help that along by providing solid current paths for faults to take.

This isn't necessarily the smallest. Which is why the code has refers to "Selective Coordination". See the definition in Article 100.

Coordination (Selective) Localization of an overcurrent condition to restrict outages to the circuit or equipment affected, accomplished by the selection and installation of overcur rent protective devices and their ratings or settings for the full range of available overcurrents, from overload to the maximum available fault cur rent, and for the full range of overcur rent protective device opening times associated with those overcorrects.

The smallest (amperage) and closest (in protection) to the fault should trip first. So if it's caused by a branch circuit in the sub, then the breaker in the sub would trip.

Think of it as the fault is working back to the main, yes, but along both lines - the ground and the hot supplying it. The hot line will reach the nearest breaker and trip.

6
Why does my GFCI circuit breaker trip with any small load, even after replacing the breaker?
1
GFI false trips, but everything checks out. (????)
4
Arc-fault breaker in sub panel, pigtail to neutral bus or ground bus?
4
New Eaton AFCI/GFCI breaker signals (5 blinks) ground fault, but doesn't trip. How to track it down?
2
Is there is a Standard on how much main service panel / main circuit breaker amps should be?
1
Wiring a sub-panel with an equal sized breaker on each end of the feed, which will trip first?
3
Possible to ground-fault protect both legs of a MWBC with two single-pole breakers?
0
circuit breaker that trips when there is a loss of power
4
Upgrading garage fuse box to breaker box using existing 10/2 wire with ground