I just finished helping a colleague clean out his (large) garage at his new house. He's gradually converting it to a indoor gym for himself and his kids (ie: indoor swing set, toys, etc, with a small corner for his weights). The previous owners used the garage for parking their cars, so the floor is a real mess: oil spills, random dirt and other spills, he himself spilled beer and food a few times on it. 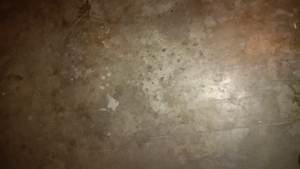 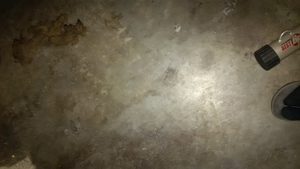 We need to clean the floor and make it look presentable, but there's a catch: certain items (bench, wooden play fortress, etc) have already been assembled and bolted into the concrete with anchors. Those areas were already clean, so no worries there, but this means we can't just buy a heavy duty solvent and use a pressure washer afterwards to blast it all out. We're going to have to just mop and scrub.

That being said, is there a particular general purpose cleaner we should use?

Interesting point: while doing some woodworking, he spilled a lot of carpenters glue on the floor, and when it dried, it easily came off with a paint scraper. The concrete looks very clean, and still has its waxy surface, so there must be a cleaner that can do this if cheap glue can. 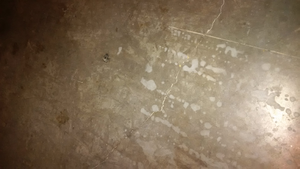 Is there some kind of general purpose cleaner I can use to mop the floor with periodically and gradually get out the grease, oil, and other stains. If we have to mop the floor 10 times, that's fine, since he's a bit of a neat freak, and would likely be mopping up footprints from shoes every couple of weeks anyway.

Use a solvent degreaser for concrete floors, following manufacturer's instructions, on the oily areas. Then mop with warm water mixed with a bit of liquid laundry detergent and let it dry.

If the treated area looks different due to alteration of the "waxy finish", use a hard floor wax remover on the entire floor, again follow instructions.

If you wish to restore the "waxy finish", apply a coat of hard floor wax finish. The cost of all the supplies needed should be less than $35.

Not the answer you're looking for? Browse other questions tagged concrete floor cleaning garage dissolve or ask your own question.