Range plug prongs are slightly exposed - Is that dangerous?

I just had a new range installed in the kitchen. The cord's prongs do not quite go in all the way. There's not a lot of space, maybe 1/8th to 1/4th inch. Is there any risk to the prongs not going completely into the socket? Thanks.

Theoretically, yes, a risk exists -- if you drop a knife or baking tray into that area, for example.

And frankly, if the plug won't go all the way in I'm worried about whether something else is goung on that might be a greater risk.

It won't kill you tomorrow. I'd still suggest getting it fixed.

If it's a surface receptacle it will look like the image under the cover. It is entirely possible to cut the hot conductors too long so that they wind up under the receptacle prongs. If that is the case it will create the exact problem you are describing. If the receptacle installation is new I'd simply ask the installer to come back and trim the wire back a bit to alleviate the problem. 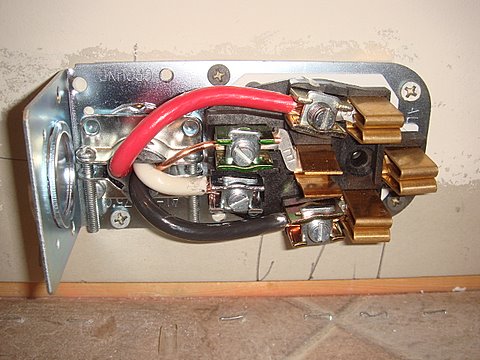 I had a similar situation once, and when the range was slid into position the bottom bracket of the chassis slid into the gap and made contact with a hot prong. Imagine my surprise when I grabbed the oven door later and got a nice 60hz zing. I was so shocked (to turn a phrase) that I did it again to make sure I wasn't imagining it.

So, yeah. That happened to me. Find out what the problem is and fix it.

Is it dangerous? Yes. One day you might reach behind the range for some reason and accidentally touch two prongs. A range is normally 220 to 240 volts -- you'd get a nasty shock. Probably not enough to do serious damage, but I wouldn't want to try it to find out, and if someone had a weak heart, it could be literally fatal.

I've had plenty of times that I've dropped something behind cabinets and went feeling for it, so the idea that months or years from now you might forget all about this and go reaching back there is not implausible. I'd be particularly worried about a pet or a small child. Not only would they have no idea that this plug is dangerous, but they're smaller and more vulnerable.

It won't hurt you if you don't touch it (with your hands or an object), so it's not a cause for panic -- I'm not saying you should evacuate the house and call 911 to send a hazmat team. But yeah, I would definitely get this fixed.

Before spending a bunch of money, if you're comfortable with doing simple electrical work, step 1 would be: (a) Turn off the electricity to the range from the fuse box. (b) Try to simply push it in further. If it goes in, hooray. If not, and you're comfortable doing it, you can remove the plug, unscrew the fixture, and see why it won't go in. Likely something is blocking it. If you have not done your own electrical work before, a 220 line is not where you want to start. Call an electrician.

1
Ontario kitchen reno: does a gas range require a 240V 50A receptacle?
1
New kitchen, new home runs for appliances…lights flicker, what could be the cause?
0
What is this thing that looks like a light socket but isn't
1
Gas Range requires 120V 15A yet comes with a Nema 14-50 Plug
1
Converting KFDD500ESS Dual Fuel Range from 4 wire to 3 wire plug
3
What are the allowable ways to wire a kitchen range hood? (USA)
4
Can an outlet for a dishwasher be located below the floor?
1
Can I use a range plug (50A) to run my 30A dryer?