I'm planning an addition which will be 16' wide by 27 feet long overall. the roof will span the 16' dimension. my question is, if there is no plan to use the space above the ceiling for storage or occupancy, can I have a clear span of 16 feet with no supporting beam. Again, this is the roof. My guess is that I would use 2x8's for the rafter ties/ceiling joist, and also 2x8's for the rafters. There would be interior framing inside the addition, but there would be an area of about 15 x 16 that would be clear. The pitch of the roof would be about a 4 pitch.

Thanks for the responses,

Yes the ridge will be centered on the 16' span. I don't want to use trusses if I don't have to since I will be doing basically all the work myself, and building them in place is easier for me. Also, I am matching the pitch of a small existing part of the house that will be removed and tying the new addition into the main building. In essence, I want to make the new addition fit the existing house / siding, not have to modify the existing building to fit a truss. I know I could get them close, but I'd rather do it myself. Also trusses would be more expensive.

My real question is can the room I'm building be clear of support beams. The ceiling joist would span the 16', and basically hold only sheetrock/insulation/wire for weight. the raters above would form the tops sides of the triangle and support the roof load. I do live in CT, where we can have a lot of snow (or not). I would assume that if there was a lot of load on the roof, the load would tend to push the ridge down and the walls out (and down), and put the ceiling joist in tension.

The local IRC book would be handy for you. I have a few screen shots that may help, but only as a guide line. A building inspector will have the final say, but this is what they go by.

This does depend on where you live, for it has to do with snow loads. Roof cover factors in a bit too. 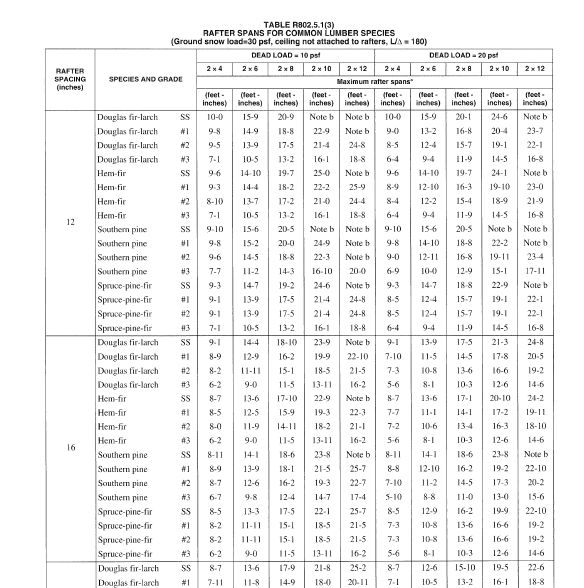 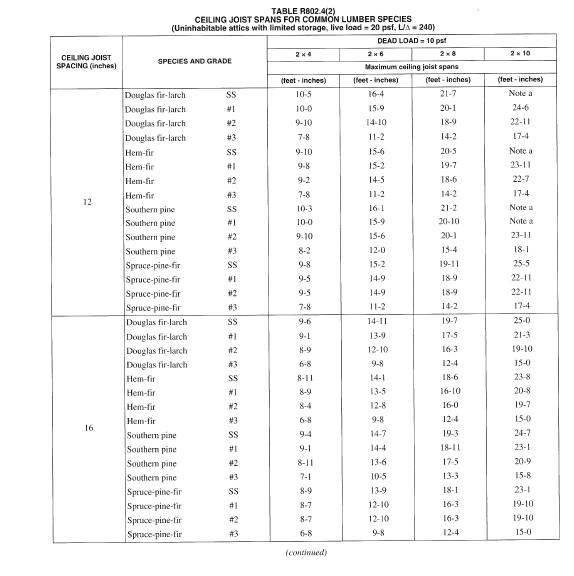 2
How can I build a temporary support for rafters?
8
What size ceiling joists and rafters should I use for a 14' span?
1
How can I add joists to an existing trussed ceiling?
7
Increase size of ceiling joist compromise roof strength?
1
Can I span 23 feet with doubled 2x8 floor joists?
0
maximum ceiling joist to beam span without joist hangers
1
How to safely attach block-and-tackle to 2x8 ceiling joist(s) to handle 1000-lb load?
2
Ceiling and roof sagging in ranch house
2
References to calculate lumber size and span for flat roof?