How do you wire a three switch receptacle (all three switches are together in a stacked appearance) with a GFI outlet in a two gang box? There will be a light above the bathroom sink and a fan with a light.

I'll split it up below into three pieces: wiring at the switch box, wiring at the above sink light (at least with it being second in line), and wiring at the fan/light unit in the ceiling. The grey wire throughout is the neutral, the yellow boxes are wire nuts (you'll need more than shown to splice the hots and grounds at each box), and the ground wires are not shown just for simplicity. Make sure to run a ground and tie it together with every device and (if used) every metal box.

I'm assuming that nothing has been wired yet and so this is starting from scratch. For the easiest wiring, you would want to run the initial homerun wire from your panel directly to the switch box. 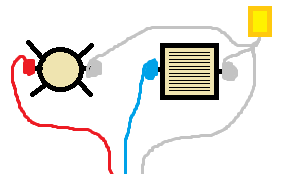 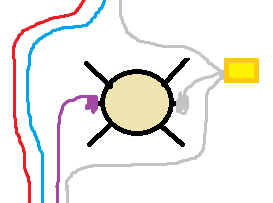 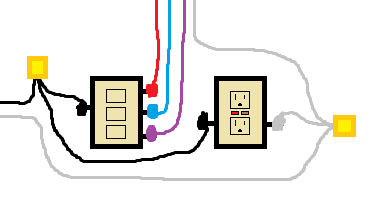 Power comes in at the switch box. Pigtail off of the hot to feed the GFCI and the common on the switch. Pigtail off of the neutral and connect it to the GFCI. Run your second set of wires between the above-sink light and the box and re-identify them on each end so that you can keep up with which wire powers what. Tie the neutrals together and screw in one wire to each terminal on the switch. (This is where you pick which switch controls which device.) Connect your grounds in the box and you're ready to move on to the above-sink box.

Connect whichever hot that you want to use for the above-sink light to the fixture. Pigtail off of the neutral and connect to the fixture. Run your next set of wires between the fan/light unit in the ceiling and your above-sink box. Remember to re-identify the wires so as to stay consistent and make it all easier on yourself. Connect the grounds and move on.

Not the answer you're looking for? Browse other questions tagged wiring switch receptacle or ask your own question.

4
How should I ground two switches in a handy box that were previously ungrounded?
2
How do I wire a light switch and outlet in the same box?
0
How to wire GFCI together with two switches controlling light/exhaust fan and vanity light
1
GFCI receptacle and 3-way switches
0
How do I wire one outlet and two separate light switches in a three-gang box?
2
How can I add an outlet to a switch box?
1
How to wire two switches to control bathroom fan/light combo (only two 12/2 cables in receptacle)?
3
How do I correctly wire my ceiling fan with these other switches and outlet?