Does a leaking cell destroy the other cells in the same battery?

I have a device I have never used before. Unfortunately I found out that one of the device's 3 LR44 cells was leaking white potassium carbonate. See my sketchy illustration below.

I have only 2 new cells to replace the three. Even though I understand that it is best to combine cells that have common history, I started to wonder that, in general, does the leaking cell destroy or at least greatly degrade the others in the same series? If not, then the two with no leak would be fine and I could just replace the leaked one. If yes, then is it best for me to go shopping for more cells? 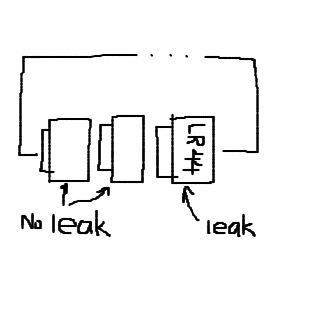 You're fine replacing just the bad cell. Clean everything & even sand or file any of the device's contacts that look discolored. If you have another device where the LR44's can go now or in the future write "spare" on them & replace all 3 cells. On the flip side, write the date on just the replacement cell so you don't toss that when the other 2 give out.

Not the answer you're looking for? Browse other questions tagged leak battery or ask your own question.

4
Why have cordless tools changed the battery style?
2
What does it mean if my Watchdog backup sump is flashing “Add Distilled Water” even with brand new battery?
2
Shower Frame is leaking (at the corner)
2
Why does the Tesla PowerWall operate at 350v - 450v?
1
Ceiling leaking from upstairs bathroom ONLY when water supply is turned OFF
2
Is it safe to use a battery charger to test the capacity of a non-rechargeable battery?
0
Fridge is leaking. Found the culprit?
2
Shower leaking out the grout
0
Estimate ROI of installing battery pack like the Powerwall