What is the easiest way to install multiple 5A BS546 sockets next to one another?

I intend to replace a wall light fitting with two or three 5A BS546 sockets for table-lamp-style lights: 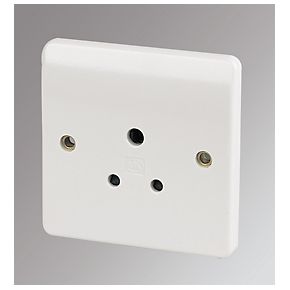 As far as I know there is no 2- or 3-gang variant for this socket, but I assume that it will fit onto a normal BS1363 box (right...?). So I assume I would have to install two or three of these boxes next to one another.

What is the best way of routing the wiring from one to the next? Will surface mounting be easier than burying them? They won't be easily visible and the wall is plaster on brick.

The easiest solution is probably to just fit surface mount plastic boxes and then run normal twin and earth cable (any size from 1mm2 to 2.5mm2 will be fine) between them. No need for conduit. Surface mounting is easier both because you don't have to make a hole in the wall and because surface boxes are the full size of the faceplate so you can just butt them up (flush boxes are smaller than the faceplate so if you want the faceplates to sit next to each other you have to space the boxes just right).

Normal surface mount boxes have knockouts at the back of the sidewall (intended for use with cables that are directly clipped to the surface of the wall). Be careful when knocking them out, it's easy to break the boxes.

You can get backboxes designed to take two single gang accessories on one box. I've also seen boxes for one single and one double but i've never seen one for three singles.

Another option is "Euro modules". While I have never seen a double or triple 5A socket as a single unit you can get 5A sockets in Euro module form and install them in a Euro module faceplate. This would allow you to put three 5A bs546 sockets on one plate, but you will likely have to order the parts from specialist suppliers. 5A BS546 Euro modules and 3 gang (6 module) Euro faceplates are both fairly unusual items.

Unlike Americans we don't normally clamp cables where they enter and leave back boxes. We also don't have prescriptive rules for box-fill. We do however sleeve our earth conductors which Americans don't.

Not the answer you're looking for? Browse other questions tagged wiring lighting uk socket or ask your own question.

15
How do I run ethernet, speaker wire, and coax through a wall into a crawlspace?
1
What's the best/easiest way to install and wire a wall light?
0
What is the easiest way to “detect” electrical installations (wires in wall)
2
When I turn the light on/off on one circuit, it makes the light “blink” off/on on another circuit
11
Turn one light bulb ON and another OFF at the same time with one switch
0
Led and basic light bulbs; 2 light sockets. One works with both bulbs, the other doesn't.
4
Wiring for Bedroom - how to express design to electrician
1
Add switches for two new lights to an existing switch box
0
Open Neutral Circuit yet all circuits outlets and wiring appear connected
1
Is it possible to wire up multiple 4 way switches with power coming into one 4 way and the lights connected to the other