The lever to the lift bucket was stuck and I didn't want to force it so I took the screws out and took out the assemblage and lift bucket to inspect. I cleaned off the lift bucket and put it back in. Problem was, it wouldn't settle down to where it should go. Something was blocking it. Obviously, that's what was causing it to stick. 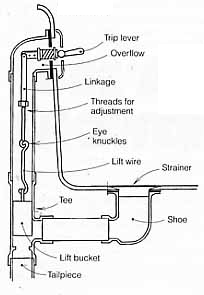 These get blocked by hair and soap buildup all the time there was probably some scum on it when you removed it (now matter how clean the tub is). An old wire coat hanger can be used to scrape around and pull the remaining soap/hair out. Or the purchase of a small hand auger and slide it in and rotate to clean. I really don’t like drain cleaners in these cases but if you can just put a little down and let it sit it may dissolve the blockage once it will seal let a small amount sit in there and rinse it down. But if using drain cleaner they sometimes discolor the plumbing / tub so I never over fill the pipe if I do use cleaner.

Not the answer you're looking for? Browse other questions tagged drain bathtub or ask your own question.

2
How can I remove a stuck bath stopper assembly?
2
Why doesn't the flange fit on a new bathroom faucet?
1
What caused a stuck tub drain stopper linkage and how do I fix it?
1
How do I remove this plastic shower drain cover?
5
Dishwasher Hose Clamps won't open
0
tub won't drain – I think lift bucket broke off
1
How to replace a Gerber Toe-push tub drain stopper?