How should I wire a ceiling fan when there's only three wires in the box?

I'm replacing a ceiling fan and it has three wires as is common: black, white, and bare ground. I have a two-toggle wall switch. One switch makes the black wire hot (for the motor), and the other switch makes the white wire hot (for the integrated light). So it looks as if the white wire in the ceiling is used as a hot for the light rather than a neutral wire as is common.

From the main power, there are three wires:

Black wire has nut that is spliced to both the Dual Switch (that controls the ceiling fan) and the other switch which operates the upsidedown wall outlet.

White Wire is spliced to just the upsidedown wall outlet. (no connection to Ceiling Fan)

All three bare ground wires are connected together.

So the Dual switch that controls the ceiling fan has The Black Wire from the main power to the top of the switch, The other top wire at the ceiling fan Dual switch is the BLack wire that runs to the Ceiling Fan (assuming to run the fan light, and the Bottom wire is the White wire which appears to operate with the bottom switch (of the dual switch) when it is turned assumed for the fan motor. 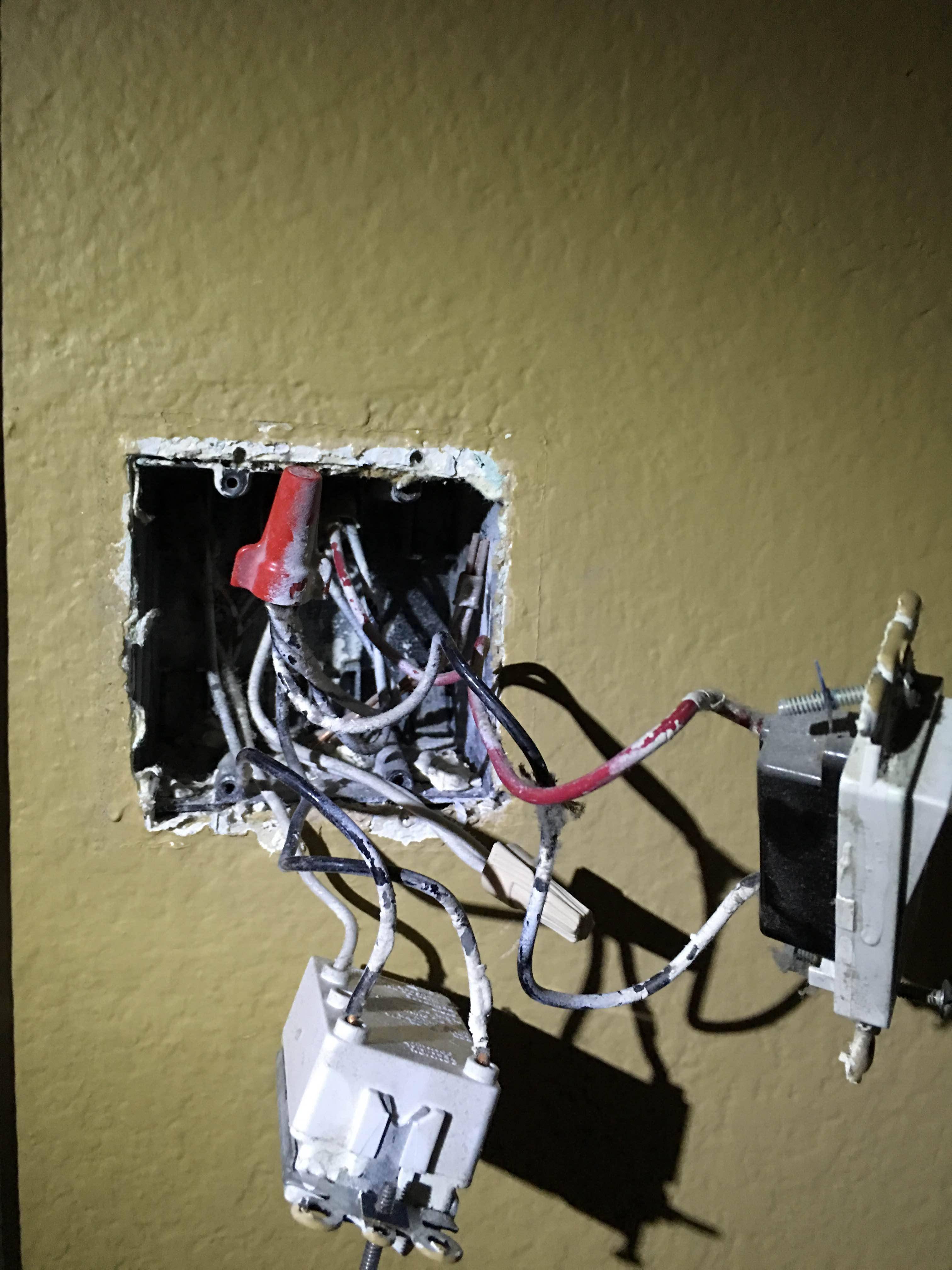 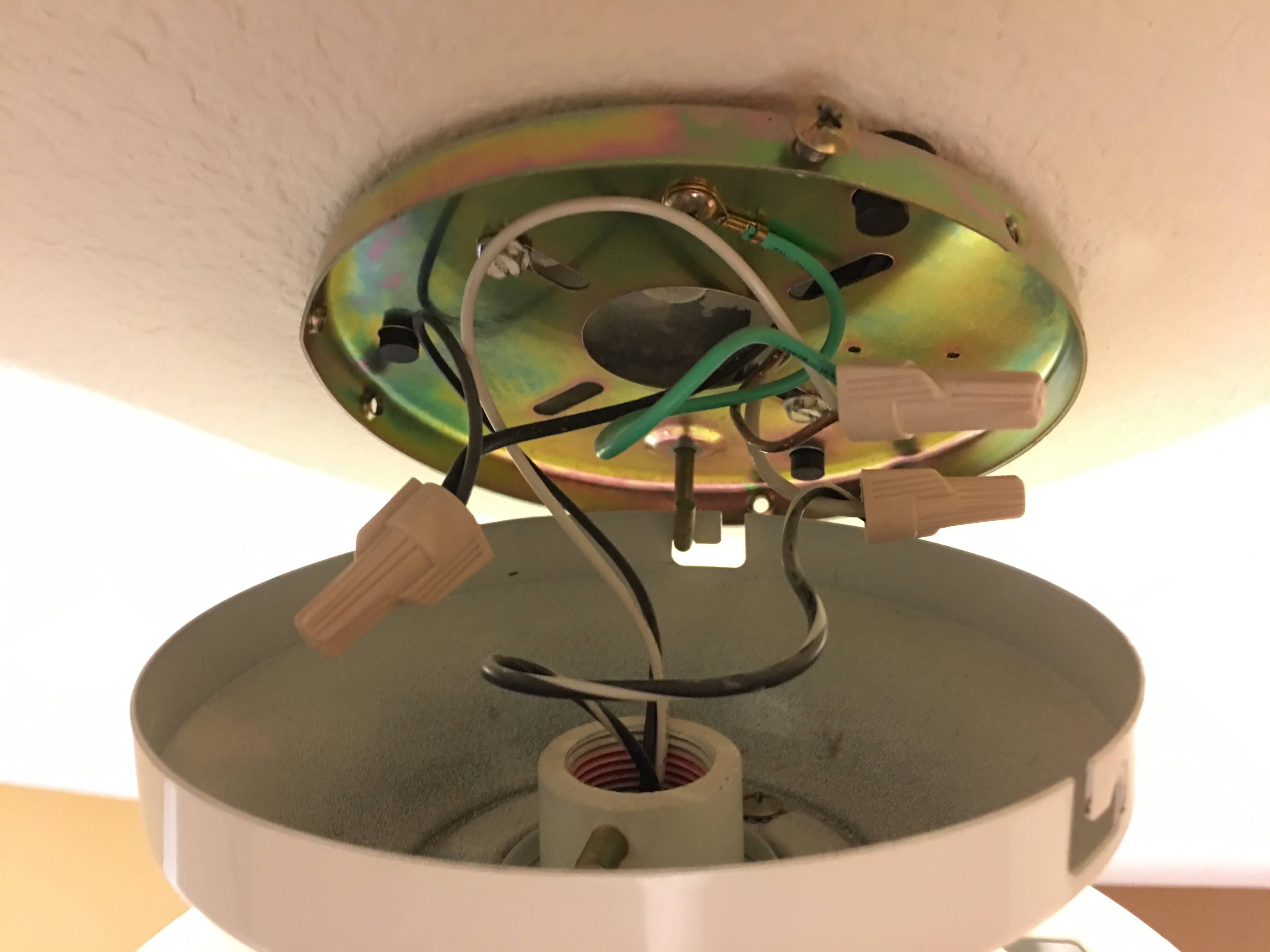 Crazy thing is this is how the home builder (Beezer Homes) wired the home when new in 95). I remember the builder was originally suppose to install 3-toggle switches in two bedrooms. They only installed 2-toggle switches. They corrected the problem by install the dual switch in place of one of the single toggle switches.

The fan was wired with the House bare ground wire being utilized as the Fan's neutral White Wire (and that being connected to the mount ground wire. The houses Neutral is the hot wire for the fan motor. Black wires are connected as normal and for power to the fan's light.

Someone took a dangerous and illegal shortcut to separating the fan and light switches. Rather than running a second hot, they're using the white as a hot and the ground conductor as the neutral. You should rectify the situation immediately by returning the white wire to service as a proper neutral. We can help further if you describe or post a photo of the switch wiring.

Your final comment about having no neutral in the house makes sense if you're confusing neutral and ground. Older homes commonly have ungrounded branch circuits. At the switch, you probably have blacks and whites, but no bare grounds. My guess is that the ceiling light box was added after the house was built using contemporary 14/2 with ground. Since the ground didn't have a function, it was converted to be used as a neutral for a split switch scenario.

Your builder should be ashamed of themselves for the ugly hack they pulled here -- using the EGC as a neutral's a big no-no, as that denies all the safety benefits of having a ground wire, and would trip a GFCI or AFCI breaker placed on the circuit.

However, it is possible to fix this without opening the wall to run new wires, in one of two ways:

Install a fan controller instead of the switch, and its matching receiver in the fan canopy

A dimming fan control system like the Lutron Maestro MA-LFQHW can be used to have control of the fan and light over the same hot wire using the canopy module. With such a kit:

If you do not want dimming or multi-speed fan control of any sort, you can replace the switch with a regular single pole switch and use a Functional Devices FL101 controller to provide On/Off fan and light control from the switch.

0
ceiling fan with a light