A recent dialogue with a potential customer "put me off" as it were when we discussed what tools he needed at the job (mostly finish work and some decking). I had offered to supply any un-common power tools he may not have had. He did say that if I had a "jig" to bring it. Hmmmm. I did a quick mental invoice remembering the jigs I had built or bought over the years. I have several that I use for clamping wooden picture frames and others for securing metal stock when welding.

When I asked him to specify the jig "type" and its' use he became upset and didn't want to give any details.

Question: If I asked you to borrow a "jig" what would you think I was asking for?

The only jig that is a power tool, is a jigsaw. 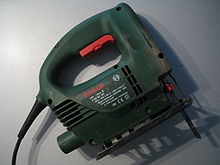 How about a jig saw? This all depends on the job, but sounds reasonable for woodwork.

Or I see these braces that they call jigs, some even for decking, although not exactly a 'tool': https://www.kregtool.com/store/c24/deck-jigtrade-and-accessories/

I think it would depend on the type of work you're doing, if you want to try and guess. If they couldn't explain to you what exactly they wanted, I'd guess they didn't know what they were talking about.

Tell them you don't know what they mean, and ask them to describe it. If they can't/won't, do a little dance, and walk away.

He probably meant something like a Milwaukee Sawzall style reciprocating saw. It would have quite a few uses in both disassembling the original deck and doing trim work on building the new one.

Jigs tend to be built up tools and tool guides to help create pieces or hold pieces together during assembly, just as you figured, I'd be thinking the same.

On a sidenote, there is currently a weird war on the term jig in some more politcally correct areas, something to be expected as we increasingly fail to have people in the manufacturing industry doing actual work and not able to recognize the word being used in its industry context. Which might be why he went a little weird as he might have thought the conversation was headed in that direction.