My home used to have a three-way circuit setup to control the upstairs hallway light from downstairs. However the home was built in 1930 and had old knob and tube wiring. The last owners renovated the home and "completely removed the old wiring and rewired the entire house." I've since found some of the old wiring scattered throughout the home, such as in the attic, but it would always have new wiring ran along beside it. We were told that they'd disconnected everything and left some of the old wiring and such because it would be a pain to remove the dead system, but that it was all completely useless.

The problem now though is that at the bottom of the stairs we have three switches (one for outside, one for the living room there, and one for the hallway upstairs.) The three-way that's meant for the hallway upstairs, wouldn't do anything. We were told that the owner couldn't get it to connect to the light 'for some reason' so he 'disconnected it and left it as a dummy switch'. I've since removed the covers from both boxes, hoping that I could fix his mistake, and I see that he's taken a lot of shortcuts. The switch downstairs is entirely wired up, and hot! It's the old knob and tube wiring attached to it, the old switch, and the old box. The only thing that was changed was the cover. The upstairs light is still using the old box, but has a new single pole switch and new wires: black, white (used as hot but not identified), and a ground. However, in the back of the box is two old knob and tube wires ran into the box and capped separately with wirenuts, of course they were also still hot and presumably the travelers from downstairs.

To make it easier when he rewired the upstairs, probably the only rewiring he did, he ran up a new sub panel upstairs (as the main is in the basement). So now I'm seeing that he ran the upstairs light and switch from the subpanel, and then had tried to connect to the downstairs switch, although it's coming from the main. I'm not sure where the old neutral from the main is at but I haven't removed the light yet to check and so it might possibly be in there, hopefully disconnected though. Other than that, I don't know if I have any way of getting new wire from the attic all the way down to the basement, easily at least.

Below is a crudely drawn version of what, I believe, we have going on. The yellow squares are wirenuts. I guess what I'm wondering now is if we'd be able to remove the hot wire upstairs from the sub-panel to the switch, change the single pole into a three way also, and let the old wiring use the new neutral in the sub to return to the main? 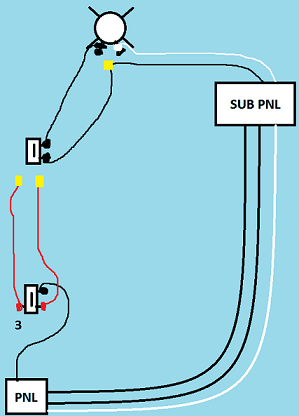 First -- the original wiring configuration was most likely a 300.3(B)/310.10(H) violation due to the hot and neutral taking different routes in addition to currently violating 404.2(C) due to the old-style switch loop -- what you have currently, though, is also a Code violation, but of section 210.70(A)(2)(c):

Fixing this without re-pulling travelers is possible, though, thanks to a gadget called a relay. You, or your electrician if you feel more comfortable having a pro do this, will need:

Note that while this setup may not appear to fix the 404.2(C) issue with the current configuration, it falls under 404.2(C)(5) as the neutral is available in the upstairs box:

0
Troubleshooting 3-way switch
2
I ran into two hot lines when replacing a three way switch
0
How should I wire this 2-way light switch?
1
Why would three-way switch travelers both show as hot?
2
Three-way switch circuit between house and barn - how to wire
0
3 Way Switch Wiring Weirdness
3
TWO ORIGINAL SWITCHES - ONE three-way and one single cant figure out wiring for SAFE UPGRADE
2
Resolving two 3-Way Switches for two separate lights on one Combination Switch
0
Three Way Switch Weirdness