Loose wire caused significant blackening in plug. How much do I need to inspect/replace?

The cable coming out of my dishwasher ends in an L5 plug of the type that has screw terminals inside for attaching wires. In my continuing quest to inspect all the accessible electrical connections in my new house due to the number of problems I've found, I opened this plug up. Upon doing so, I discovered that the neutral wire was loose and blackened, and that the entire screw terminal was rusty-looking and surrounded by an area of charring (probably someone who didn't understand that you need to rotate an L5 plug to disconnect it yanked too hard). The external neutral prong was blackened as well, but the blackening was so uniform that it looked intentional from the outside, like they just made one prong a different color.

Obviously the plug needs to be replaced, and the burned wire will need to be trimmed back at least a few inches. And even though it looks ok, given that the prong got hot enough to turn black, I should probably replace the receptacle it was plugged into as well (I think I will actually ditch the plug/receptacle entirely and direct-wire the thing; the manual says that's fine). Is this enough, or should I replace the entire burned wire and/or go through the whole circuit looking for other areas that might have overheated? And is it possible there is damage to the dishwasher itself (it's been running fine, as far as I can tell)?

In case it's significant, I should mention that this is a multi-wire branch circuit where the previous owner/my nemesis had connected both hot wires to the same leg inside the panel. This has been corrected, but the neutral could have been overloaded in the meantime. However, my intuition says if that's what was behind the charring, I'd be seeing it all over instead of at just one connection. Plus, based on their documented wattages, the two appliances on the circuit (disposal and dishwasher) shouldn't exceed 15 amps even when both run at the same time. 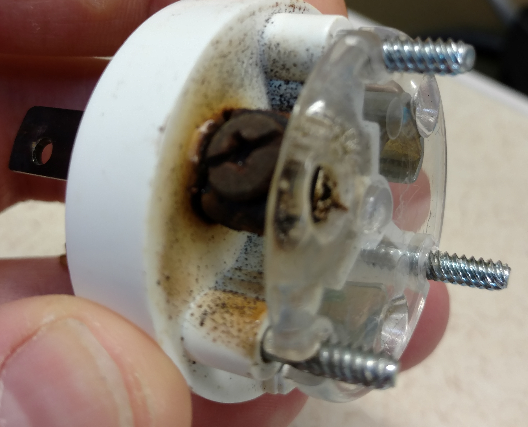 L5 is rare in residential. L5 and hardwiring would increase cost to maintain the dishwasher or disposal down the line.

I would trim the cord like you're thinking, and replace the outlet too. But I'd say you should install a GFCI there instead of hard wiring it, and here's why:

The dishwasher and disposal both are obviously going to be in contact with a lot of water which (if they break) could leak current to ground through your plumbing (bad bad bad).

It's handy to be able to unplug these things in a pinch, and it's nice to have a second outlet there in case you need to plug in a power tool or a charger or something later.

Unless you would have to move the dishwasher to reach the outlet, replace that L5 with a GFCI.

I would direct wire the dishwasher. The heat appears to be caused by a loose connection. (That was arcing I see this regularly where not tightened well). I would direct wire the dishwasher when you do this if the wire to the outlet is ok the rest should be ok also. The heat was caused by a loose connection that was arcing. If using stranded wire the best way to tighten is to take them down tight, then back off 1/2 turn, tighten then back off and tighten. This allows the wires to move around and have a better spread in the connector. I do this on everything 1 time for stranded wire under 14awg up to 3-4 times for sizes over 4/0. Make sure your box has a clamp to secure the wire. The dishwasher is probably fine but the arcing can shorten the life of the electronics. Good job on correcting the multi wire circuit make sure you identify it in the box so it doesn’t get split in future work.

Charring is usually from arcing, so replace the plug/outlet, and cut the charred part of the wire off. And wire it right please.

I wouldn't direct wire any appliance besides for permanent non movable dedicated circuits (electric tankless hot water heater, AC, machine motors if you're into those kind of things) basically anything that needs the entire circuit breaker rating and can flip if something bad happened.

4
Why was the ground for this fluorescent fixture not connected to the ballast?
1
How should I use the ground wire for this welder?
1
How to wire a three phase machine to a single phase plug?
0
How do I wire a 4 prong plug into a an old receptacle with only red and black wires with metal conduit into metal box?
2
Code requirements for moving 3 prong dryer outlet
0
GFI on a 3 prong plug keeps tripping
3
Can I run THHN for separate washer and dryer circuits through the same conduit?
0
Should I replace a stove wall outlet that became loose but we bent back the prongs?
1
Loud circuit breaker pop with burned neutral wires. Need advice on next steps. Photos in description