Can I use a non-standard design for a stairwell ceiling cutout in an old house?

I am designing the framing for a stairwell in an 1870's cottage, which is presenting a few extra constraints. What seems to be the standard approach throws up a couple of additional issues, and I'm not sure if my solution has any weaknesses or is invalid in any way.

We are adding a staircase which must penetrate the top of a wall as the rooms are less than 3m wide, and therefore it cuts into two different ceilings. One is tongue & groove the other is original lathe & plaster. Both of which are heritage and we need to preserve and not damage as much as possible.

The existing joists aren't perfectly made or laid, being roughly 50 x 140mm of very hard old timber (ironbark), and spaced roughly at 450mm standard, but there's a lot of variation. Of course they cannot be moved.

This is the existing joist layout in the area affected. 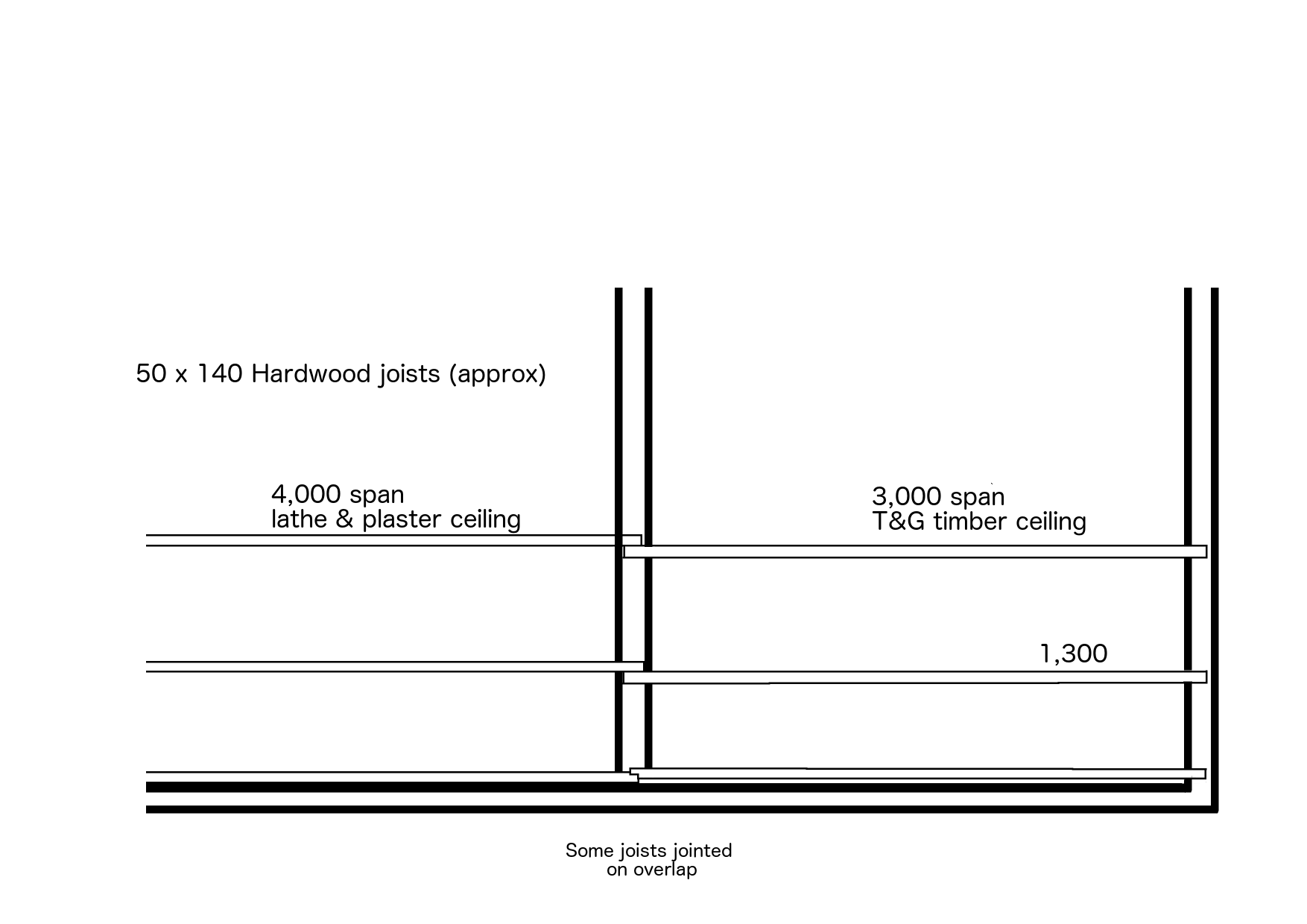 The joist along the wall is a bit crooked, and will need to be cut away to provide a clean stairwell.

The stairs we intend to install are like this. They are made and installed by a company who is expecting the penetration to be ready to go.

The staircase has a turn at the top (due to headroom constraints), so must land on a new trimmer joist, parallel to the existing joists. 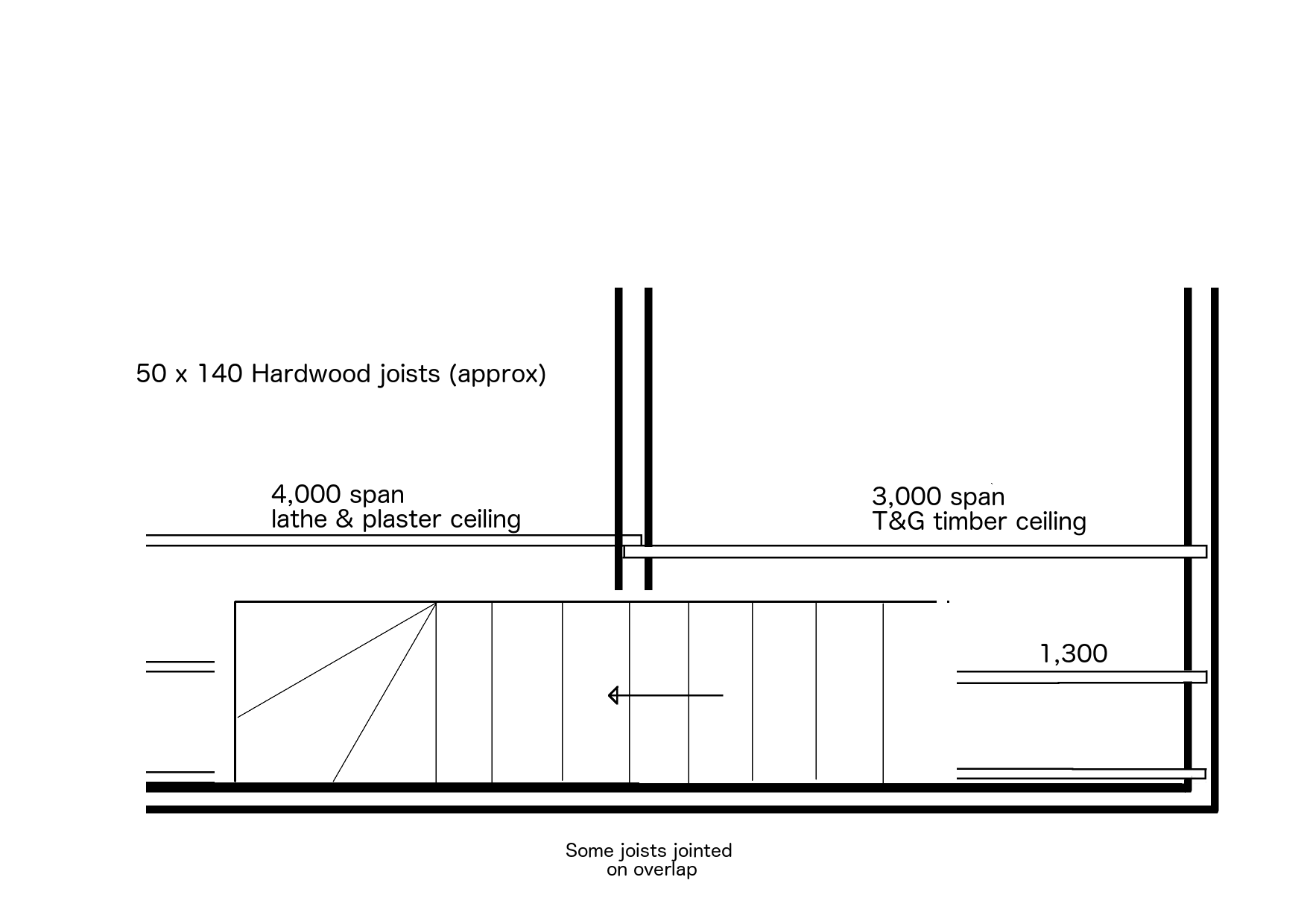 My first attempt at the cutout design, following the normal approach is something like this, with double headers and a new double trimmer joist spanning the entire house. (They might not have to be double as the spans aren't big.) 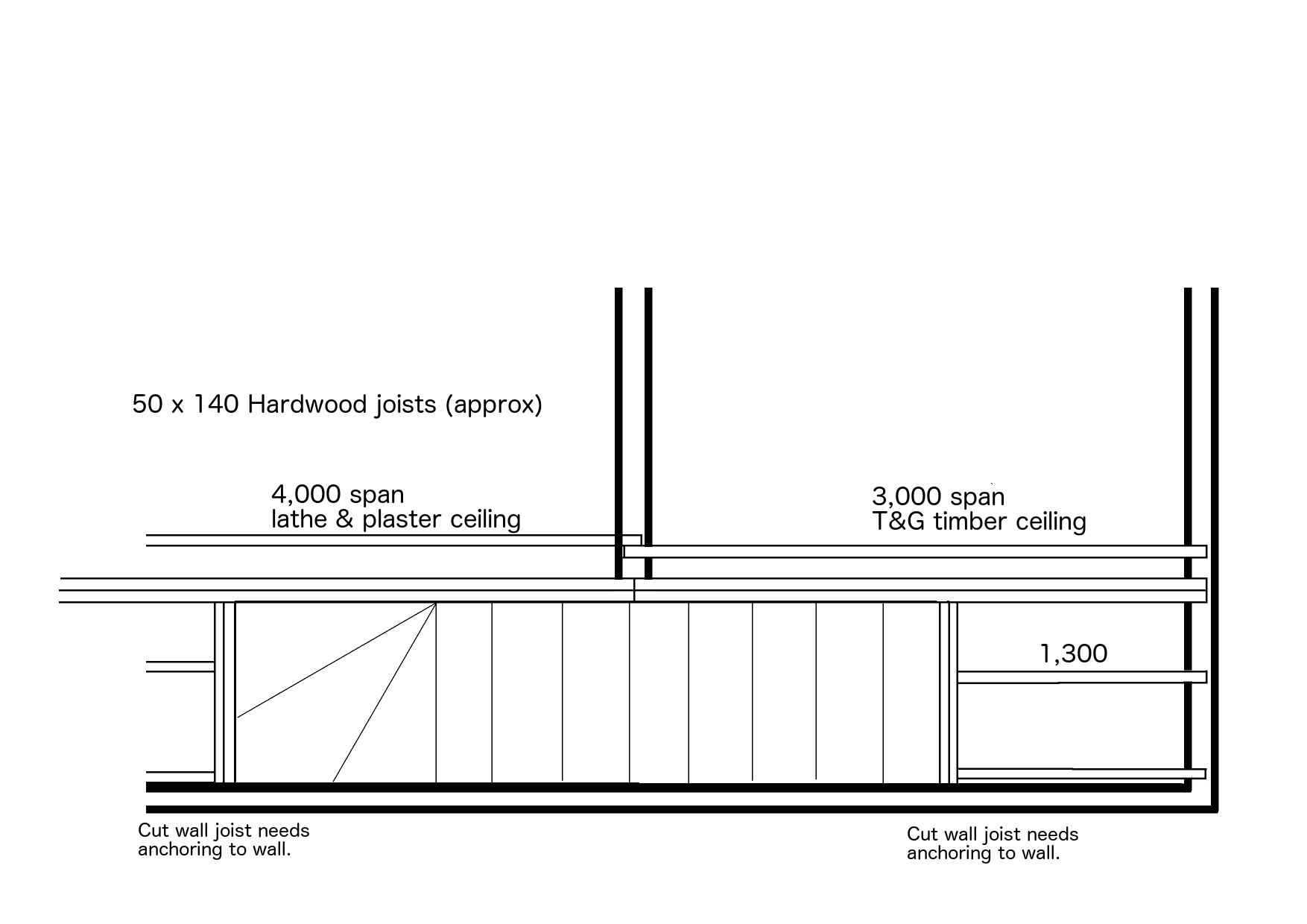 The problems with this design are that the "wall joist" needs to be cut as the stairs run along the wall. I presume this is a common problem, as it's a common design. I presume I should anchor the cut ends of the joist to the wall using bolts or a 90° joist hanger or bracket of some kind.

Is there another solution to this cut joist which still allows the stairwell wall to be clean and uninterrupted?

The addition of the long new joist will not be possible on top of the lathe & plaster ceiling, as the plaster 'nibs' or keys are curling anything up to 30mm above the ceiling laths. So the new joist would either have to be only 100mm deep to avoid them, or they would have to be removed. The former would probably not be structurally strong enough? The latter would damage and weaken the ceiling, so I don't want to do that.

The overlapping joists on the centre supporting wall, cannot be staggered as they need to form a uniform line across the stairs. The wall is 250mm thick, but I am unsure if a 125mm overlap and a butt joint is acceptable.

My second design is to insert a single/double trimmer joist between the two headers, almost like another header.

On the right hand side, it's only supporting a tiny amount of t&g so it's almost cosmetic. In the centre it's sitting on a supporting wall, so it's very well supported. On the left, it is the landing point for the stairs turn, so I know this needs to be solid. The span from the centre wall to the header is only 1,400mm. 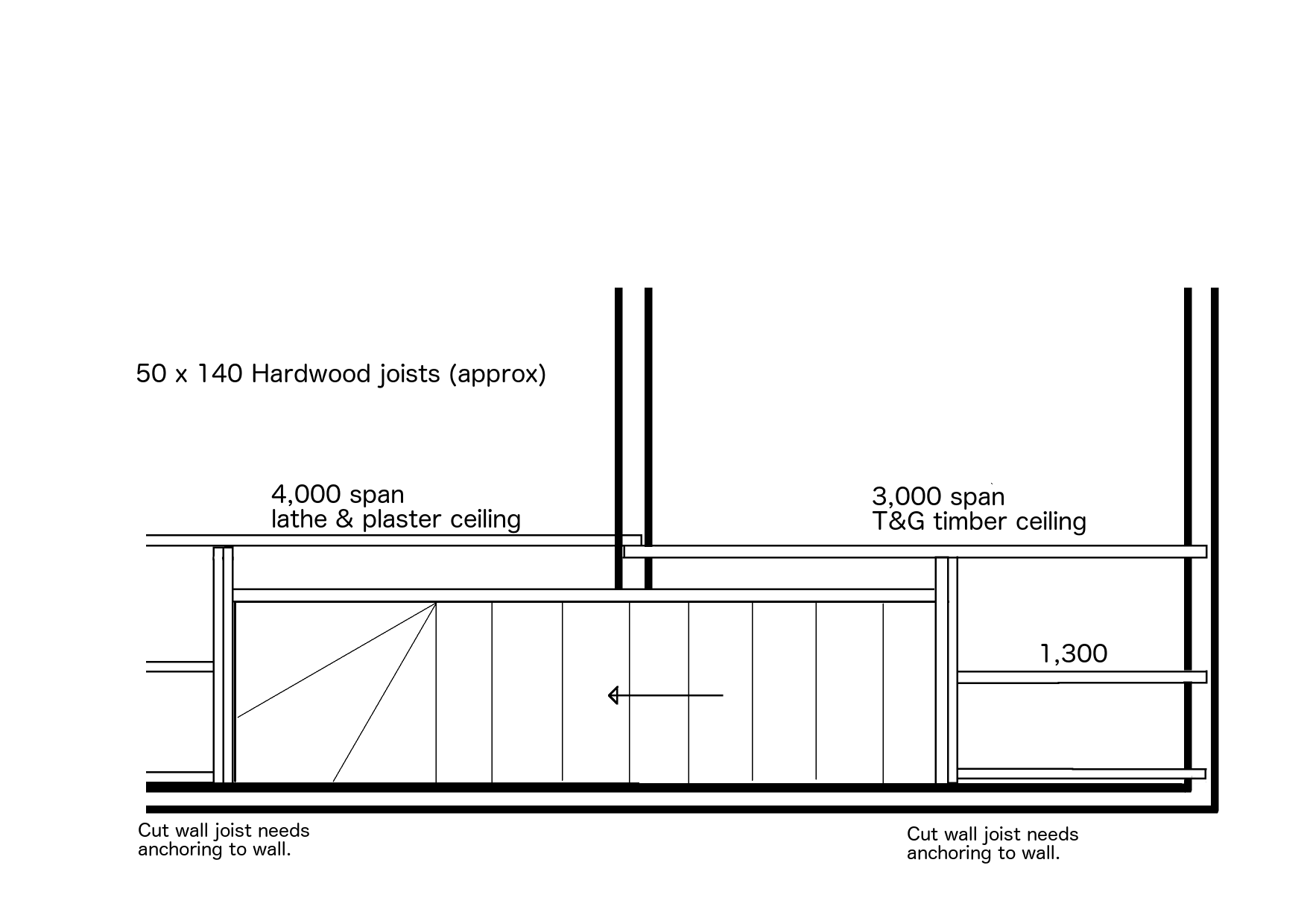 This design still has the same "wall joist" cut as the first design, and raises further questions.

I don't know if this design is "valid", as it's difficult to see how the load is transferred from a header to another "sub header". It all feels a bit non-standard, though it seems to be well supported.

Is it acceptable to invent a non-standard design, to cope with a unique situation? Are there drawbacks to not using the tried-and-trusted layout?

We have decided to keep the "wall joist" and make it a decorative feature on the wall. I realised there is no complication with the wall stringer as I had originally thought, as the stringer never reaches this joist before it turns to the right. It will also provide delineation between the downstairs plaster, and the bare sandstone walls upstairs.

Unfortunately, as with most questions like this, you're going to have to talk to an engineer. A bunch of amateur DIYers on the internet, is not the proper resource for this type of information.

You're making a major structural change to a building, and you don't want it to cause property damage or personal injury. The "correct" and responsible thing to do, is to seek the advice of a trained professional.

Since stick framing has been around so long, and there are so many millions of stick framed structures around, there really aren't many unique situations. Getting creative can be BIG trouble. I don't think I have a real clear picture of your framing from the diagrams but enough to make some remarks.

RE #1 - Cutting the "wall joist" - that's a particularly important piece of wood; using some kind of fitting at the ends is't sufficient.

RE #2 - Shrinking the joists to accommodate the plaster will make them too small for the span. (That's the tail wagging the dog, weakening the structure to spare the finish.) You can however remove the plaster above the lathe. This isn't your biggest problem.

RE #3 - The butt joint as drawn is no good but there's probably an easy way around this, for example you could use a piece of engineered lumber, but this is the least of your worries.

RE #4 - I think you are starting to see the bigger problems at this point - you're compromising crucial parts of the structure that carry the loads.

There are other problems.

... is it acceptable to invent a new non-standard design to cope with a unique situation, if the structure is technically sound. Or are there other drawbacks to not using the tried-and-trusted layout?

It's OK to do something unusual that's structurally sound, but that determination needs to be made by a structural engineer or other qualified expert. That is probably a code requirement depending on your locale, but it's a good practice in any event.

Design 1 is the only typical & proper design & should be presented to & approved by the Heritage Society & Local Building Department. You actually have quite the rubber stamp situation with that central bearing wall. It really couldn't be better nor more straight-forward.

Don't worry about saving a pitiful 25mm here & another 25mm there on the ceilings or wall when you're taking out the whole end of the house's ceilings. That ceiling & wall stuff is going regardless, in order to do it right.

You'll have another stick or 2 to add before you're approved & you should calculate & list what you're re-using & where.

Not the answer you're looking for? Browse other questions tagged ceiling framing stairs design or ask your own question.

1
How do I find the angles for baseboard on an outside stair stringer?
0
LVL Span Ratings and Beam Placement
0
Staircase Design Review
0
Double header for skylight frame
1
Necessary to sister joists in skylight frame?
1
Can I attach wall studs directly to sleepers on the ceiling joists for an angled climbing wall?
0
Help with framing around old basement stairway
1
Rotating a staircase and making a new landing. How do I support it
0
Can I move a joist a few inches left without the ceiling falling on my head?