Adding a switch to control a basement light

Had an old ceiling light socket in an un-finished basement that had used a pull chain (before it broke). Recently replaced it with a new plain socket, but there is nothing to turn it on and off except unscrewing the bulb. I'd like to add a single pole switch nearby (no more than 10ft or so).

My plan would be to run a single line from the light box, parallel with the floor joists, in flexible conduit, up, over and down to a switch box on a 4x4 post. There is nothing else running to/through the light box as of now, so I'd simply hook it up as shown.

(red being neutral...and the ends would be marked to indicate they are acting as hot) 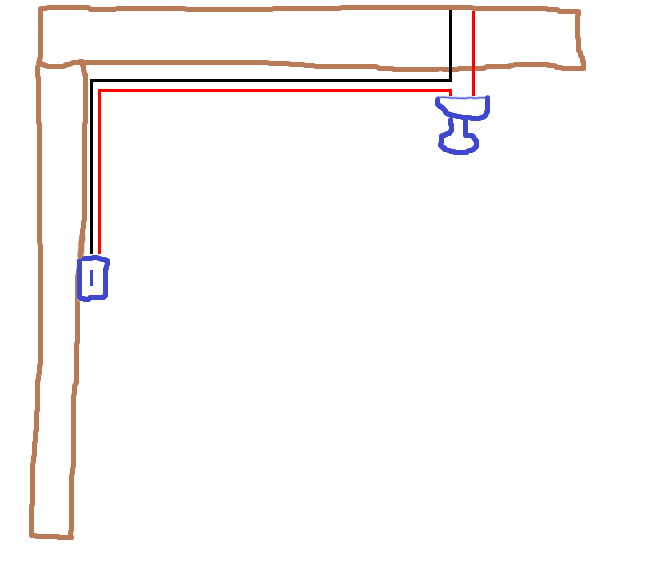 There wasn't a ground running to the light box, on the old socket, or on the new socket as far as I could tell, would that be a problem at all?

I'm assuming that just leave the wire exposed, without some kind of conduit would be a no no if it's extending down below the joists, correct?

If I wanted to add an outlet at some point, running from the light box, would I simply tie it in to the hot and ground running to the box? And if I added an outlet, would it be a problem not having a ground? (I might just be able to detach the source wire and strip the ground back if there is enough slack)

The switch you plan to add will work fine without a ground. Do make sure there wasn't one tucked away in the lighting box, or trimmed back. It is very rare not to have a ground in every cable unless it's a very old house.

If you want to comply with the strictest codes start by ripping out the existing light circuit, then run an all new circuit to the switch first, then to the light.

The conduit is not necessary to run down the wall if it's stapled properly to the inside of the stud cavity.

As for the outlet, you should branch it off of something grounded, or go to the effort of running a new circuit, so that you can have gfci in an unfinished basement space.

Or if it's something you won't use often, or doesn't have a grounding pin, consider those adapters that give you two ungrounded outlets and a light socket from one light socket, and an ungrounded extension cord. Iirc, there are ones that have pull chains for the light too.

2
Adding new lights to a switch
1
How can I wire a GFCI combo switch so that the switch controls the receptacle?
2
Adding an outlet to a light switch, just want to make sure I have the right idea
1
Adding wall light switch for future ceiling fan light option
0
Add a switch to an overhead light
0
How can I subfeed a single pole switch from a 3-way switch to control a fluorescent light?
1
Can I add a light fixture (with a switch) to an existing switch/outlet circuit?
1
remove single pole switch that control outlet
2
Turning an unneeded outlet into a light switch to power LED lights