How to fill a hole in the living room?

There is the circular hole in the floor in my living room near radiator which leads to a relatively big space underground! If I want to judge using my eyes,I think the size is around 50cm/1.5feet depth and 30cm/1 foot width and 30cm/1 foot length. I think a mouse entered my house through this hole which is man made. I don't know why there is such a hole near radiator.

I cannot completely fill the hole because it opens to a larger space. I want to lay a plastic sheet over the hole and then push the sheet into the hole. Now I have a cup-like plastic sheet inside the hole which I can fill with cement or mortar.

I am wondering which is better, mortar or cement? I think cement must be better because mortar is made of cement itself and sand and lime. Thus I think the cement must form a stronger piece of solid.

I would be happy to know about other possible solutions too.

Here is a photo: 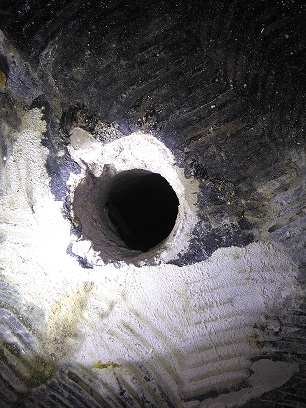 There are two solutions that should be easier and cheaper than cement or mortar.

Cement could certainly work, if you can get it to stay in place while it dries. Get some steel wool, which mice won't chew through, and a can of spray foam such as Great Stuff (there's even a pest repellent version of it available at Home Depot). Stuff steel wool around the hole and fill it in with spray foam, which will expand and can be trimmed with a knife after it dries. This will keep bugs out and the steel wool will keep mice from chewing through, and it's fast, easy and cheap.

Alternately you could get a small piece of sheet metal. Use some construction adhesive to hold it in place and it should keep bugs and mice out.

This slab situation needs much more, than a patch. Assuming there's no floor, wall or ceiling cracking...yet. After, confirming it's not erosion & the beginning of a sinkhole (wait for a heavy rain or soak the exterior with a hose).

The space beneath the hole really needs to be filled as completely & tightly as possible. Enlarging the hole to as much as 3-feet may be your best bet, UNLESS you can shovel into the void from outside. You'll still want a bigger hole (4 to 6-inches) for a 2-sided attack.

A lot of 1-inch or larger stone or gravel needs to be literally stuffed & tamped into the void under any part of the house & a little bit beyond. Then you can pour cement in from the top to lock some gravel together & fill the living room hole.

First, lets make sure there isn't a radiator valve down there. If I had to guess, that's a hole from an old radiator, or it was made as access to do a repair job. If you see some pipe down there but no valve, your probably safe to fill it. Filing away a picture if there is pipe would be good, too.

User35 has sound advice if you simply want to plug the hole; foam plus steel wool. But your floor looks like concrete, at least top side. I'd shove the cavity full of newspaper to support some new concrete in the hole. Mortar would work; concrete with small aggregate would be better. I wouldn't worry about rebar or anything like that; it's a small hole and should bond well all by itself.

That is, assuming it isn't as giant a cavity down there as you make sound like. If you can stick a tape measure in the hole and it stops after a foot or so, then whatever. If it goes in like three feet, you might want to start asking yourself if this is normal for your type of foundation.

That would be normal for a crawlspace, but highly alarming if its a slab. It's not uncommon for the earth to subside up to a foot under a slab. Anymore than that and you should take a good hard look at what's going on. There's also the possibility this hole was made just to take a look or as a core sample.

Not the answer you're looking for? Browse other questions tagged pest-control mortar hole pest cement or ask your own question.

2
How to get squirrels out of inaccessible attic before plugging their entry hole?
7
Can I fill a drywall hole with something and reuse the hole?
0
How to correct this pointing?
1
Medium-term repair for spalled foundation with exposed mudsill
1
Fill a hole around a radiator pipe
0
Bluestone pavers for front stoop?
1
How can I fill a drywall hole in a corner?
0
Backfilled concrete piers with more concrete