I may be missing something, but how useful is a cord reel such as the one pictured with a 100-ft long extension cord? 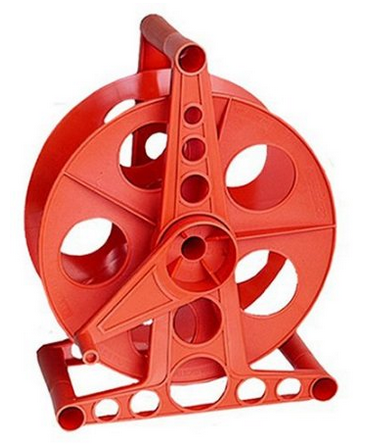 I'd like to think that a 100-ft extension cable with a pretty good gauge (12) would act as a substitute for a 50-ft and even for a 25-ft cable. But after winding on such a cord reel, one end will be inaccessible, and so even to use it as just a 25-ft extension, I'd have to unwind the whole thing out. Is that right?

I saw suggestions online to buy a specialized reel that picks up the extension cable from its centerpoint. That would solve the problem, but it would also introduce a stress point through excessive bending. Yet another suggestion online is to avoid a reel altogether and use a piece of wood, though I'd really rather not spend half a day fabricating something like this myself.

Those cord reels are very useful. You'll need a BIG one to hold a 100' 12 gauge though. If you leave 6" or so hanging out one of the big holes on the side, you can wrap it with the end accessible.

I wrap these with the female end on the spool, so you plug it in first and walk to where you're working. I guess it works OK either way.

They make cord reels with receptacles on the spool ... 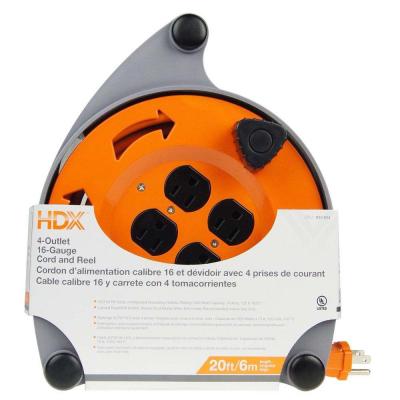 and those work great except when you're working on a ladder. Sometimes the cord on the tool isn't long enough to reach this thing on the ground.

When you're working on a ladder it's nice to be able to pull some slack off either end. This is a pretty good way to go: 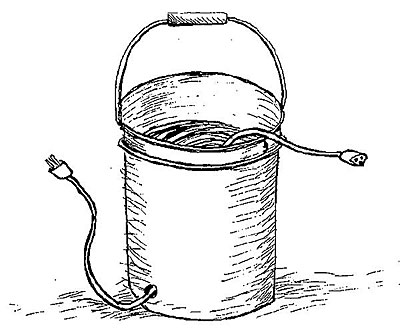 That's from a tip sent into Fine Homebuilding. 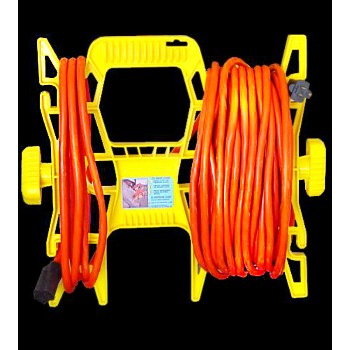 does the same thing as the bucket trick, if you'd rather not do it homemade.

One other thing to get if you're shopping, a portable GFCI 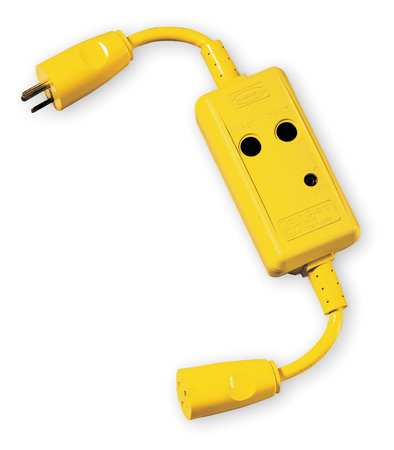 In point of fact you are not supposed to use an extension cord without unreeling the whole thing, due to potential heat buildup. The not-a-liability-lawer approach actually pays attention to the load on the end when making that decision in practice - if running a heavy load or a continuous moderate load, don't leave it rolled up.

There are a variety of approaches to make the inner end reachable, such as clipping it to the side of the reel. If it takes you half a day to make a wood version, you are overthinking it or working remarkably slowly.

Personally, I would recommend learning how to "flip-coil". It's kinder to the cable than most of these alternatives (especially important with more expensive and more fragile wiring like sound reinforcement), it pays out without tangling, and once you learn it you'll find it useful for everything frome rope to hoses. Easier ti demonstrate than describe, but if you can't find someone to teach you it's not hard to find vids and/or diagrams on the web.

Not the answer you're looking for? Browse other questions tagged extension-cord or ask your own question.