How to best reconfigure this plumbing for cabinet replacement

My wife and I are fixing up our current house so we can put it on the market. We are replacing all the kitchen cabinets and the plumbing under the sink is right out of a Dr. Seuss book: 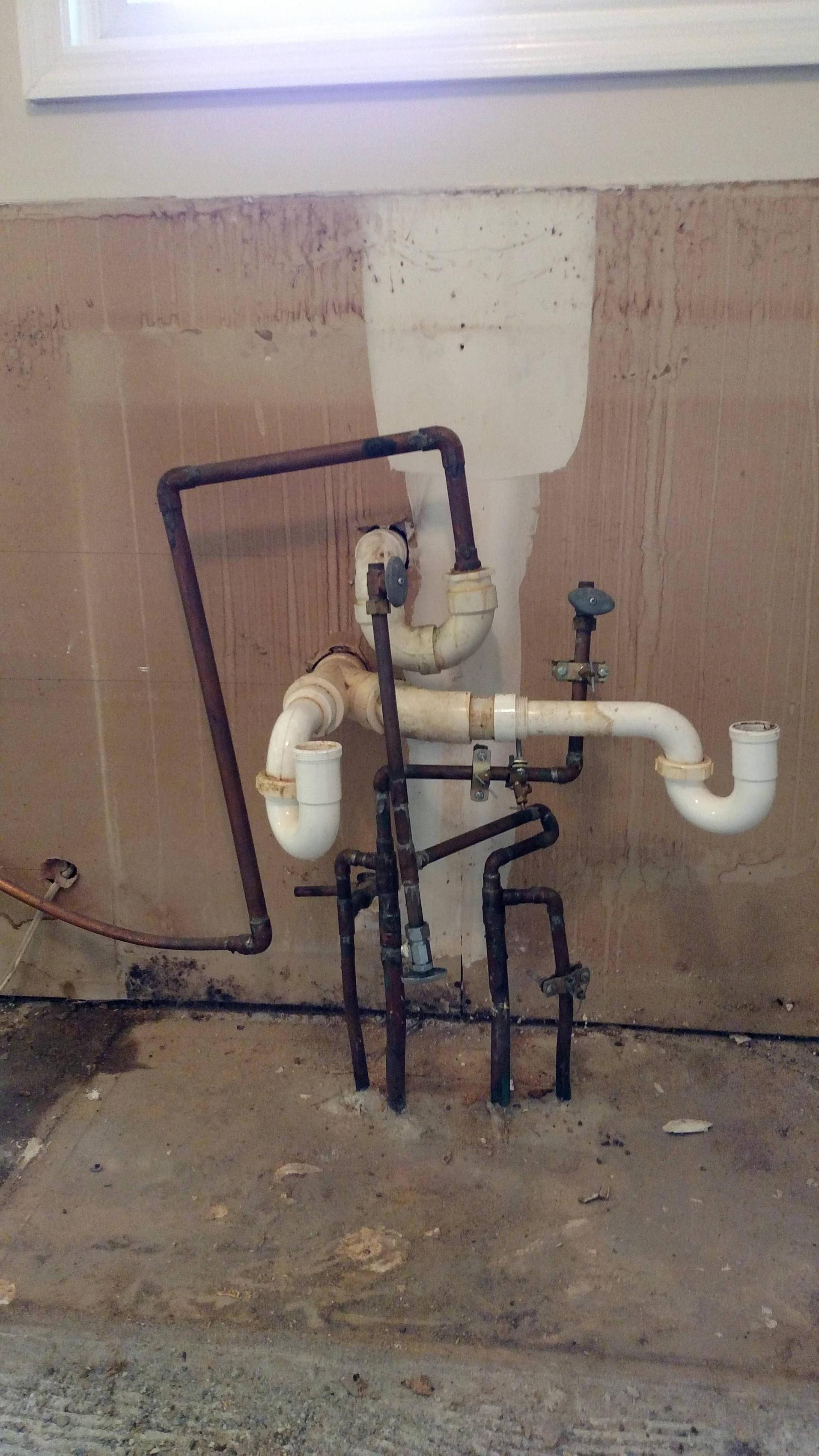 So, there are two 1/2 supply lines coming out of the floor. The first tees go back in to the floor to supply a wet bar in the adjacent room. I believe that the drain lines both take a left turn inside the wall and tie in with a larger pipe that goes through the slab and under the house. The upper drain was for the dishwasher, the lower for a double sink with garbage disposal.

What is the most efficient plan that will undo this mess and allow easy installation of the new cabinet. One thought I had was to simply cut the 1/2" and 3/8" lines as high above the slab as possible and then install shutoffs on the 1/2" lines. Or would it be better to simply cap them, install the cabinet and then do all the supply plumbing after?

For the drains, would it be best to abandon the separate dishwasher drain and just run it into the garbage disposal? If we go with a single basin sink, and the wye is practically inside the wall would it be better to cut it off add a straight coupling and a straight stub piece? I will most likely need to remove/replace the drywall around the drains so I will have access to the drain piping in the wall.

If that was my house, I would end up jackhammering up all of the copper supply lines coming out of the slab, or capping them off and abandoning them. Copper supply lines can develop pinholes over time if directly exposed to concrete and create a leak inside of the slab. Leaks like this are not always discovered quickly, and the repairs can be costly. There could actually be a leak now without even knowing about it. Sometimes the only way to tell is that the water bill suddenly becomes much higher than usual. Depending on your locale, direct bury of copper supply lines is also against code.

It appears that all of this work was not originally done by a licensed plumber. A licensed plumber would not have split off the supply from the main sink for the bar sink. They also would not be allowed to install saddle valves. There appears to be 4 in total. I am not sure what they are going to. I am guessing one is for the refrigerator, or a reverse osmosis system, but I am not sure. The drain is also running uphill which would cause the sink to become clogged on a regular basis. There is evidence of a leak there because the wall is stained and has mold on it.

Since you have a slab, I would recommend running the new supply lines above the ceiling and down the wall. Since the supply is going to be on an outside wall, I recommend using PEX instead of copper due to the freeze risk. Instead of branching off of those supplies, I recommend running separate supplies for the bar sink, fridge, dishwasher, refrigerator, etc.

The next step would be to address the drain. Remove the drywall immediately surrounding the drain. You want to expose the stack in the wall and make sure that it is vented. The drain for the dishwasher is not in line with the sink drain, so I am not sure what is going on inside of the wall. Assuming that it is all one drain, cut the stack right above the bottom wye, and above the upper wye and remove the piece. Install a new wye and use a piece of pipe and a coupler to reconnect the vent to the stack. When doing this, you want to check the height of the inlet to make sure that it is in the correct position for the rest of the plumbing. You don't want it so high that there will be water in the bottom of your sink, and you wouldn't want it so low that you could not install the trap without it hitting the bottom of the cabinet. Once that is in place, then you can install the trap adapter to the wye. The adapter has a compression fitting and allows you to completely unhook the trap for cleaning. You would not want to glue it in like it is now.

You can run the drain directly into the garbage disposal. In order to prevent the sink from backing up into the dishwasher, you can attach the middle of the line directly under your countertop. This is often called a high loop. The water from the sink will partially go down the line, but stop before it siphons into the dishwasher.

If you open the wall, then replace the wye. If you don't, you can just cap it with a clean-out cap. Those are always helpful. And if you do replace the wye, also install a clean-out. Some local code requires it now, anyway.

For the water lines, I would cut them as high as possible, except for that one on the right with the saddle valve; cut that one just below the valve.

Whether to fix do the water line plumbing now or later is up to you. Personally, I would do it all now and then fit the cabinet over it. Install ball valves to feed the outgoing water lines for the wet bar. Also install valves for the sink faucet, dish washer, and whatever else needs water. Saddle valves are the enemy!

If you decide to do the plumbing after you install the cabinet, I still recommend you do the valves for the wet bar before installing the cabinet. For the other under-sink connections, you can build and solder those together outside the cabinet first (dry-fit the parts to make sure they fit). That way you only have to do 2 solder joints inside the cabinet.

It looks like the "wet bar" was an add-on and the plumber just did whatever hack thing was most convenient for him at the time.

In all probability you might want to just leave it, because doing it right will be expensive.

If you want to make everything good and correct, you should add a drain for the dishwasher and connect the "wet bar" to the water lines in the proper way (from lines coming from the basement, or where the water source is), not from the kitchen. Then remove the branch lines here and just have a single hot and cold line to the kitchen sink and dishwasher as normal.

30
Why does my dishwasher back up into the sink, but running the disposal allows it to drain?

5
Does a dishwasher require a disposal?
2
Have a new Samsung dishwasher that emits a sewage smell while running
1
How to make this drain better
2
Moving kitchen sink in slab foundation
1
Dishwasher drain backing up into sink
3
What is this flexible hose under my bathroom sink for?
2
Backed up kitchen sink drain that gets worse when I run garbage disposal
1
Which peninsula sink vent strategy is best for this situation?
1
Will separate dishwasher drain cause sewer gases and wet dog smell?
1
Help me remove kitchen sink cabinet plumbing