I spliced 120V AC wires coming to the lamp so that I would have electricity for the USB adapter that would power USB camera (USB is used only to power the camera. The actual data transfer happens over WiFi). I put the USB adapter behind the black metal thing that attaches lamp to the wall. 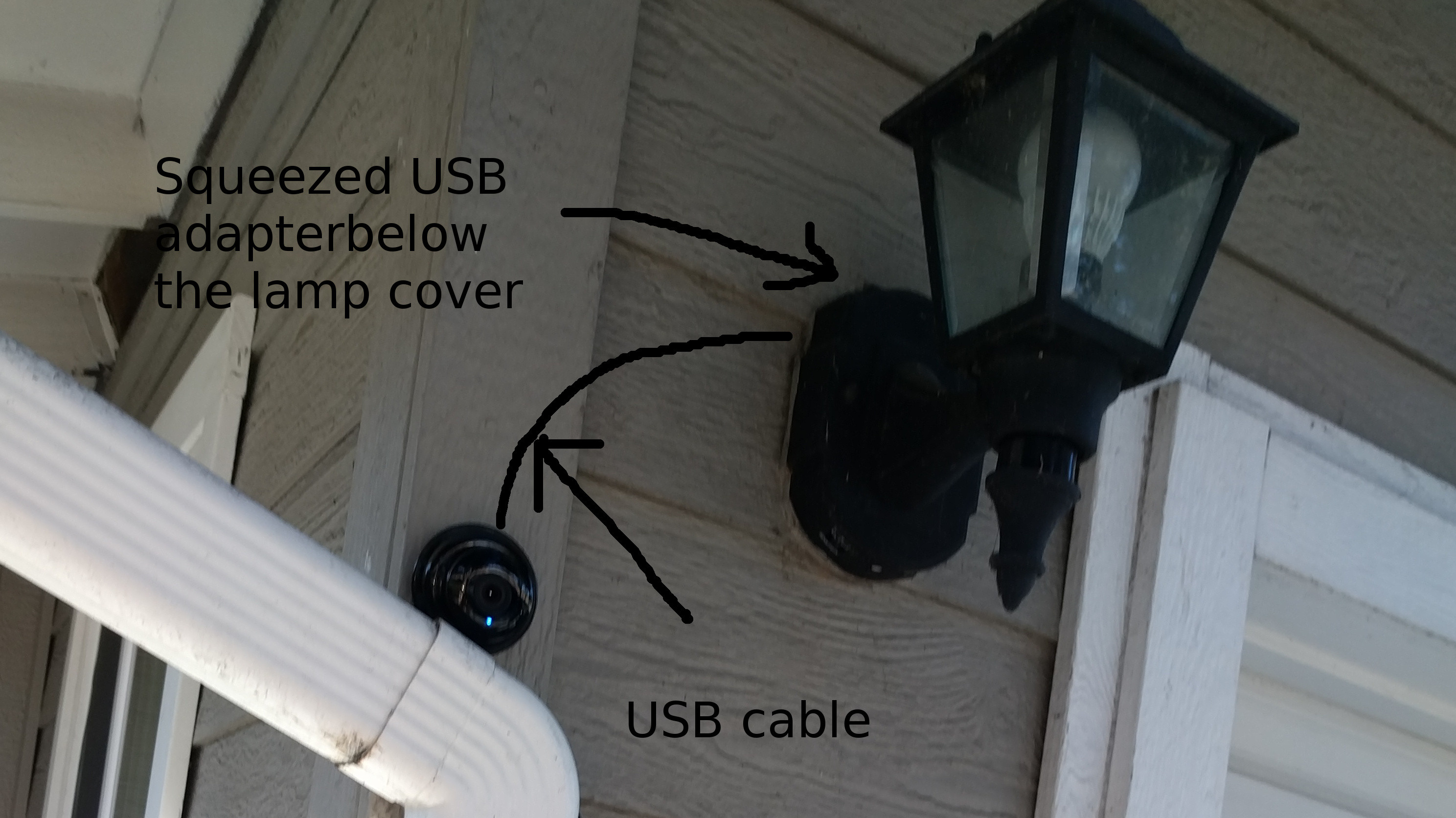 While everything is under the roof and should not directly get in touch with water I still had this "awesome" idea to wrap the USB adapter into a plastic bag "just-in-case" water would somehow get there. However, now I am having second thought about this awesome idea because I am afraid that the plastic bag could actually facilitate condensate to form on the adapter and possibly damage it. 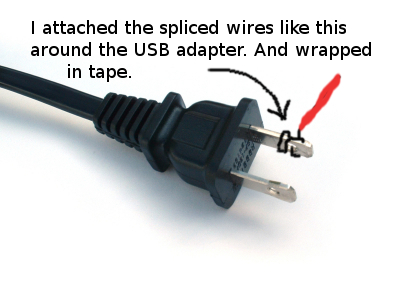 I wouldn't wrap this in a plastic bag at all. That will probably cause condensation to accumulate inside the bag and dramatically increase the chances of moisture dripping inside equipment where it will do harm.

I would instead look into waterproof connections. The cable itself won't be harmed by a little moisture, but water could enter sensitive equipment wherever cables plug in. For example, there are companies that let you specify your own waterproof USB cables. Or, make all of the connections, then seal around the edges of the connections with silicone.

The other answer (@ArchonOSX) makes a good point about rotating the camera so that condensation drips away from the equipment. Additionally; I would suggest making sure there is a downward loop in the data cable so that water runs along the cable to the lowest point in the loop then drips harmlessly off of the wire insulation.

But, I actually see at least a couple of big issues with this. I don't have the time to look up the specific electrical code around this, but probably article 725 presuming the U.S. NEC.

The USB power cable surely qualifies as a Class 2 or Class 3 low voltage circuit, and as such the electrical code prohibits you from installing it in the same box with a 120V supply circuit without using a permanent physical barrier, and so on. The code is the code and doesn't need me to justify it here, but one of the reasons is that there's always a chance of a short putting 120V on the low-voltage conductors, which could fry equipment or present a lethal shock hazard.

Another thing is that splicing 120V leads directly onto the blades of the transformer plug is not acceptable. The only acceptable way to do that would be to make a solid connection to an approved NEMA 1-15 female connector so that you could plug the transformer into it in the normal way.

Can you replace that camera with an actual weatherproof unit that supports Power over Ethernet (PoE)? It's easier to pull Cat5e (or Cat6 or better) cable through walls and terminate it yourself, than it is to pull USB plug ends through walls, and you may not have the equipment or expertise to terminate USB cables yourself. But with a PoE camera, especially if it has a weatherproof recess on the bottom for the RJ45 port, you can run it from a PoE switch or PoE injector inside the house, or in the attic where it's still protected from the elements.

1
What type of plastic is best for outdoor usage?
6
How can I mount a security camera on the outside of the house?
3
Suggestion to "Networkify" a dumb USB Security Camera
3
My question is, is this a possible/valid way to add a "hidden" outlet for outside IP camera?
2
Are voltage adapters suited for long-term use?
1
Wiring GFCI/Switch Combo
0
Extend power from outdoor frontyard lamp with a modified smart outdoor plug?
2
Checklist for installing proper electrical outlet outside the house
0
How much heat is generated by a ceiling fan's remote control receiver?