Hot wire splits into two neutrals that take different routes back to panel; is this legit?

I discovered this in the course of replacing an old ungrounded receptacle with a GFCI. I connected a run of lights controlled by three-way switches (two switches) to the load side. Afterwards, as soon as I flipped either switch, the GFCI would trip. It turns out that one of the lights in the run has its neutral routed back through the GFCI, but the other one is spliced to neutrals from other lights on the same circuit that are controlled by a different switch (diagram below). This gives two different routes back to the junction box upstream of the GFCI, which naturally makes it unhappy.

So first, is it ok to have a hot wire send part of its current back through a different neutral like this? If so, probably the simplest thing for me to do is just move the lights off the load side of the GFCI. If it's not ok, how should the wiring be changed?

Super-high-tech diagram. I used blue for the neutrals since the paper is white: 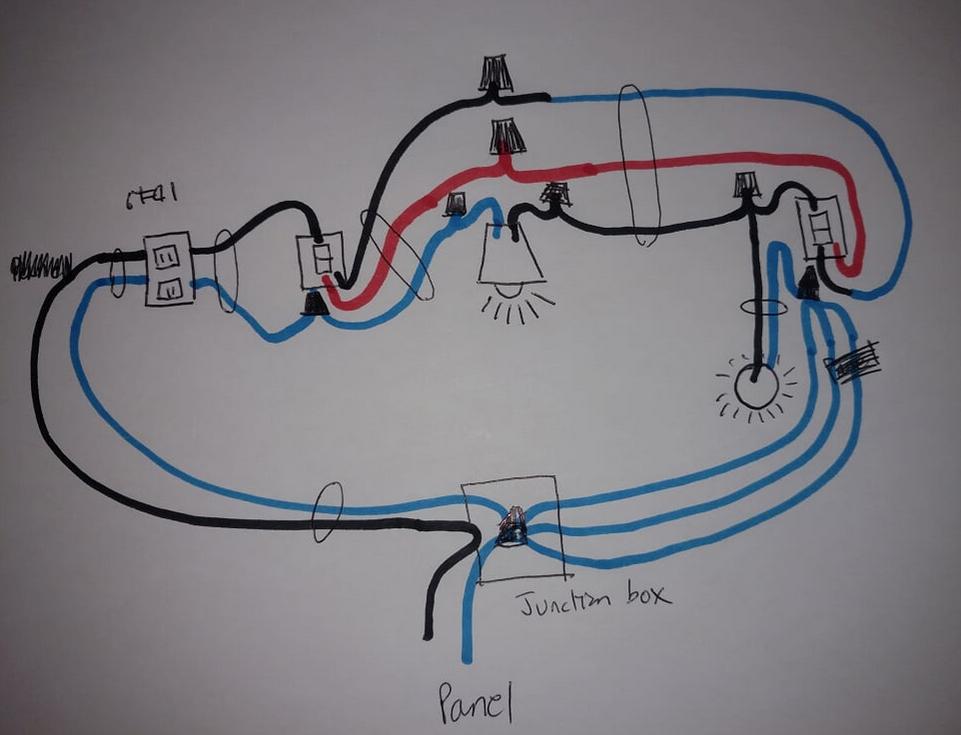 No, this will cause inductive heating if it passes through anything ferrous. Like a Romex clamp, locknut, MC cable, or steel conduit. It is called splitting a neutral and is really bad workmanship. Depending on the current load, it could become hot enough to start a fire. Change it as soon as possible.

Not the answer you're looking for? Browse other questions tagged electrical wiring switch gfci or ask your own question.

8
Can two circuits' neutrals be tied together (not a single neutral wire, but two that have been connected)?
4
How can I wire this three-way circuit between two buildings with only 3 conductors?
2
In a gangbox with switches on two different circuits, how can I identify which neutrals are associated with which circuit?
1
How to wire a switch-controlled GCFI but retain downstream protection even with switch off
0
Trouble with End of Run Switch
3
Safe to combine GFCI switch with non-GFCI switch?
3
Legal/safe? Neutral in box goes to different panel than the one that provides the hot
2
Can two neutrals on different legs of the same circuit be connected together to shared neutral of ceiling fan?
0
What wires do you splice in a 3-way switch?
6
Can the neutral and hot be split like this?